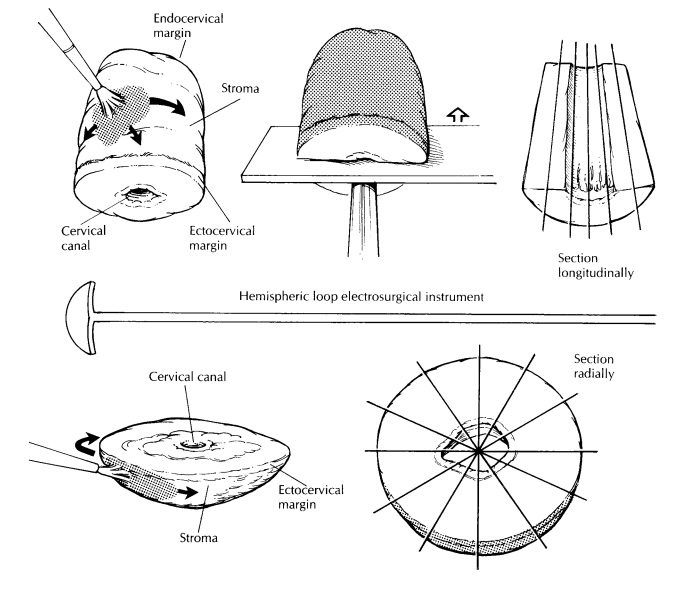 Cervical and vaginal biopsies consist of an epithelial surface and varying amounts of underlying stroma.

Cervical and vaginal biopsies consist of an epithe-lial surface and varying amounts of underlying stroma. Usually, no grossly identifiable lesion can be seen. The most important objectives are to orient the specimen so that perpendicular sec-tions will be taken through the surface and to secure the specimen properly to ensure that small pieces are not lost. These tasks can be accom-plished in several ways. If the specimen is large enough (i.e., greater than 0.4 cm), the tissue can be bisected perpendicular to the surface and marked with either mercurochrome or tattoo powder to indicate the surface to be cut. If the specimen is small, it can be secured between Gel-foam sponges, within fine-mesh biopsy bags, or it can be wrapped in tissue paper. The gynecolo-gist may also submit the biopsy oriented mucosal side up on a mounting surface such as filter paper. In this case, instruct your histotechnologist to embed and cut the biopsy specimen perpendic-ular to the mounting surface. All biopsy speci-mens should be entirely submitted, and it is often useful to routinely request that multiple levels be examined by the histology laboratory.

Endometrial biopsies should be handled simi-larly to curettage specimens.

Endocervical and endometrial curettings consist of multiple small fragments of epithelium, which are often admixed with blood and mucus. The surgeon may put the curettings on Telfa pads or directly into fixative. Scrape the Telfa pad care-fully on both sides, and filter the fluid of the speci-men container into a tissue bag to obtain all tissue fragments. Record the aggregate dimension, and note the percentage of tissue versus the percent-age of blood and mucus. The entire specimen should be submitted either wrapped in tissue paper or within a fine-mesh biopsy bag. Even if no tissue is visible, the blood and mucus should still be submitted for histologic evalua-tion, as they may contain entrapped small epithe-lial fragments. Multiple levels are often useful in evaluating these specimens. For endometrial specimens, if the tissue obtained is not repre-sentative of functioning endometrium (e.g., endocervix, lower uterine segment, or surface endometrial epithelium only), this fact should be specified. If endometrial cancer is identified, estimate the percentage of the specimen in-volved by tumor.

The loop electrosurgical excision procedure (LEEP) and large loop excision of the transforma-tion zone (LLETZ) are electrocautery excisions of the cervical transformation zone that excise less tissue than the traditional cone biopsy. Their use is increasing in the treatment of squamous intraepithelial lesions. Depending on the type of loop used and on the depth of the excision, the specimen may be large enough to allow one to orient, open, and process it like a conventional cone biopsy, as described later.

However, many of these specimens arrive in the surgical pathol-ogy laboratory already fixed in formalin and/or in several pieces. The endocervical margin will sometimes be submitted separately, and an overall orientation may or may not be provided. If multiple fragments are submitted, identify the mucosal surface, and try to distinguish the smooth, gray squamous mucosa from the ru-gated, mucoid, tan endocervical mucosa. Divide the fragments into strips with sections perpen-dicular to the squamocolumnar junction. For shallow, saucer-shaped specimens, divide the specimen radially as illustrated. This is similar to slicing a pie. For small conical specimens that are already well fixed, divide the specimen into anterior and posterior halves, and section each half longitudinally as shown. Conceptually, cut-ting the biopsy this way is similar to the handling of the perpendicular sections of the distal urethral margins in a radical prostatectomy specimen. Note that in contrast to large cone biopsies, not all sections will demonstrate the cervical canal mucosa. Although cautery artifact may make the limits of resection of these specimens difficult to evaluate, it is always best to ink the mucosal margins and exposed stroma for histologic evaluation.

A cervical cone biopsy is a conical excision of the cervical canal performed with either a laser or a surgical blade (cold knife excision). The wider part of the cone is the outer ectocervix, and the tapered end is the endocervical margin. Mea-sure the length of the cone biopsy corresponding to the endocervical canal, the diameter at the ectocervical margin, and the diameter at the en-docervical margin. By convention, the ectocervix is described as a clock face with the most superior midpoint of the anterior lip designated as 12 o’clock. This point is usually marked with a stitch by the gynecologist. After orienting the cone biopsy as if viewed in situ, ink the exposed fibrous stroma and the ectocervical mucosal margin. Use a different color to ink the endocervical mucosal margin. Make a longitudinal incision through the outer stroma to the inner canal at the 3-o’clock position, and open the specimen so that the inner mucosal surface is exposed. The convention of incising the cervix at either 3 or 9 o’clock is based on the fact that most cervical lesions arise on the anterior and posterior surfaces, rather than laterally. Pin the specimen to either a wax or cork board with the epithelial surface upward, using pins placed through the stroma on both sides. Examine the mucosal surface, and look for any lesions, especially along the squamocolumnar junction. 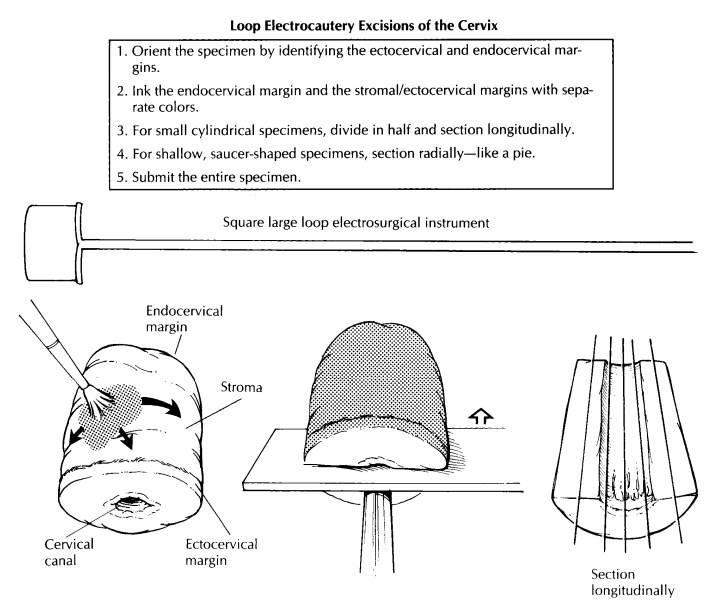 After fixation, cut serial full-thickness sections perpendicular to the mucosal surface in the plane of the endocervical canal. Use the endocervical apex as a pivot, and angle the cuts to provide a continuous line from the endocervical mucosa to the ectocervical mucosa. These cuts will en-compass the squamocolumnar junction and will demonstrate the extent of the transformation zone. The sections should be 0.2 to 0.3 cm wide and will end up being slightly wedge-shaped. All sections should be submitted sequentially and designated as to their clock-face orientation. As with other biopsies, multiple levels are often routinely requested.

·  What grade of squamous intraepithelial lesion is identified?

·  Is adenocarcinoma in situ present?

·  Is the lesion focal, multifocal, or extensive? State the percentage or quadrants of tissue involved.

·  If no precursor lesion or invasive tumor is iden-tified, what is the adequacy of the specimen (i.e., state the presence or absence of the squamoco-lumnar junction)?