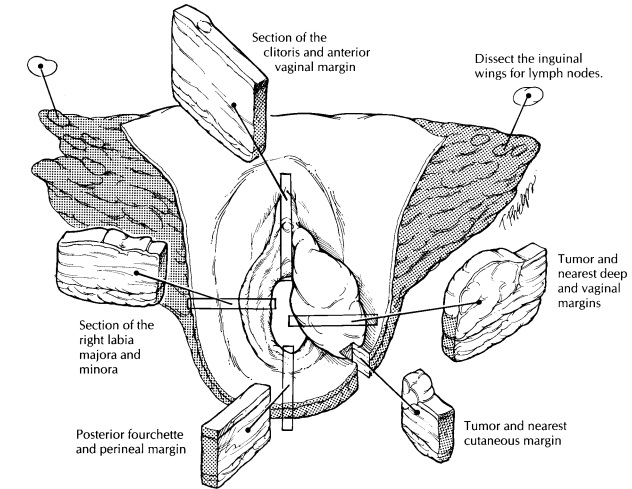 The vulva collectively refers to the external female genitalia. It includes the mons pubis, labia majora and minora, clitoris, vestibule with the urethral and vaginal orifices, posterior fourchette and per-ineum.

The vulva collectively refers to the external female genitalia. It includes the mons pubis, labia majora and minora, clitoris, vestibule with the urethral and vaginal orifices, posterior fourchette and per-ineum. The epithelial covering is predominantly skin (keratinized, stratified squamous epithe-lium), except for the vestibule, which is mucosa (nonkeratinized). Vulvar diseases are primarily epithelial in origin and usually can be seen exter-nally. Therefore, most vulvar specimens can be handled in a manner similar to other skin speci-mens with emphasis on proper orientation and an evaluation of surgical margins. 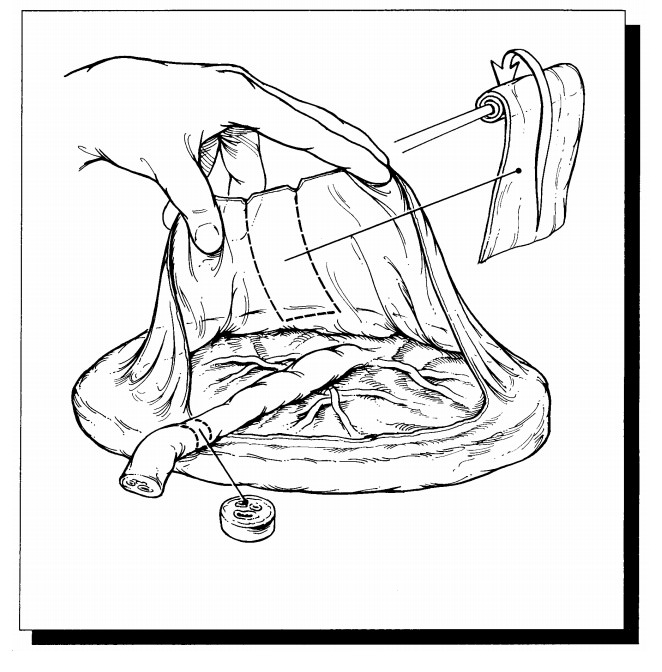 Diagnostic punch biopsies are usually performed for lesions that appear as unusual discolorations or thickenings of the vulva. The most important tasks are to orient the specimen so that sections will be taken perpendicular to the epithelial sur-face and to secure the specimen properly so that small pieces are not lost in processing. When mul-tiple sites have been biopsied to map out the extent of a lesion, be sure to clearly designate each separate location in the diagnosis.

neoplasia (VIN). This technique simultaneously disrupts tissue by ultrasound and aspirates tissue. Numerous small fragments of epithelium with little or no underlying stroma are generated. Due to the size and quantity of the fragments, orientation of the epithelial surface is not possi-ble. The best approach is to handle these tissues like a curettage specimen. First, collect all the tissue fragments by pouring the contents of the specimen container through a filter. Next, submit the tissue as an aggregate either within a fine-mesh biopsy bag or wrapped in tissue paper. Multiple levels can then be ordered on each tissue block to assist with the three-dimensional orien-tation of the lesion. 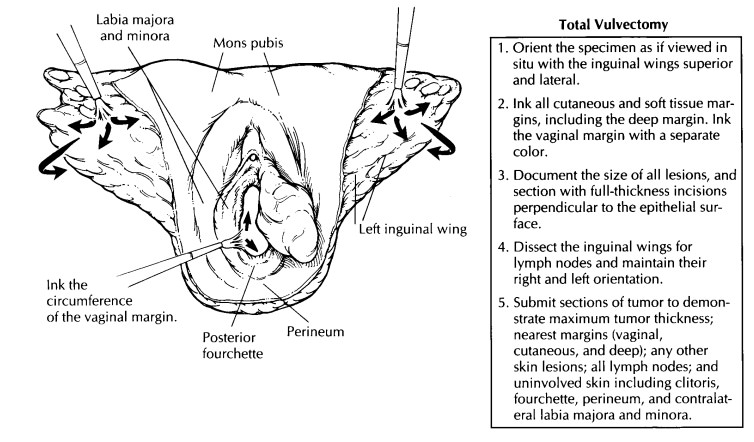 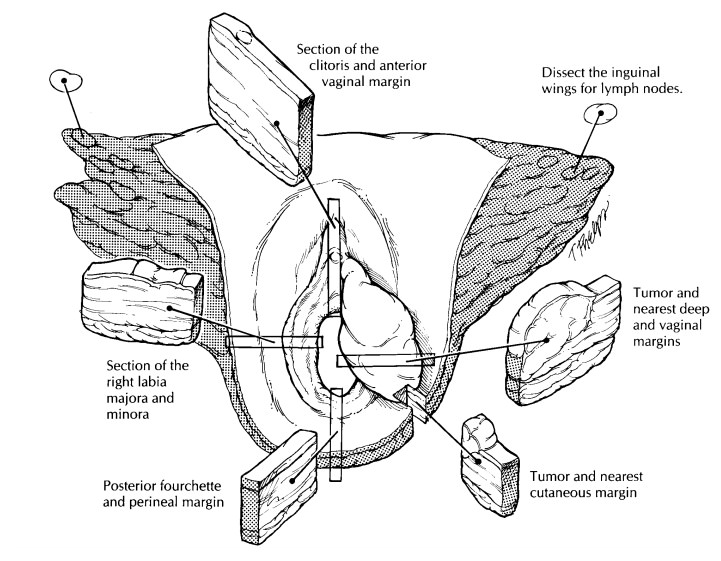 Excisional biopsies of the vulva range from simple excisions of inclusion cysts to wide local excisions of premalignant lesions or minimally invasive cancers. The tissue submitted usually consists of an ellipse of skin with a variable amount of underlying soft tissue, and it often lacks any identifiable anatomic landmarks. Look for a stitch or diagram provided by the gynecolo-gist for orientation. It is crucial not to proceed with the dissection until you understand the insitu configuration of the specimen. These speci-mens can be handled in the same way as other excisional biopsies of skin. Ink all the margins (both cutaneous and deep) and take sections perpendicular to the epithelial sur-face. The separate cutaneous margins should be clearly designated. Be prepared to submit the entire specimen in order to rule out or confirm invasive disease and to document the adequacy of the resection margins.

The majority of vulvectomies are performed for the treatment of invasive squamous carcinoma. Most squamous carcinomas arise on the labia (usually the labia majora), with the remainder primarily located on either the clitoris or poste-rior fourchette. Vulvectomy specimens can be either partial—when only a portion of the vulva is removed—or total—when the whole vulvar region is removed. A portion of the vagina and extensions of perineum around the anus may also be included. The depth of the resection is variable. A superficial vulvectomy refers to removal of the epidermis with a variable amount of dermis and subcutaneous tissue. A deep vulvectomy refers to removal of the vulva to the superficial aponeu-rosis of the urogenital diaphragm and/or pubic periosteum. Inguinal node dissections can either be attached to the vulvectomy specimen as su-perolateral wings or submitted separately.

The initial evaluation includes orientation and documentation of the tissues received. Begin by orienting the specimen as if viewed in situ. With a total vulvectomy, this is easily accomplished by placing the inguinal fat superiorly and laterally. If the inguinal region is not present, use the clitoris to define the superior and midline position. In partial vulvectomies, orient the specimen using the hair-bearing labia majora, which represents the lateral extent of the resection. If there is any doubt, ask the surgeon to help with orientation. Document the type of specimen received and the anatomic structures present. Measure the width of the specimen, the length from the superior to inferior limits, and the depth from the epithelial surface to the deep soft tissue margin. It may be helpful to have photographs, line drawings, or preprinted diagrams to demonstrate the margins of resec-tion and extent of the lesion. Ink all the exposed epithelial and soft tissue margins. The vaginal margin should be painted with a different color ink than the other cutaneous margins. The speci-men can then be pinned to a cork or wax board for fixation.

After fixation, examine the epithelial surface for ulcerative, exophytic, and flat lesions. Evaluate all lesions with full-thickness incisions perpen-dicular to the epithelial surface. Record their loca-tion, size, and distance to the nearest skin and va-ginal margins. For invasive tumors, also measure the maximal tumor thickness and the distance from the deepest tumor edge to the nearest deep margin. Submit sections of the tumor in such a way as to include the nearest deep and epithelial (both vaginal and cutaneous) margins as well as adjacent normal-appearing skin. Preneoplastic lesions such as vulvar intraepithelial neoplasia (VIN) may be found adjacent to tumors. Margins should be evaluated with sections that are per-pendicular rather than parallel to the surgical margin. Representative epithelial margins distant to the tumor do not need to be submitted. Judi-ciously sample any other skin lesions, especially those within 0.5 cm of any margin. Include sec-tions of non-neoplastic skin so that it can be evaluated for the presence of lichen sclerosus, squamous hyperplasia, and condylomata.

In vulvectomy specimens with attached ingui-nal regions, the lymph nodes can be dissected either before or after obtaining the appropriate epithelial sections. Turn the specimen over so that the epithelial surface is face down and the subcutaneous tissue is exposed. Beginning at the superior tip of one inguinal wing, and prog-ressing medially, make parallel 0.3- to 0.4-cm-wide sections through the fatty tissue. Examine the cut fat carefully for lymph nodes. Although the lymphatic drainage of the vulva can be di-vided into superficial and deep node groups, this is usually not necessary and important nodes, such as Cloquet’s node, must be separately desig-nated by the surgeon. All the lymph nodes should be entirely submitted unless grossly positive, in which case a representative section will suffice. Be sure to clearly designate and submit the right and left inguinal node groups separately. Lymph nodes may also be received as separate specimens designated by the surgeon. State the location (inguinal-femoral or pelvic); specify right side, left side, or both; and submit all lymph nodes in their entirety.

Important Issues to Address in Your Surgical Pathology Report on Vulvectomies

·  What type of vulvectomy was performed (par-tial vs. total, superficial vs. deep), and what structures are present?

·  Where is the tumor located? Is it unifocal or multifocal?

·  What is the size of the tumor (in centimeters; 2 cm is a cutoff point for TNM staging)?

·  What are the histologic type and grade of the neoplasm?

·  What is the ‘‘maximum tumor thickness’’ (in millimeters)? (Measure from the granular layer if keratinized or surface if nonkeratin-ized.)

·  What is the ‘‘maximum depth of invasion’’ (in millimeters)? (For carcinomas, measure from the epithelial stromal junction of the adjacent most superficial dermal papillae. For melano-mas, measure from the deep border of the gran-ular layer.) Does the tumor involve any of the margins? (vaginal, cutaneous, or deep)? Give the dis- tance of the tumor from closest margin (in cen-timeters).

·  Is there evidence of lymphatic, vascular, or perineural invasion?

·  Does the adjacent skin show any precancerous lesions (VIN or dysplastic nevi)?

·  Does the tumor involve any lymph nodes? (In-clude the location, number of nodes involved, and the number of nodes examined separately for each site. Also, note the presence or absence of extranodal extension.)

·  Does the non-neoplastic portion of the vulva show any pathology (e.g., squamous hyper-plasia, lichen sclerosus, condyloma acumina-tum, or other)?