Thoracic surgery presents a unique set of physiological problems for the anesthesiologist.

Thoracic surgery presents a unique set of physiologi-cal problems for the anesthesiologist. These include physiological derangements caused by placing the patient in the lateral decubitus position, opening the chest (open pneumothorax), and the need for one-lung ventilation.

The lateral decubitus position provides optimal access for most operations on the lungs, pleura, esophagus, the great vessels, other mediastinal structures, and vertebrae. Unfortunately, this posi-tion may significantly alter the normal pulmonary ventilation/perfusion relationships. These derange-ments are further accentuated by induction of anesthesia, initiation of mechanical ventilation, neu-romuscular blockade, opening the chest, and surgical retraction. Although perfusion continues to favor the dependent (lower) lung, ventilation progressively favors the less perfused upper lung. The resulting mismatch increases the risk of hypoxemia.

When a supine patient assumes the lateral decu-bitus position, ventilation/perfusion matching is preserved during spontaneous ventilation. The dependent (lower) lung receives more perfusion than does the upper lung due to gravitational influ-ences on blood flow distribution in the pulmonary circulation. The dependent lung also receives more ventilation because: (1) contraction of the depen-dent hemidiaphragm is more efficient compared with the nondependent [upper] hemidiaphragm and (2) the dependent lung is on a more favorable part of the compliance curve ( Figure25–1). 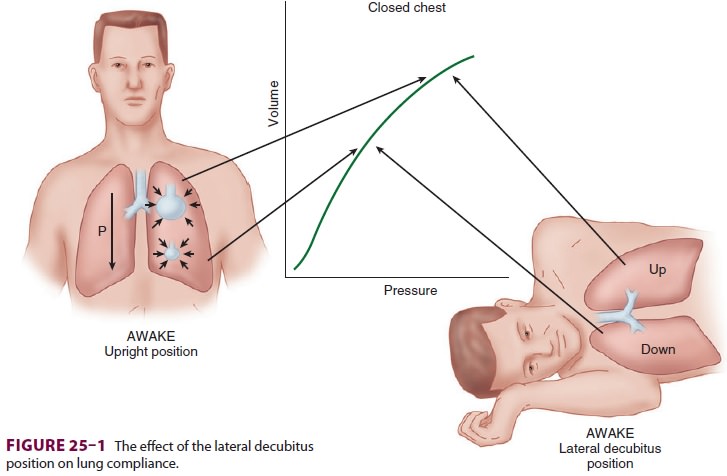 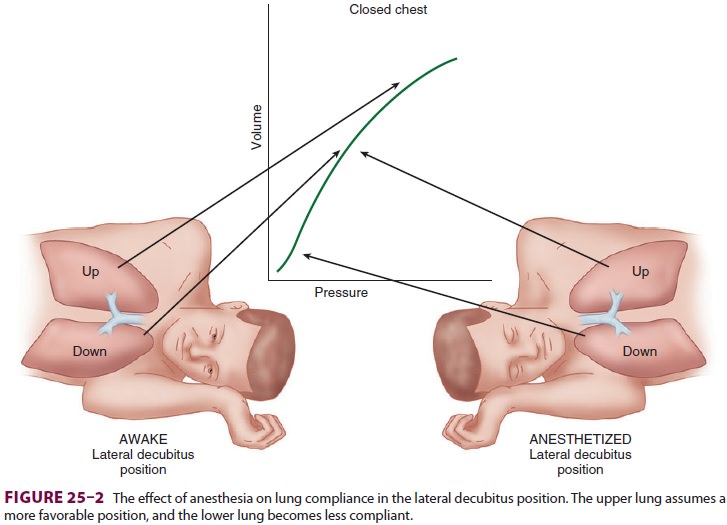 curve, but moves the lower lung to a less favorable-position (Figure25–2). As a result, the upper lung is ventilated more than the dependent lower lung; ven-tilation/perfusion mismatching occurs because the dependent lung continues to have greater perfusion.

Controlled positive-pressure ventilation favors the upper lung in the lateral position because it is more compliant than the lower lung. Neuromuscular blockade enhances this effect by allowing the abdominal contents to rise up further against the dependent hemidiaphragm and impede ventila-tion of the lower lung. Using a rigid “bean bag” to maintain the patient in the lateral decubitus position further restricts movement of the dependent hemi-thorax. Finally, opening the nondependent side of the chest further accentuates differences in compli-ance between the two sides because the upper lung is now less restricted in movement. All of these effectsworsen ventilation/perfusion mismatching and pre-dispose the patient to hypoxemia.

The lungs are normally kept expanded by a negative pleural pressure—the net result of the tendency of the lung to collapse and the chest wall to expand. When one side of the chest is opened, the negative pleural pressure is lost, and the elastic recoil of the lung on that side tends to collapse it. Spontaneous ventilation with an open pneumothorax in the lateral position results in paradoxical respirations and mediastinal shift. These two phenomena can cause progressive hypox-emia and hypercapnia, but, fortunately, their effects are overcome by the use of positive-pressure ventila-tion during general anesthesia and thoracotomy.

During spontaneous ventilation in the lateral posi-tion, inspiration causes pleural pressure to become

Intentional collapse of the lung on the operative side facilitates most thoracic procedures, but greatly complicates anesthetic management. Because the collapsed lung continues to be perfused and is delib-erately no longer ventilated, the patient develops a large right-to-left intrapulmonary shunt (20% to 30%). During one-lung ventilation, the mixing of unoxygenated blood from the collapsedupper lung with oxygenated blood from the still-ventilated dependent lung widens the alveolar-to-arterial (A-a) O2 gradient and often results in hypoxemia. Fortunately, blood flow to the nonventi-lated lung is decreased by hypoxic pulmonary vaso-constriction (HPV) and possibly surgical compression of the upper lung

high mean airway pressures in the ventilated lung due to high positive end-expiratory pressure (PEEP), hyperventilation, or high peak inspiratory pressures;a low Fio2, which produces hypoxic pulmonary vasoconstriction in the ventilated lung; (3) vasocon-strictors that may have a greater effect on normoxic vessels than hypoxic ones; and (4) intrinsic PEEP that develops due to inadequate expiratory times.Elimination of CO2 is usually unchanged by one-lung ventilation, provided that minute ventila-tion is unchanged and that preexisting CO 2 retention was not present while ventilating both lungs; arterial CO2 tension is usually not appreciably altered.