Lung transplantation is indicated for end-stage pul-monary parenchymal disease or pulmonary hyper-tension. Candidates are functionally incapacitated by dyspnea and have a poor prognosis. Criteria vary according to the primary disease process. Common etiologies are listed in Table25–3. Lung transplan-tation (as is true for all solid organ transplants) is limited by the availability of suitable organs, not by the availability of recipients. Patients typically have dyspnea at rest or with minimal activity and resting 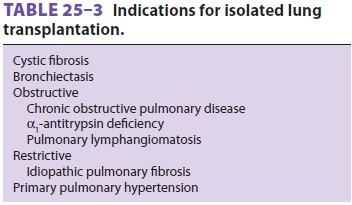 Effective coordination between the organ-retrieval team and the transplant team minimizes graft isch-emia time and avoids unnecessary prolongation of pretransplant anesthesia time. These procedures are performed on an emergency basis; therefore, patients may have little time to fast for surgery. Oral cyclosporine also may be given preoperatively. Administration of a clear antacid, an H2 blocker, or metoclopramide should be considered. Patients are very sensitive to sedatives, so premedication is usu-ally administered only in the operating room when the patient is directly attended. Immunosuppressants and antibiotics are also administered after induction and prior to surgical incision.

Strict asepsis should be observed for invasive moni-toring procedures. Central venous access might be accomplished only after induction of anesthesia because patients may not be able to lie flat while awake. Patients with a patent foramen ovale are at risk of paradoxical embolism because of high right atrial pressures.

A rapid-sequence induction is utilized. Induction with ketamine, etomidate, an opioid, or a combina-tion of these agents is employed, avoiding precipi-tous drops in blood pressure. An NMB is used to facilitate laryngoscopy. Hypoxemia and hypercar-bia must be avoided to prevent further increases in pulmonary artery pressure. Hypotension should be treated with vasopressors instead of large fluid boluses .

Anesthesia is usually maintained with total intravenous anesthesia or a volatile agent. Intra-operative difficulties in ventilation are not uncom-mon. Progressive retention of CO2 can also be a problem intraoperatively. Ventilation should be adjusted to maintain a Paco2 as close to the patient’s baseline as possible. However, in the presence of a reasonable cardiovascular reserve and normal right heart function, higher levels of Paco2 can be toler-ated for short periods of time. Hypercarbia and aci-dosis may lead to pulmonary vasoconstriction and acute right heart failure, and hemodynamic support with inotropes may be required for these patients. Patients with cystic fibrosis have copious secretions and require frequent suctioning.

Single-lung transplantation is often attempted without CPB. The procedure is performed through a posterior thoracotomy. Whether to employ CPB during transplantation of one lung is based on the patient’s response to collapsing the lung to be replaced and clamping its pulmonary artery. Persistent arterial hypoxemia (Spo2< 88%) or a sudden increase in pulmonary artery pres-sures necessitates CPB. Prostaglandin E1, mil-rinone, nitroglycerin, and dobutamine may be utilized to reduce pulmonary hypertension and prevent right ventricular failure. Inotropic sup-port may be necessary. After the recipient lung is removed, the pulmonary artery, left atrial cuff (with the pulmonary veins), and bronchus of the donor lung are anastomosed. Flexible bronchos-copy is used to examine the bronchial suture line after its completion.

After anastomosis of the donor organ or organs, ventilation to both lungs is resumed. Following transplantation, peak inspiratory pressuresshould be maintained at the minimum pressure compatible with good lung expansion, and the inspired oxygen concentration should be maintained as close to room air as allowed by a Pao2>60 mm Hg. Methylprednisolone and mannitol are usually administered prior to the release of vascular clamps. Hyperkalemia may occur as the preservative fluid is washed out of the donor organ. If transplantation has been performed on CPB, the patient is separated from CPB. Pulmonary vasodilators, inhaled nitric oxide, and inotropes (above) may be necessary. Transesophageal echocardiography is helpful in dif-ferentiating right and left ventricular dysfunction, as well as in evaluating blood flow in the pulmonary vessels, particularly after transplantation.

Transplantation disrupts the neural innerva-tion, lymphatic drainage, and bronchial circulation of the transplanted lung. The respiratory pattern is unaffected, but the cough reflex is abolished below the carina. Bronchial hyperreactivity is observed in some patients. Hypoxic pulmonary vasoconstriction remains normal. Loss of lymphatic drainage increases extravascular lung water and predisposes the trans-planted lung to pulmonary edema. Intraoperative fluid replacement must therefore be kept to a mini-mum. Loss of the bronchial circulation predisposes to ischemic breakdown of the bronchial suture line.

Patients are extubated after surgery as soon as is feasible. A thoracic epidural catheter may be employed for postoperative analgesia when coagu-lation studies are normal. The postoperative course may be complicated by acute rejection, infections, and renal and hepatic dysfunction. Deteriorating lung function may result from rejection or reperfu-sion injury. Occasionally, temporary extracorporeal membrane oxygenation may be necessary. Frequent bronchoscopy with transbronchial biopsies and lavage are necessary to differentiate between rejec-tion and infection. Nosocomial Gram-negative bac-teria, cytomegalovirus, Candida, Aspergillus, and Pneumocystis carinii are common pathogens. Otherpostoperative surgical complications include dam-age to the phrenic, vagus, and left recurrent laryn-geal nerves.