Chelating agents are drugs used to prevent or reverse the toxic effects of a heavy metal on an enzyme or other cellular target, or to accelerate the elimination of the metal from the body.

Chelating agents are drugs used to prevent or reverse the toxic effects of a heavy metal on an enzyme or other cellular target, or to accelerate the elimination of the metal from the body. By form-ing a complex with the heavy metal, the chelating agent renders the metal unavailable for toxic interactions with functional groups of enzymes or other proteins, coenzymes, cellular nucleophiles, and membranes. Chelating agents contain one or more coordinat-ing atoms, usually oxygen, sulfur, or nitrogen, which donate a pair of electrons to a cationic metal ion to form one or more coordi-nate-covalent bonds. Depending on the number of metal-ligand bonds, the complex may be referred to as mono-, bi-, or polyden-tate. Figure 57–2 depicts the hexadentate chelate formed by inter-action of edetate (ethylenediaminetetraacetate) with a metal atom, such as lead. 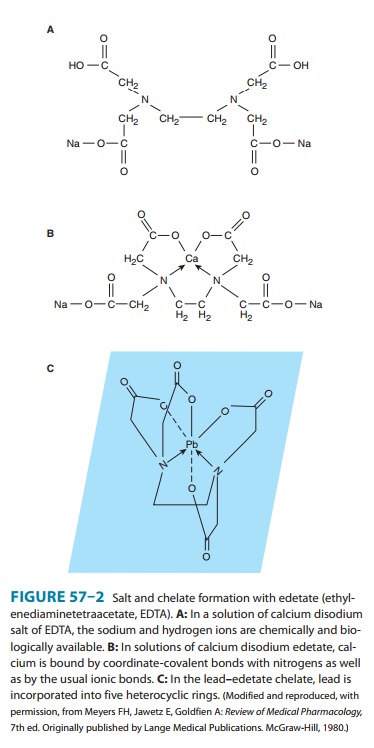 In some cases, the metal-mobilizing effect of a therapeutic chelating agent may not only enhance that metal’s excretion—a desired effect—but may also redistribute some of the metal to other vital organs. This has been demonstrated for dimercaprol, which redistributes mercury and arsenic to the brain while also enhancing urinary mercury and arsenic excretion. Although several chelating agents have the capacity to mobilize cadmium, their tendency to redistribute cadmium to the kidney and increase nephrotoxicity has negated their therapeutic value in cadmium intoxication.

In addition to removing the target metal that is exerting toxic effects on the body, some chelating agents may enhance excretion of essential cations, such as zinc in the case of calcium EDTA and diethylenetriaminepentaacetic acid (DTPA), and zinc and copper in the case of succimer. No clinical significance of this effect has been demonstrated, although some animal data suggest the possibility of adverse developmental impact. If prolonged chelation during the prenatal period or early childhood period is necessary, judicious supplementation of the diet with zinc might be considered.

The longer the half-life of a metal in a particular organ, the less effectively it will be removed by chelation. For example, in the case of lead chelation with calcium EDTA or succimer, or of pluto-nium chelation with DTPA, the metal is more effectively removed from soft tissues than from bone, where incorporation into bone matrix results in prolonged retention.

In most cases, the capacity of chelating agents to prevent or reduce the adverse effects of toxic metals appears to be greatest when such agents are administered very soon after an acute metal exposure. Use of chelating agents days to weeks after an acute metal exposure ends—or their use in the treatment of chronic metal intoxication—may still be associated with increased metal excretion. However, at that point, the capacity of such enhanced excretion to mitigate the pathologic effect of the metal exposure may be reduced.