Dimercaprol (Figure 57–3), an oily, colorless liquid with a strong mercaptan-like odor, was developed in Great Britain during World War II as a therapeutic antidote against poisoning by the arsenic-containing warfare agent lewisite.

Dimercaprol (Figure 57–3), an oily, colorless liquid with a strong mercaptan-like odor, was developed in Great Britain during World War II as a therapeutic antidote against poisoning by the arsenic-containing warfare agent lewisite. 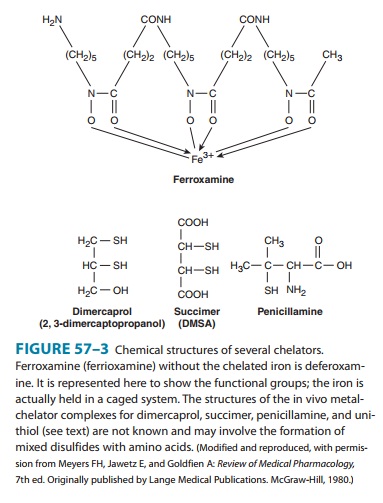 It thus became known as British anti-Lewisite, or BAL. Because aqueous solutions of di-mercaprol are unstable and oxidize readily, it is dispensed in 10% solution in peanut oil and must be administered by intra-muscular injection, which is often painful.

In animal models, dimercaprol prevents and reverses arsenic-induced inhibition of sulfhydryl-containing enzymes and, if given soon after exposure, may protect against the lethal effects of inor-ganic and organic arsenicals. Human data indicate that it can increase the rate of excretion of arsenic and lead and may offer therapeutic benefit in the treatment of acute intoxication by arse-nic, lead, and mercury.

Dimercaprol is FDA-approved as single-agent treatment of acute poisoning by arsenic and inorganic mercury and for the treatment of severe lead poisoning when used in conjunction with edetate calcium disodium (EDTA; ). Although studies of its metabolism in humans are limited, intramuscularly administered dimercaprol appears to be readily absorbed, metabolized, and excreted by the kidney within 4–8 hours. Animal models indicate that it may also undergo biliary excretion, but the role of this excretory route in humans and other details of its biotransforma-tion are uncertain.

When used in therapeutic doses, dimercaprol is associated with a high incidence of adverse effects, including hypertension, tachy-cardia, nausea, vomiting, lacrimation, salivation, fever (particu-larly in children), and pain at the injection site. Its use has also been associated with thrombocytopenia and increased prothrom-bin time—factors that may limit intramuscular injection because of the risk of hematoma formation at the injection site. Despite its protective effects in acutely intoxicated animals, dimercaprol may redistribute arsenic and mercury to the central nervous system, and it is not advocated for treatment of chronic poisoning. Water-soluble analogs of dimercaprol—unithiol and succimer—have higher therapeutic indices and have replaced dimercaprol in many settings.