1. Acute—Acute inorganic lead poisoning is uncommon today. Itusually results from industrial inhalation of large quantities of lead oxide fumes or, in small children, from ingestion of a large oral dose of lead in the form of lead-based paint chips; small objects, eg, toys coated or fabricated from lead; or contaminated food or drink. The onset of severe symptoms usually requires several days or weeks of recurrent exposure and manifests as signs and symptoms of encephalopathy or colic. Evidence of hemolytic anemia (or ane-mia with basophilic stippling if exposure has been subacute) and elevated hepatic aminotransferases may be present.

The diagnosis of acute inorganic lead poisoning may be diffi-cult, and depending on the presenting symptoms, the condition has sometimes been mistaken for appendicitis, peptic ulcer, biliary colic, pancreatitis, or infectious meningitis. Subacute presenta-tion, featuring headache, fatigue, intermittent abdominal cramps, myalgias, and arthralgias, has often been mistaken for a flu-like viral illness. When there has been recent ingestion of lead-contain-ing paint chips, glazes, or weights, radiopacities may be visible on abdominal radiographs. 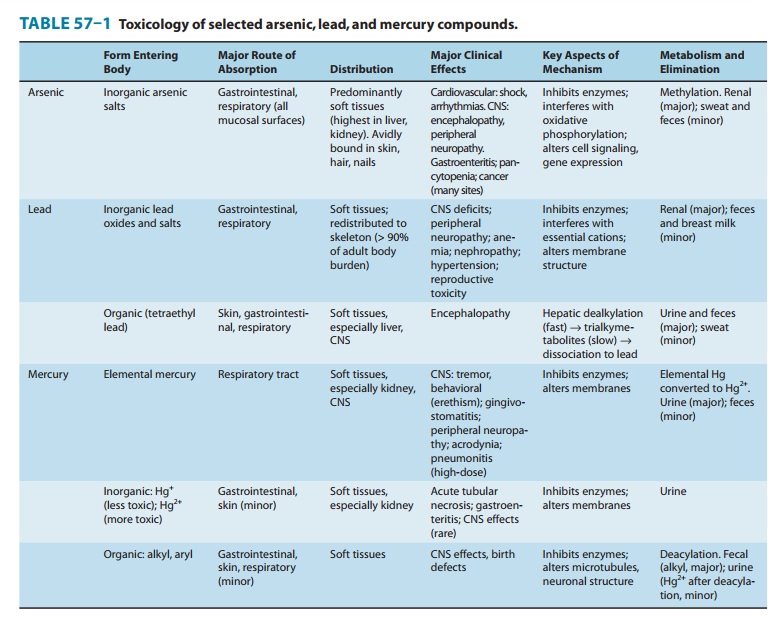 2. Chronic—The patient with chronic lead intoxication usuallypresents with multisystemic findings, including complaints of anorexia, fatigue, and malaise; neurologic complaints, including headache, difficulty in concentrating, and irritability or depressed mood; weakness, arthralgias, or myalgias; and gastrointestinal symptoms. Lead poisoning should be strongly suspected in any patient presenting with headache, abdominal pain, and anemia; and less commonly with motor neuropathy, gout, and renal insuf-ficiency. Chronic lead intoxication should be considered in any child with neurocognitive deficits, growth retardation, or develop-mental delay. It is important to recognize that adverse effects of lead that are of considerable public health significance, such as subclinical decrements in neurodevelopment in children and hypertension in adults, are usually nonspecific and may not come to medical attention.

The diagnosis of lead intoxication is best confirmed by measur-ing lead in whole blood. Although this test reflects lead currently circulating in blood and soft tissues and is not a reliable marker of either recent or cumulative lead exposure, most patients with lead-related disease have blood lead concentrations higher than the normal range. Average background blood lead concentrations in North America and Europe have declined by 90% in recent decades, and the geometric mean blood lead concentration in the United States in 2005–2006 was estimated to be 1.29 mcg/dL. Though predominantly a research tool, the concentration of lead in bone assessed by noninvasive K X-ray fluorescence measurement of lead has been correlated with long-term cumulative lead expo-sure, and its relationship to numerous lead-related disorders is asubject of ongoing investigation. Measurement of lead excretion in the urine after a single dose of a chelating agent (sometimes called a “chelation challenge test”) primarily reflects the lead content of soft tissues and may not be a reliable marker of long-term lead exposure, remote past exposure, or skeletal lead burden. Because of the lag time associated with lead-induced elevations in circulating heme precursors, the finding of a blood lead concentration of 30 mcg/dL or more with no concurrent increase in zinc protopor-phyrin suggests that the lead exposure was of recent onset.

Poisoning from organolead compounds is now very rare, in large part because of the worldwide phase-out of tetraethyl and tetra-methyl lead as antiknock additives in gasoline. However, organo-lead compounds such as lead stearate or lead naphthenate are still used in certain commercial processes. Because of their volatility or lipid solubility, organolead compounds tend to be well absorbed through either the respiratory tract or the skin. Organolead com-pounds predominantly target the central nervous system, producing dose-dependent effects that may include neurocognitive deficits, insomnia, delirium, hallucinations, tremor, convulsions, and death.