1. Occurrence of Petroleum 2. Refining of crude petroleum 3. Uses of Petroleum - The term ‘petroleum’ is derived from the latin words ‘petra’ meaning rock and ‘oleum’ meaning oil. It is a fossil fuel formed from the remains of ancient marine organisms through decaying process.

The term ‘petroleum’ is derived from the latin words ‘petra’ meaning rock and ‘oleum’ meaning oil. It is a fossil fuel formed from the remains of ancient marine organisms through decaying process. Petroleum is a complex mixture of hydrocarbons that occur in Earth in liquid, gaseous, or solid form. The term petroleum commonly denotes the liquid form, crude oil. But technically petroleum also includes natural gas and bitumen, a solid form. The natural gas and the crude oil constitute the primary fossil fuels. 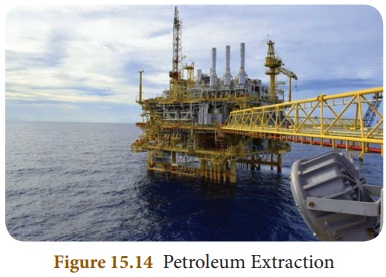 People in ancient cultures used crude oil for binding materials. It was also used as a sealant for water proofing various surfaces. 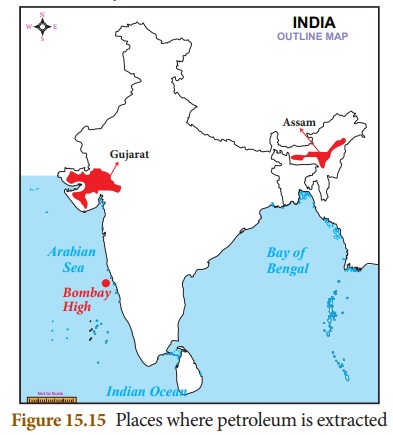 By drilling through the earth the crude oil is pumped out from the well as a black liquid.

The crude petroleum obtained from the well is a dark colored viscous liquid which contains many impurities such as water, solid particles and gases like methane and ethane. To make it useful for different purposes, it must be separated into various components. The process of separating petroleum into useful by-products and removal of undesirable impurities is called refining. The steps involved in this process are given below. 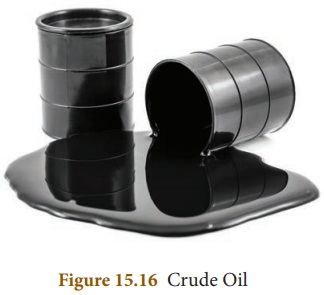 The crude oil obtained from the oil wells will have salt water mixed with it. As the first step the water is removed from the crude oil.

The crude oil will have harmful sulphur compounds as impurities. In this step these impurities are removed.

Petroleum is a mixture of various constituents such as petroleum gas, petrol, diesel, kerosene, lubricating oil, paraffin wax, etc. The process of separation of various constituents or fractions of petroleum is done by fractional distillation in fractionating columns. The process of heating a mixture of liquids having different boiling points and then separating them by cooling is called fractional distillation.

Crude petroleum is first heated to about 400°C in a furnace. As the vapours of crude oil move up the tower, the various fractions condense according to their boiling point ranges. The various fractions of petroleum obtained are given in Figure 15. 17. Many useful substances are obtained from petroleum and natural gas. These are termed as ‘petrochemicals’. These are used in the manufacture of detergents, fibres, and other man-made plastics like polythene. Hydrogen gas obtained from natural gas, is used in the production of fertilizers. Due to its great commercial importance, pertoleum is also called ‘black gold’.

Products obtained from crude oil have a number of uses.

* Liquefied Petroleum Gas or LPG is used in houses as well as in the industry.

* Diesel and petrol are used as fuels for vehicles. It is also used to run electric generators.

* Petrol is used as a solvent for dry cleaning.

* Kerosene is used as a fuel for stoves and also in jet planes.

* Lubricating oil reduces wear and tear and corrosion of machines.

* Bitumen or asphalt is mainly used to surface roads. 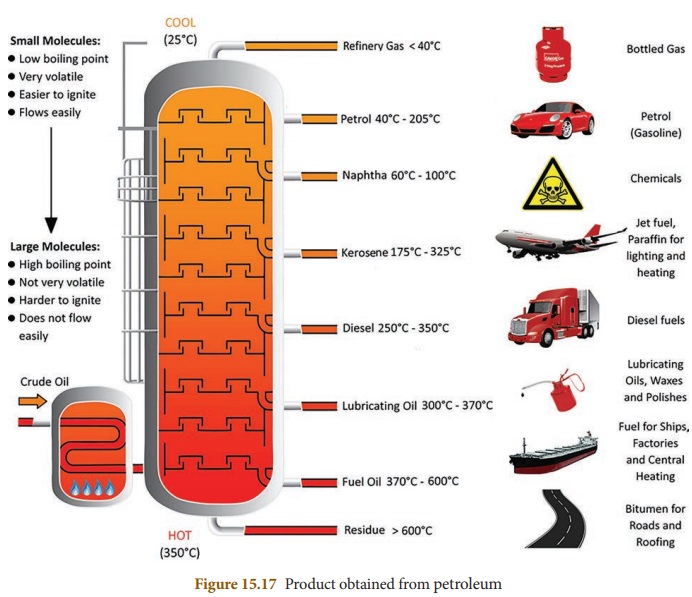 Find out where petroleum is extracted on a large scale in India. Also list out the petroleum refineries in India.