Natural gas is a naturally occurring hydrocarbon gas mixture consisting primarily of methane along with other higher alkanes and a small percentage of carbon dioxide, nitrogen and hydrogen sulphide.

Natural gas is always found above the oil in the oil wells. This gas is trapped inside the small spaces in underground rocks called reservoirs. Conventional natural gas can be extracted through drilling wells. Natural gas can also be found in reservoirs with oil and is extracted along with oil. This is called associated gas.

Natural gas is a fossil fuel used as a source of energy for heating, cooking and electricity generation. Natural gas occurs in Tripura, Rajasthan, Maharashtra, Andhra Pradesh (Krishna, Godavari Basins) and Tamil Nadu (Cauveri Delta) . It is also formed by the decomposition of organic matter in marshy areas and waste sewages. The natural gas formed by this way contains mainly methane. 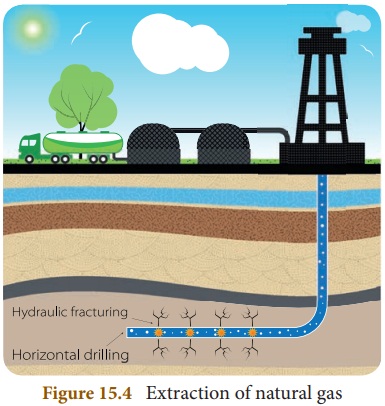 Take a glass bottle and put some leaves, twigs, waste paper and saw-dust in it. Pour some water in it and keep it for 20 days. Open the bottle and bring a glowing splinter near the mouth. You can see a gas burning near the mouth showing its combustible nature. It is due to the evolution of natural gas.

* Natural gas is used as an industrial and domestic fuel.

* It is used in thermal power stations.

* It is used as fuel in vehicles as an alternative for petrol and diesel.

* When heated it decomposes and forms hydrogen and carbon. Hydrogen thus formed is used in the manufacture of fertilizers.

* It is used to manufacture chemicals, fabrics, glass, steel, plastics and paints.

* It is also used in electricity generation. 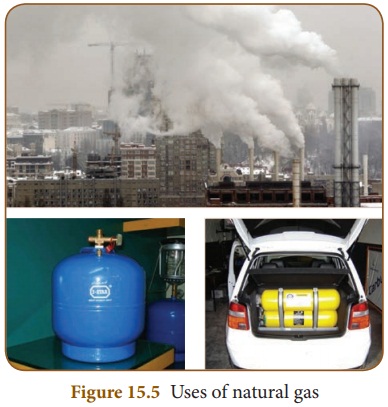 Moderate temperature and humidity is needed to keep paintings and other ancient artifacts from being destroyed byenvironmental factors. Thus natural gas is used in museums to protect the monuments.

* It produces lot of heat as it can be easily burnt.

* It does not leave any residue.

* It burns without smoke and so causes no pollution.

* This can be easily supplied through pipes.

* It can be directly used as fuel in homes and industries.

When the natural gas is compressed at high pressure, it is called Compressed Natural Gas (CNG). Nowadays it is used as fuel in automobiles. The primary hydrocarbon present in CNG is methane (88.5%). Natural gas is liquefied for shipping in large tankers. This is called Liquefied Natural Gas (LNG) . CNG is stored at high pressure whereas LNG is stored in ultra cold liquid form. CNG has the following properties.

* It is the cheapest and cleanest fuel.

* It is less expensive than petrol and diesel.

The average composition of CNG. 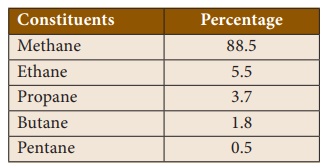