1. Extraction of Coal 2. Types of Coal 3. Uses of Coal 4. Products obtained from coal

Coal is one of the fossil fuels. It is a mixture of free carbon and compounds of carbon containing hydrogen, oxygen, nitrogen and sulphur. Three hundred million years ago, some plants grew into giant ferns and mosses. These plants got buried into the bottom of the soil. They slowly started to decompose and formed a dense, sponge like material called peat. Over time peat was compressed due to high temperature and pressure and coal was formed. As coal contains mainly carbon, the slow process of conversion of dead vegetation into coal is called carbonization.

If the coal beds lie within 22 feet of the earth’s surface, the top soil is removed and coal is dug out. This is called surface mining. 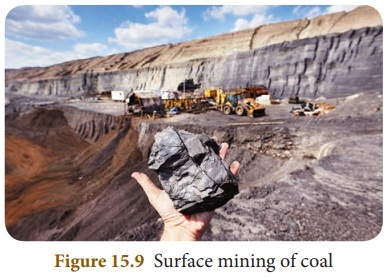 In some places, coal beds are found very deep inside the earth. In that case underground tunnels are made to get this coal. This is called underground mining or deep mining. 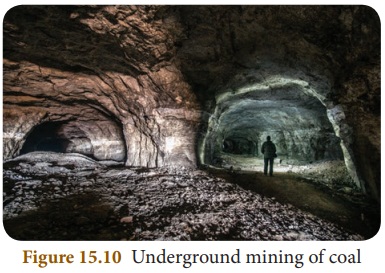 Coal reserves can be found in about 70 countries worldwide. The largest coal reserves are available in United State, Russia, China, Australia and India. The US is the international leader in coal reserves, with nearly 30% of the world’s supply. Coal mining was started in India in 1774. India now ranks third among the coal producing countries in the world. USA and China have two third of the world’s coal reserve.

Coal is classified into four main categories based on the amounts of carbon it contains and the heat energy it can produce. They are lignite, sub bituminous, bituminous and anthracite. Among these four types anthracite is the most desirable one due to its high heat content.

Lignite is a brown colored coal of lowest grade. It has the lowest carbon content. The carbon content of lignite is 25 – 35%. Lignite contains a high amount of water and makes up almost half of our total coal reserves. It is used for electricity generation. The other uses include generating synthetic natural gas and producing fertilizer products.

When lignite becomes darker and harder over time sub-bituminous coal is formed. Sub bituminous coal is a black and dull coal. It has higher heating value than lignite and contains 35-44% carbon. It is used primarily as fuel for electricity power generation. This coal has lower sulphur content than other types and burns cleaner.

With more chemical and physical changes, sub-bituminous coal is developed into bituminous coal. Bituminous coal is dark and hard. It contains 45-86% carbon. It has high heating value. It is used to generate electricity. Other important use of this coal is to provide coke to iron and steel industries. By-products of this coal can be converted into different chemicals which are used to make paint, nylon, and many other items.

Anthracite is the highest grade coal. It has a very light weight and the highest heat content. Anthracite coal is very hard, deep black and shiny. It contains 86-97% carbon and has a heating value slightly higher than bituminous coal. It burns longer with more heat and less dust.

In an outline map of India mark the places where coal mines are found. Also identify the type of coal found in those areas.

* Coal is used to generate heat and electricity.

* It is used to make derivatives of silicon which are used to make lubricants, water repellents, resins, cosmetics, hair shampoos, and toothpaste.

* Activated charcoal is used to make face packs and cosmetics.

* Coal is used to make paper.

* Carbon fibre which is an extremely strong but light weight material is used in construction, mountain bikes, and tennis rackets. 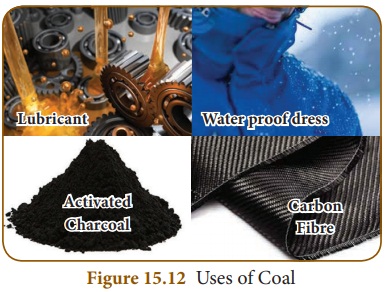 * Activated carbon, used in filters for water and air purification and in kidney dialysis machines is obtained from coal. 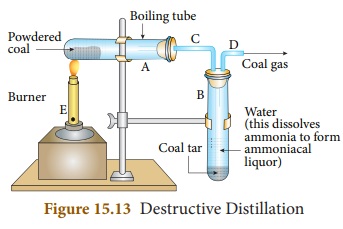 Finely powdered coal is taken in a test tube and heated. At a particular temperature coal breaks down to produce coke, coal tar, ammonia and coal gas. Coal tar is deposited at the bottom of the second test tube and coal gas escapes out through the side tube. Ammonia produced is absorbed in the water, forming ammonium hydroxide. Finally a black residue called coke is left in the tube.

Thousands of different products have coal or coal by-products as their components. Some of them are soap, aspirins (tablet), solvents, dyes, plastics, and fibres, such as rayon and nylon. The main by products obtained during destructive distillation are coke, coal tar, ammonia and coal gas.

Coke contains 98% carbon. It is a porous, black and the purest form of coal. It is a good fuel and burns without smoke. It is largely used as a reducing agent in the extraction of metals from their ores. It is also used in making fuel gases like producer gas and water gas.

Coal tar is a mixture of different carbon compounds. It is a thick, black liquid with unpleasant smell. The fractional distillation of coal tar gives many chemical substances like benzene, toluene, phenol and aniline. They are used in the preparation of dyes, explosives, paints, synthetics fibers, drugs, and pesticides. Another product obtained from coal tar is naphthalene balls which are used to repel moth and other insects.

Coal gas also known as town gas is mainly a mixture of gases like hydrogen, methane and carbon monoxide. The gases present in coal gas are combustible and hence, it is an excellent fuel. It has high calorific value.

The other by product obtained from coal is ammonia. It is used for making fertilizers such as ammonium sulphate, ammonium superphosphate etc.

It is also known as Black Diamond owing to its precious nature. On destructive distillation, 1000 kg of coal gives 700 kg of coke, 100 litres of ammonia, 50 litres of coaltar and 400 m3 of coal gas.