Other Uses of Affine Transforms

Other Uses of Affine Transforms

So far we have focused on the architecture of shared memory machines, but the theory of affine loop transforms has many other applications. We can ap-ply affine transforms to other forms of parallelism including distributed memory

machines, vector instructions, SIMD (Single Instruction Multiple Data) instruc-tions, as well as multiple-instruction-issue machines. The reuse analysis intro-duced in this chapter also is useful for data prefetching, which is an effective technique for improving memory performance.

For distributed memory machines, where processors communicate by sending messages to each other, it is even more important that processors be assigned large, independent units of computation, such as those generated by the affine-partitioning algorithm. Besides computation partitioning, a number of addi-tional compilation issues remain:

1.          Data allocation. If processors use different portions of an array, they each only have to allocate enough space to hold the portion used. We can use projection to determine the section of arrays used by each processor. The input is the system of linear inequalities representing the loop bounds, the

array access functions, and the affine partitions that map the iterations to processor IDs. We project away the loop indices and find for each processor ID the set of array locations used.

2. Communication code. We need to generate explicit code to send and receive data to and from other processors. At each synchronization point

Again, if all accesses are affine, these tasks can be performed by the compiler, using the affine framework.

3. Optimization. It is not necessary for all the communications to take place at the synchronization points. It is preferable that each processor sends data as soon as it is available, and that each processor does not start waiting for data until it is needed. Such optimizations must be balanced by the goal of not generating too many messages, since there is a nontrivial overhead associated with processing each message.

Techniques described here have other applications as well. For example, a special-purpose embedded system may use coprocessors to offload some of its computations. Or, instead of demand fetching data into the cache, an embedded system may use a separate controller to load and unload data into and out of the cache, or other data buffers, while the processor operates on other data. In these cases, similar techniques can be used to generate the code to move data around.

We can also use affine loop transforms to optimize the performance of multi-instruction-issue machines. As discussed in Chapter 10.5, the performance of a software-pipelined loop is limited by two factors: cycles in precedence con-straints and the usage of the critical resource. By changing the makeup of the innermost loop, we can improve these limits.

First, we may be able to use loop transforms to create innermost paralleliz-able loops, thus eliminating precedence cycles altogether. Suppose a program has two loops, with the outer being parallelizable and the inner not. We can permute the two loops to make the inner loop parallelizable and so create more opportunities for instruction-level parallelism. Notice that it is not necessary for iterations in the innermost loop to be completely parallelizable. It is suffi-cient that the cycle of dependences in the loop be short enough so that all the hardware resources are fully utilized.

We can also relax the limit due to resource usage by improving the usage balance inside a loop. Suppose one loop only uses the adder, and another uses only the multiplier. Or, suppose one loop is memory bound and another is compute bound. It is desirable to fuse each pair of loops in these examples together so as to utilize all the functional units at the same time.

Besides multiple-instruction issue, there are two other important forms of in-struction-level parallelism: vector and SIMD operations. In both cases, the issue of just one instruction causes the same operation to be applied to a vector of data.

As mentioned previously, many early supercomputers used vector instruc-tions. Vector operations are performed in a pipelined manner; the elements in the vector are fetched serially and computations on different elements are overlapped. In advanced vector machines, vector operations can be chained: as the elements of the vector results are produced, they are immediately con-sumed by operations of another vector instruction without having to wait for all the results to be ready. Moreover, in advanced machines with scatter/gather hardware, the elements of the vectors need not be contiguous; an index vector is used to specify where the elements are located.

SIMD instructions specify that the same operation be performed on contigu-ous memory locations. These instructions load data from memory in parallel, store them in wide registers, and compute on them using parallel hardware. Many media, graphics, and digital-signal-processing applications can benefit from these operations. Low-end media processors can achieve instruction-level parallelism simply by issuing one SIMD instruction at a time. Higher-end pro-cessors can combine SIMD with multiple-instruction issue to achieve higher performance.

SIMD and vector instruction generation share many similarities with locality optimization. As we find independent partitions that operate on contiguous memory locations, we stripmine those iterations and interleave these operations in innermost loops.

SIMD instruction generation poses two additional difficulties. First, some machines require that the SIMD data fetched from memory be aligned. For example, they might require that 25,6-byte SIMD operands be placed in ad-dresses that are multiples of 256. If the sdurce loop operates on just one array of data, we can generate one main loop that operates on aligned data and ex-tra code before and after the loop to handle those elements at the boundary. For loops operating on more than one array, however, it may not be possible to align all the data at the same time. Second, data used by consecutive it-erations in a loop may not be contiguous. Examples include many important digital-signal-processing algorithms, such as Viterbi decoders and fast Fourier transforms. Additional operations to shuffle the data around may be necessary to take advantage of the SIMD instructions.

No data-locality optimization can eliminate all memory accesses; for one, data used for the first time must be fetched from memory. To hide the latency of memory operations, prefetch instructions have been adopted in many high-performance processors. Prefetch is a machine instruction that indicates to the processor that certain data is likely to be used soon, and that it is desirable to load the data into the cache if it is not present already. 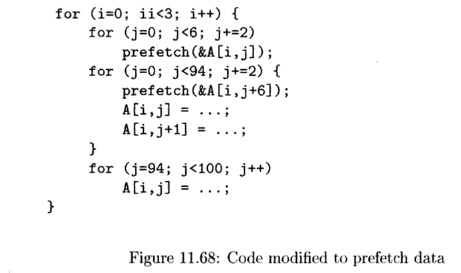 We unroll the innermost loop twice, so a prefetch can be issued for each cache line. We use the concept of software pipelining to prefetch data six iterations before it is used. The prolog fetches the data used in the first six iterations. The steady state loop prefetches six iterations ahead as it performs its computation. The epilog issues no prefetches, but simply executes the remaining iterations.

• Parallelism and Locality from Arrays. The most important opportunities for both parallelism and locality-based optimizations come from loops that access arrays. These loops tend to have limited dependences among accesses to array elements and tend to access arrays in a regular pattern, allowing efficient use of the cache for good locality.

• Affine Accesses. Almost all theory and techniques for parallelism and locality optimization assume accesses to arrays are affine: the expressions for the array indexes are linear functions of the loop indexes.

Reration Spaces. A loop nest with d nested loops defines a d-dimensional iteration space. The points in the space are the d-tuples of values that the loop indexes can assume during the execution of the loop nest. In the affine case, the limits on each loop index are linear functions of the outer loop indexes, so the iteration space is a polyhedron.

• Data Dependences and Array Accesses. A central problem we must solve in order to manipulate loops for parallelism and locality optimizations is whether two array accesses have a data dependence (can touch the same array element). When the accesses and loop bounds are affine, the problem can be expressed as whether there are solutions to a matrix-vector equation within the polyhedron that defines the iteration space.

• Matrix Rank and Data Reuse. The matrix that describes an array access can tell us several important things about that access. If the rank of the matrix is as large as possible (minimum of the number of rows and number of columns), then the access never touches the same element twice as the loops iterate. If the array is stored in row- (column-)major form, then the rank of the matrix with the last (first) row deleted tells us whether the access has good locality; i.e., elements in a single cache line are accessed at about the same time.

• Data Dependence and Diophantine Equations. Just because two accesses to the same array touch the same region of the array does not mean that they actually access any element in common. The reason is that each may skip some elements; e.g., one accesses even elements and the other accesses odd elements. In order to be sure that there is a data dependence, we must solve a Diophantine (integer solutions only) equation.

Solving Diophantine Linear Equations. The key technique is to compute the greatest common divisor (GCD) of the coefficients of the variables. Only if that GCD divides the constant term will there be integer solutions.

• Space-Partition Constraints. To parallelize the execution of a loop nest, we need to map the iterations of the loop to a space of processors, which can have one or more dimensions. The space-partition constraints say that if two accesses in two different iterations share a data dependence (i.e., they access the same array element), then they must map to the same processor. As long as the mapping of iterations to processors is affine, we can formulate the problem in matrix-vector terms.

• Primitive Code Transformations. The transformations used to parallelize programs with affine array accesses are combinations of seven primitives: loop fusion, loop fission, re-indexing (adding a constant to loop indexes), scaling (multiplying loop indexes by a constant), reversal (of a loop index), permutation (of the order of loops), and skewing (rewriting loops so the line of passage through the iteration space is no longer along one of the axes).

• Pipelining. This parallelization technique allows processors to share data, by synchronously passing certain data (typically array elements) from one processor to an adjacent processor in the processor space. The method can improve the locality of the data accessed by each processor.

Time-Partition  Constraints. To  discover  opportunities for  pipelining,  we  need to discover solutions to the time-partition constraints.  These say  that whenever two array accesses can touch the same array element, then  the access in the iteration that occurs first must be assigned to a stage in the pipeline that occurs no later than the stage to which the second access is assigned.

Solving Time-Partition  Constraints.   Farkas'  Lemma provides a  powerful technique for finding all the affine time-partition mappings that  are allowed by a given loop nest with array accesses.  The technique is es- sentially to replace the primal formulation of the linear inequalities that express the time-partition constraints by their dual.

• Blocking. This technique breaks each of several loops in a loop nest into two loops each. The advantage is that doing so may allow us to work on small sections (blocks) of a multidimensional array, one block at a time. That, in turn, improves the locality of the program, letting all the needed data reside in the cache while working on a single block.

• Stripmining. Similar to blocking, this technique breaks only a subset of the loops of a loop nest into two loops each. A possible advantage is that a multidimensional array is accessed a "strip" at a time, which may lead to the best possible cache utilization.