1. All populations in a given physical area are defined as

2. Organisms which can survive a wide range of temperatuer are called

3. The interaction in nature, where one gets benefit on the expense of other is...

4. Predation and parasitism are which type of interactions?

5. Competition between species leads to

6. Which of the following is an r-species

7. Match the following and choose the correct combination from the options given below.

2. Round worm and man

3. Birds compete with squirrels for nuts

8. The figure given below is a diagrammatic representation of response of organisms to abiotic factors. What do A, B and C represent respectively. 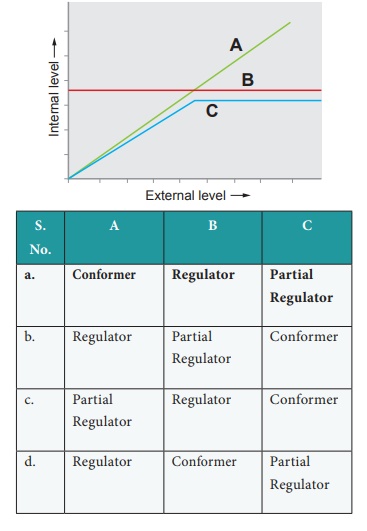 10. What type of human population is represented by the following age pyramid?

11. Which of the following is correct for r-selected species

a) Large number of progeny with small size

b) large number of progeny with large size

12. Animals that can move from fresh water to sea called as.....

13. Some organisms are able to maintain homeostasis by physical means ...

19. What is soil permeability?

21. Explain hibernation and aestivation with examples.

22. Give the diagnostic characters features of a Biome?

23. Classify the aquatic biomes of Earth.

24. What are the ways by which organisms respond to abiotic factors?

29. What is ecological density, crude density and population density?

31. Differentiate between Tundra and Taiga Biomes.

36. Explain parasitism with an example.

37. Differentiate between predator and prey.

1. Which one of the following is most appropriately defined?

a) Host is an organism which provides food to another organism.

b) Amensalism is a relationship in which one species is benefited whereas the other is unaffected.

c) Predator is an organism that catches and kills other organism for food.

d) Parasite is an organism which always lives inside the body of other organism and may kill it.

2. Study the four statements (1 to 4) given below and select the two correct ones out of them.

A) A lion eating a deer and a sparrow feeding on grain are ecologically similar in being consumers.

B) Predator star fish Pisaster helps in maintaining species diversity of some invertebrates.

C) Predators ultimately lead to the extinction of prey species.

D) Production of chemicals such as nicotine, strychnine by the plants is metabolic disorders.

The two correct statements are

3. Which two of the following changes ( 1 to 4) usually tend to occur in the plain dwellers when they move to high altitudes(3500 m or more)?

4. Consider the following four conditions (A-D) and select the correct pair of them as adaptation to environment in desert lizards. The conditions:

A) Burrowing in soil to escape high temperature.

B) Losing heat rapidly from the body during high temperature

C) Bask in sun when temperature is low

5. People who have migrated from the planes to an area adjoining Rohtang Pass about six months back

a)Have more RBC’s and their haemoglobin has a lower binding affinity to O2.

b) Are not physically fit to play games like football

d) Have the usual RBC count but then haemoglobin has very high binding affinity to O2.

6. A biologist studies the population of eats in a barn. He found that the average natality was 250, average mortality is 240, immigration is 20 and emigration to be 30. The net increase in population is

7. An association of individuals of different species living in the same habitat and having functional interaction is:

a) When N/K is exactly one

b) When N nears the carrying capacity of the habitat

d) When dearth rate is greater than birth rate