Organ of Corti - Structure of The Ear 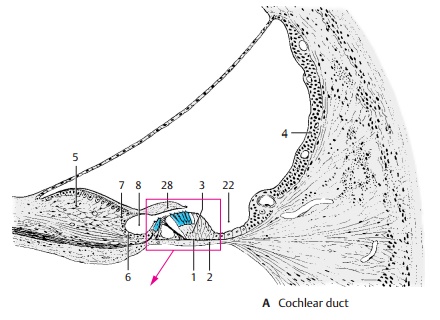 The basilar membrane (AB1) is covered on its lower surface by connective tissue cells that line the scala tympani (AB2); on its upper surface rests the organ of Corti, or spiralorgan (A3, B).

The basilar membrane (AB1) is covered on its lower surface by connective tissue cells that line the scala tympani (AB2); on its upper surface rests the organ of Corti, or spiralorgan (A3, B). Lateral to the spiral organ, theepithelium continues as the vascular stria (A4), which contains numerous intra-epithelial capillaries. Medial to the spiral organ, at the margin of the bony spiral lamina, lies a thickened tissue layer derived from the inner periosteum, the limbus of thespiral lamina (A5); it is covered by epithelialcells. The limbus tapers off into two lips, the tympanic lip of the limbus(A6) and thevesti-bular lip of the limbus(A7), which enclosethe internal spiral sulcus (A8). 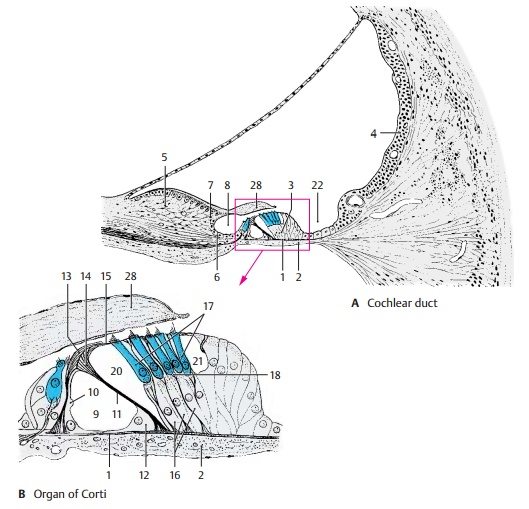 The organ of Corti extends in a spiral from the basal convolution to the cupula of the cochlea. The figures (A, B) show cross sec-tions through the organ; it consists of sensory cells and a variety of supporting cells. The center is occupied by the innertunnel (B9), which contains a perilymph-like fluid, the cortilymph. Its medial wall is formed by the inner pillar cells (B10) and its lateral wall by the obliquely arranged outerpillar cells (B11). The pillar cells have a widebase (B12) containing the cell nucleus, a narrow middle part, and a head. They con-tain long bundles of supporting tonofila-ments. The inner pillar cell forms the head plate (B13), while the outer pillar cell forms a round head part (B14), which approaches the head plate from below, as well as a flat process, the phalangeal process (B15). Later-ally follows the group of Deiters’ supportingcells (outer phalangeal cells) (B16); thesecarry the sensory cells (B17, C) on a protru-sion of their lower part. Their tonofilament bundles branch below the sensory cells to form a support basket (B18). From each Deiters’ cell, a narrow process ascends be-tween the sensory cells and ends with a flat phalangeal process (C19). The phalangeal processes together form a perforated super-ficial membrane, the reticular membrane, and the apical ends of the sensory cells are firmly secured in the openings of the mem-brane. Between the outer pillar cells and the Deiters’ cells lies the inner tunnel, or Corti’sspace (B20), and laterally to the Deiters’cells lies the small outer tunnel, or Nuel’sspace (B21). This is followed by a group ofsimple, elongated supporting cells that merge into the epithelium of the vascular stria to form the medial wall of the externalspiral sulcus (A22). The inner phalangealcells border onto the inner pillar cells.

The sensory cells (C) include the inner haircells (C23), which form only one row, andthe outer hair cells (C24); the latter form three rows in the basal convolution of the cochlea, four rows in the middle convolu-tion, and five rows in the upper convolution. All hair cells have below their apical surface a dense terminal web of microfilaments (C25) through which the sensory hairs (C26) are firmly secured. The sensory hairs are stiff, specialized microvilli (stereovilli) which are arranged in a semicircle, usually in three rows of different lengths. Nerve fibers with synapse – like contacts (C27) ter-minate at the base of the hair cells. 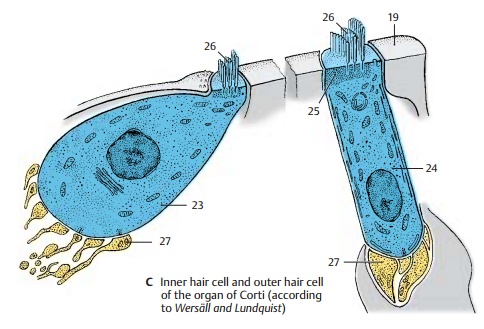