Auditory Pathway of The Ear

Cochlear Nuclei (A, B) 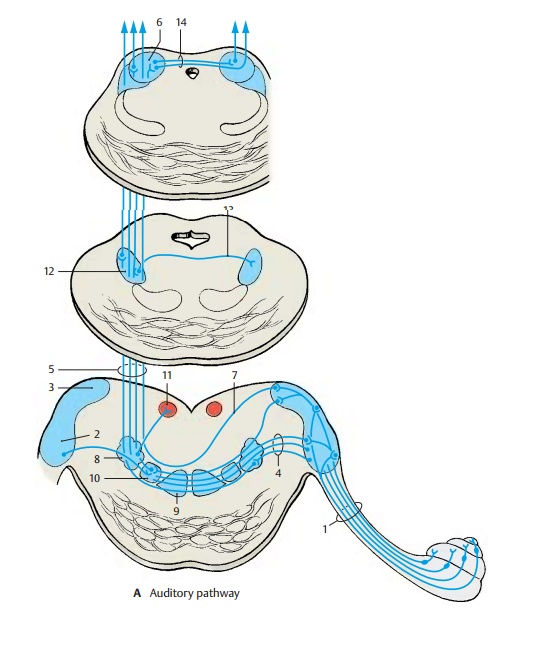 Such a tonotopic organization of the cochlear complex can be demonstrated by electrical recordings in an experimental an-imal (cat) (B). Recordings from individual neurons and simultaneous sonication with different sounds can detect the frequency at which an individual cell responds best. The frontal section through the oral region of the cochlear nuclei shows how the elec-trode, which scans from top to bottom, reg-isters in the posterior nucleus (B3) the recorded points in a precise sequence from high to low frequencies. Here lie the neu-rons for specific tonal frequencies in a regular sequence. When the electrode enters the anterior nucleus (B2), this sequence sud-denly stops and frequencies oscillate only in a specific range. 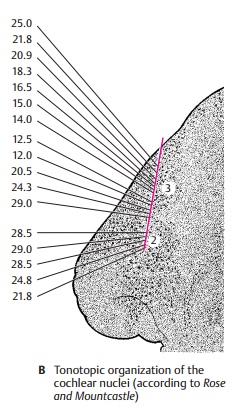 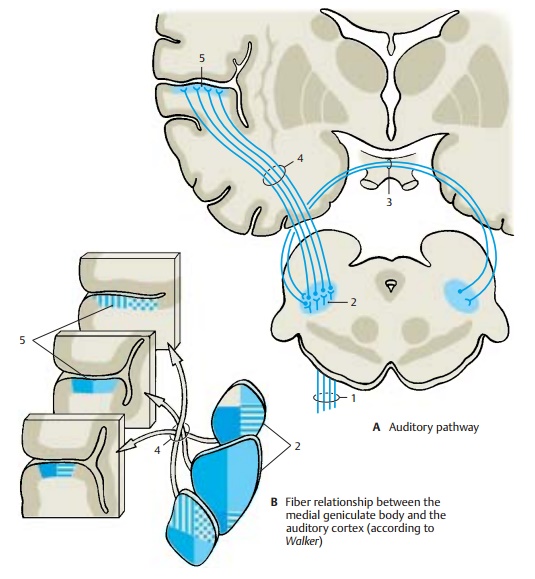 Medial Geniculate Body (A, B)

Acoustic Radiation (A, B)

Electrical recordings from the cortex of various experimental animals (cat, monkeyunder simultaneous exposure to sounds of different frequencies have uncovered the tonotopic organization of the auditory cor-tex (AB5, C), where the uncoiled cochlea is represented from the basal convolution to the cupula. Three regions of hearing have been demonstrated: the primary auditoryarea (AI) (C6), the secondary auditory area (AII)(C7), and the area of the posterior ectosylviangyrus(Ep) (C8). In the primary auditory area,the neurons responding best to high frequencies (large blue dots) lie rostrally; the neurons responding best to low frequencies (small blue dots) lie caudally. In the secondary auditory area, the frequency sensitivity is arranged in the reverse order. Auditory area AI is the primary terminal ofthe acoustic radiation, while auditory areasAII and Ep are regarded assecondary audi-tory areas. The relationships may be com-pared to those of the visual cortex, where area 17 is the terminal of the optic radiation while areas 18 and 19 are secondary inte-gration areas. Auditory area AI corresponds in humans to area 41, which covers Heschl’s convolutions (transverse temporal gyri) and is the terminal of the acoustic radiation. Areas 42 and 22 are secondary auditory areas and include Wernicke’s speech center for the comprehension of lan-guages.  Hence, the auditory cor-tex must be regarded as a region much larger than Heschl’s convolutions.

The auditory pathway has several commis-sural systems along its course that provide fiber exchanges at various levels. Some fiber bundles also ascend to the ipsilateralaudi-tory cortex. The latter therefore receives im-pulses from both organs of Corti, and this is especially important for directional hearing.