Optocouplers or Optoisolators is a combination of light source & light detector in the same package.

· Optocouplers or Optoisolators is a combination of light source & light detector in the same package.

·           They are used to couple signal from one point to other optically, by providing a completer electric isolation between them. This kind of isolation is provided between a low power control circuit & high power output circuit, to protect the control circuit.

·           Depending on the type of light source & detector used we can get a variety of optocouplers.

They are as follows,

Its value depends on the devices used as source detector. (ii) Isolation voltage between

It is the maximum voltage which can exist differentially between the input & output without affecting the electrical isolation voltage is specified in K Vrms with a relative humidity of 40 to 60%.

Eventhough the optocouplers are electrically isolated for dc & low frequency signals, an impulsive input signal (the signal which changes suddenly) can give rise to a displacement currentIc= Cf*dv/dt. This current can flow between input & output due to the capacitance Cf existing between input & output. This allow the noise to appear in the output. 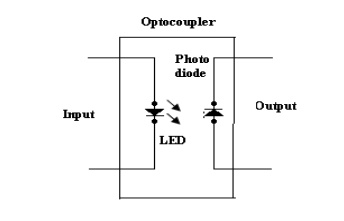 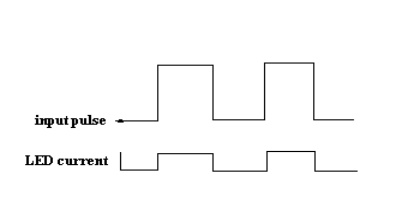 ·           LED photodiode shown in figure, here the infrared LED acts as a light source & photodiode is used as a detector.

·           The advantage of using the photodiode is its high linearity. When the pulse at the input goes high, the LED turns ON. It emits light. This light is focused on the photodiode. 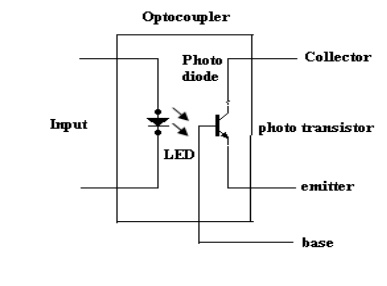 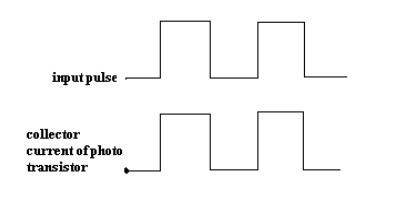 ·           This is the most popularly used optocoupler, because it does not need any additional amplification.

·           When the pulse at the input goes high, the LED turns ON. The light emitted by the LED is focused on the CB junction of the phototransistor.

·           In response to this light photocurrent starts flowing which acts as a base current for the phototransistor.

·           Control circuits are well protected due to electrical isolation.

·           Due to unidirectional signal transfer, noise from the output side does not get coupled to the input side.

·           At the same time the control signals are coupled from the control circuits to the high power circuits.

·           One of the most important applications of an optocoupler is to couple the base driving signals to a power transistor connected in a DC-DC chopper.

·           Note that the input & output waveforms are 180º out of phase as the output is taken at the collector of the phototransistor.