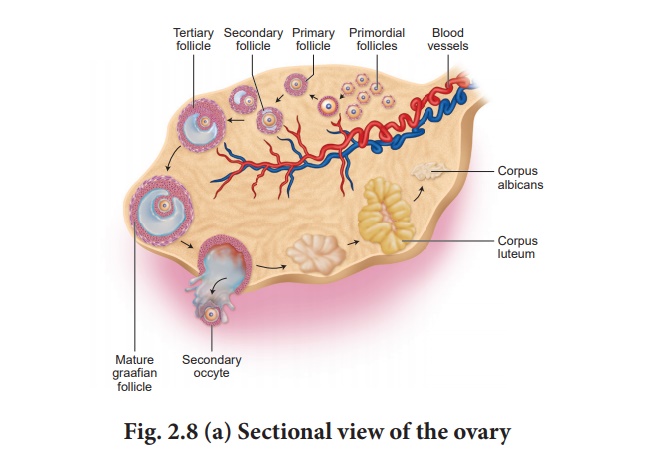 Oogenesis is the process of development of the female gamete or ovum or egg in the ovaries.

Oogenesis is the process of development of the female gamete or ovum or egg in the ovaries. During foetal development, certain cells in the germinal epithelium of the foetal ovary divide by mitosis and produce millions of egg mother cells or oogonia. No more oogonia are formed or added after birth. The oogonial cells start dividing and enter into Prophase I of meiotic division I to form the primary oocytes which are temporarily arrested at this stage. The primary oocytes then get surrounded by a single layer of granulosa cells to form the primordial or primary follicles (Fig. 2.8 a). A large number of follicles degenerate during the period from birth to puberty, so at puberty only 60,000 to 80,000 follicles are left in each ovary. 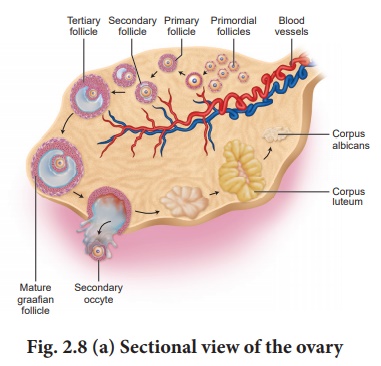 The primary follicle gets surrounded by many layers of granulosa cells and a new theca layer to form the secondary follicle. A fluid filled space, the antrum develops in the follicle and gets transformed into a tertiary follicle. The theca layer gets organized into an inner theca interna and an outer theca externa. At this time, the primary oocyte within the tertiary follicle grows in size and completes its first meiotic division and forms the secondary oocyte. It is an unequal division resulting in the formation of a large haploid secondary oocyte and a first polar body. The first polar body disintegrates. During fertilisation, the secondary oocyte undergoes second meiotic division and produces a large cell, the ovum and a second polar body. The second polar body also degenerates. The tertiary follicle eventually becomes a mature follicle or Graafian follicle. If fertilisation does not take place, second meiotic division is never completed and the egg disintegrates. At the end of gametogenesis in females, each primary oocyte gives rise to only one haploid ovum.