Fertilisation occurs when a haploid sperm fuses with a haploid ovum to form a fertilized egg or diploid zygote.

Fertilisation occurs when a haploid sperm fuses with a haploid ovum to form a fertilized egg or diploid zygote.

The sperms deposited in the female reproductive tract undergo capacitation, which is a biochemical event that enables the sperm to penetrate and fertilise the egg. Fertilisation occurs only if the ovum and sperms are transported simultaneously to the ampullary isthmic junction of the fallopian tube.

Before a sperm can enter the egg, it must penetrate the multiple layers of granulosa (follicular) cells which are around the ovum forming the corona radiata (Fig. 2.10). The follicular cells are held together by an adhesive cementing substance called hyaluronic acid. The acrosomal membrane disintegrates releasing the proteolytic enzyme, hyaluronidase during sperm entry through the corona radiata and zona pellucida. This is called acrosomal reaction. Once fertilisation is accomplished, cortical granules from the cytoplasm of the ovum form a barrier called the fertilisation membrane around the ovum preventing further penetration of other sperms. Thus polyspermy is prevented. 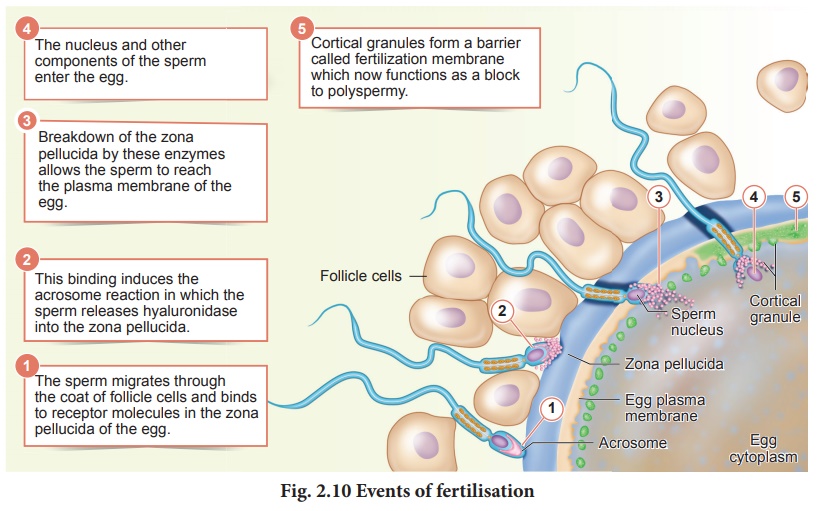 The first cleavage produces two identical cells called blastomeres. These produce 4 cells, then 8 and so on. After 72 hours of fertilisation, a loose collection of cells forms a berry shaped cluster of 16 or more cells called the morula (Fig.2.11). 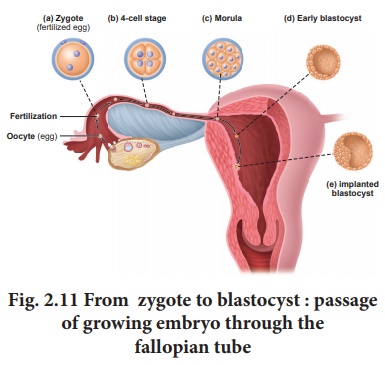 Under the influence of progesterone, smooth muscles of the fallopian tube relax and the dividing embryo takes 4- 5 days to move through the fallopian tube into the uterine cavity and finally gets implanted in the uterine wall. At this point the embryo consists of a fluid filled hollow ball of about 100 cells, called the blastocyst. The blastocyst is composed of a single layer of large flattened cells called trophoblast and a small cluster of 20- 30 rounded cells called the inner cell mass. The inner cell mass of the blastocyst develops into the embryo and becomes embedded in the endometrium of the uterus. This process is called implantation and it results in pregnancy.

Twins are two offsprings produced in the same pregnancy.

➢  Monozygotic (Identical) twins are produced when a single fertilised egg splits into two during the first cleavage. They are of the same sex, look alike and share the same genes.

➢  Dizygotic (Fraternal) twins are produced when two separate eggs are fertilised by two separate sperms. The twins may be of the same sex or different sex and are non-identical.

➢  Siamese (United) twins are the conjoined twins who are joined during birth.