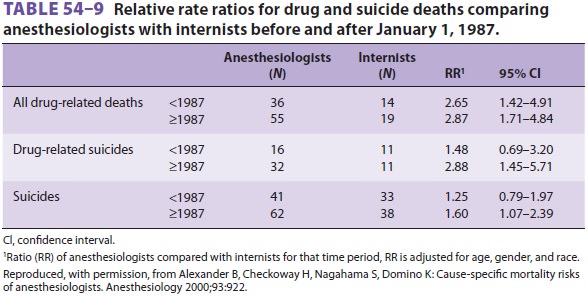 There is no clear evidence that exposure to trace amounts of anesthetic agents presents ahealth hazard to operating room personnel. How-ever, because previous studies examining this issue have yielded flawed but conflicting results, the US Occupational Health and Safety Administration continues to set maximum acceptable trace concen-trations of less than 25 ppm for nitrous oxide and 0.5 ppm for halogenated anesthetics (2 ppm if the halogenated agent is used alone). Achieving these low levels depends on efficient scavenging equip-ment, adequate operating room ventilation, and conscientious anesthetic technique. Most people cannot detect the odor of volatile agents at a concen-tration of less than 30 ppm. If there is no functioning scavenging system, anesthetic gas concentrations reach 3000 ppm for nitrous oxide and 50 ppm for volatile agents.

Early studies indicated that female operating room staff might be at increased risk of spontaneous abortion compared with other women. It is unclear if other factors related to operating room activ-ity could also contribute to the possibly increased potential for pregnancy loss.

Hospital workers are exposed to many infectious diseases prevalent in the community (eg, respiratory viral infections, rubella, and tuberculosis).

Herpetic whitlow is an infection of the finger with herpes simplex virus type 1 or 2 and usually involves direct contact of previously traumatized skin with contaminated oral secretions. Painful ves-icles appear at the site of infection. The diagnosis is confirmed by the appearance of giant epithelial cells or nuclear inclusion bodies in a smear taken from the base of a vesicle, the presence of a rise in herpes simplex virus titer, or identification of the virus with antiserum. Treatment is conservative and includes topical application of 5% acyclovir ointment. Pre-vention involves wearing gloves when contacting oral secretions. Patients at risk of harboring the virus include those suffering from other infections, immunosuppression, cancer, and malnutrition. The risk of this condition has virtually disappeared now that anesthesia personnel routinely wear gloves dur-ing manipulation of the airway, which was not the case in the 1980s and earlier.

Viral DNA has been identified in the smoke plume generated during laser treatment of condy-lomata. The theoretical possibility of viral transmis-sion from this source can be minimized by using smoke evacuators, gloves, and appropriate OSHA approved masks.

More disturbing is the potential of acquiring serious blood-borne infections, such as hepatitis B, hepatitis C, or human immunodeficiency virus (HIV). Although parenteral transmission of these diseases can occur following mucous membrane, cutaneous, or percutaneous exposure to infected body fluids, accidental injury with a needle contami-nated with infected blood represents the most com-mon occupational mechanism. The risk of transmission can be estimated if three factors are known: the prevalence of the infection within the patient population, the incidence of exposure (eg, frequency of needlestick), and the rate of serocon-version after a single exposure. The seroconversion rate after a specific exposure depends on several fac-tors, including the infectivity of the organism, the stage of the patient’s disease (extent of viremia), the size of the inoculum, and the immune status of the healthcare provider. Rates of seroconversion fol-lowing a single needlestick are estimated to rangebetween 0.3% and 30%. Hollow (hypodermic) needles pose a greater risk than do solid (surgical) needles because of the potentially larger inoc-ulum. The use of gloves, needleless systems, or protected needle devices may decrease the incidence of some (but not all) types of injury.

The initial management of needlesticks involves cleaning the wound and notifying the appropriate authority within the health care facil-ity. After an exposure, anesthesia workers should report to their institution’s emergency or employee health department for appropriate counseling on postexposure prophylaxis options. All OR staff should be made aware of the institution’s employee health notification pathway for needle stick and other injuries

Fulminant hepatitis B (1% of acute infections) carries a 60% mortality rate. Chronic active hepati-tis (<5% of all cases) is associated with an increased incidence of cirrhosis of the liver and hepatocellu-lar carcinoma. Transmission of the virus is primar-ily through contact with blood products or body fluids. The diagnosis is confirmed by detection of hepatitis B surface antigen (HBsAg). Uncompli-cated recovery is signaled by the disappearance of HBsAg and the appearance of antibody to the surface antigen (anti-HBs). A hepatitis B vaccine is available and is strongly recommended prophylac-tically for anesthesia personnel. The appearance of anti-HBs after a three-dose regimen indicates suc-cessful immunization.

Anesthesia personnel seem to be at a low, but measureable, risk for the occupational contraction of HIV. The risk of acquiring HIV infection follow-ing a single needlestick contaminated with blood from an HIV-infected patient has been estimated at 0.4% to 0.5%. Because there are documented reports of transmission of HIV from infected patients to healthcare workers (including anesthesiologists), the Centers for Disease Control and Prevention proposed guidelines that apply to all categories of patient contact. These universal precautions, which are equally valid for protection against hepatitis B orinfection, are as follows:

·        No recapping and the immediate disposal of contaminated needles

·        Particular caution by pregnant healthcare workers, and no contact with patients by workers who have exudative or weeping skin lesions

Anesthesiology is a high-risk medical spe-cialty for substance abuse. Probable reasonsfor this include the stress of anesthetic practice and the easy availability of drugs with addiction poten-tial (potentially attracting people at risk of addiction to the field). The likelihood of developing substance abuse is increased by coexisting personal problems (eg, marital or financial difficulties) or a family his-tory of alcoholism or drug addiction.

The voluntary use of nonprescribed mood-altering pharmaceuticals is a disease. If left untreated, substance abuse often leads to death from drug overdose—intentional or unintentional. One of the greatest challenges in treating drug abuse is identify-ing the afflicted individual, as denial is a consistent feature. Unfortunately, changes evident to an out-side observer are often both vague and late: reduced involvement in social activities, subtle changes in appearance, extreme mood swings, and altered work habits. Treatment begins with a careful, well-planned intervention. Those inexperienced in this area would be well advised to consult with their local medical society or licensing authority about how to proceed. The goal is to enroll the individual in a formal reha-bilitation program. The possibility that one may lose one’s medical license and be unable to return to practice provides powerful motivation. Some diver-sion programs report a success rate of approximately 70%; however, most rehabilitation programs reportrecurrence rate of at least 25%. Long-term compli-ance often involves continued participation in sup-port groups (eg, Narcotics Anonymous), random urine testing, and oral naltrexone therapy (a long-acting opioid antagonist). Effective prevention strat-egies are difficult to formulate; “better” control of drug availability is unlikely to deter a determined individual. It is unlikely that education about the severe consequences of substance abuse will bring new information to the potential drug-abusing physician. There remains controversy regarding the rate at which anesthesia staff will experience recidi-vism. Many experts argue for a “one strike and you’re out” policy for anesthesiology residents who abuse injectable drugs. The decision as to whether a fully trained and certified physician who has been dis-covered to abuse injectable drugs should return to anesthetic practice after completing a rehabilitation program varies and depends on the rules and tra-ditions of the practice group, the medical center, the relevant medical licensing board, and the per-ceived likelihood of recidivism. Physicians return-ing to practice following successful completion of a program must be carefully monitored over the long term, as relapses can occur years after apparent suc-cessful rehabilitation. Alcohol abuse is a common problem among physicians and nurses, and anes-thesia personnel are no exception. Interventions for alcohol abuse, as is true for injectable drug abuse, must be carefully orchestrated. Guidance from the local medical society or licensing authority is highly recommended.

The use of imaging equipment (eg, fluoroscopy) during surgery and interventional radiologic proce-dures exposes the anesthesiologist to the potentialrisks of ionizing radiation. The three most important methods of minimizing radiationdoses are limiting total exposure time during pro-cedures, using proper barriers, and maximizing the distance from the source of radiation. Anesthesiolo-gists who routinely perform fluoroscopic image guided invasive procedures should consider wearing protective eyeware incorporating radiation shield-ing. Lead glass partitions or lead aprons with thyroid shields are mandatory protection for all personnel who are exposed to ionizing radiation. The inverse square law states that the dosage of radiation varies inversely with the square of the distance. Thus, the exposure at 4 m will be one-sixteenth that at 1 m. The maximum recommended occupational whole-body exposure to radiation is 5 rem/yr. This can be monitored with an exposure badge. The health impact on operating room personnel of exposure to electromagnetic radiation remains unclear.