Hypersensitivity (or allergic) reactions are exagger-ated immunological responses to antigenic stimula-tion in previously sensitized persons. The antigen, or 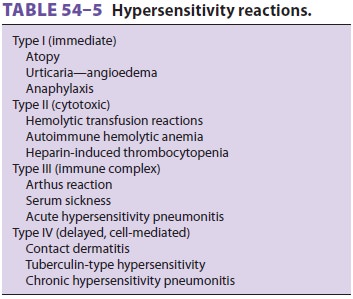 allergen, may be a protein, polypeptide, or smaller molecule. Moreover, the allergen may be the sub-stance itself, a metabolite, or a breakdown product. Patients may be exposed to antigens through the respiratory tract, gastrointestinal tract, eyes, skin and from previous intravenous, intramuscular, or peritoneal exposure.

Anaphylaxis occurs when inflammatory agents are released from basophils and mast cells as a result of an antigen interacting with the immunoglobulin (Ig) E. Anaphylactoid reactions manifest themselves in the same manner as anaphylactic reactions, but are not the result of an interaction with IgE. Direct activation of complement and IgG-mediated com-plement activation can result in similar inflamma-tory mediator release and activity.

Depending on the antigen and the immune sys-tem components involved, hypersensitivity reactions are classically divided into four types (Table 54–5). In many cases, an allergen (eg, latex) may cause more than one type of hypersensitivity reaction. Type I reactions involve antigens that cross-link IgE antibodies, triggering the release of inflamma-tory mediators from mast cells. In type II reactions, complement-fixing (C1-binding) IgG antibodies bind to antigens on cell surfaces, activating the classic complement pathway and lysing the cells. Examples of type II reactions include hemolytic transfusion reactions and heparin-induced thrombocytopenia. Type III reactions occur when antigen–antibody(IgG or IgM) immune complexes are deposited in tissues, activating complement and generating che-motactic factors that attract neutrophils to the area. The activated neutrophils cause tissue injury by releasing lysosomal enzymes and toxic products. Type III reactions include serum sickness reactions and acute hypersensitivity pneumonitis. Type IV reactions, often referred to as delayed hypersensitiv-ity reactions, are mediated by CD4 + T lymphocytes that have been sensitized to a specific antigen by prior exposure. Prior TH1 response causes expres-sion of a T-cell receptor protein that is specific for the antigen. Reexposure to the antigen causes these lymphocytes to produce lymphokines—interleukins (IL), interferon (IFN), and tumor necrosis factor-γ (TNF-γ)—that attract and activate inflammatory mononuclear cells over 48–72 hr. Production of IL-1 and IL-6 by antigen-processing cells amplifies clonal expression of the specific sensitized T cells and attracts other types of T cells. IL-2 secretion trans-forms CD8+ cytotoxic T cells into killer cells; IL-4 and IFN-γ cause macrophages to undergo epithe-lioid transformation, often producing granuloma. Examples of type IV reactions are those associated with tuberculosis, histoplasmosis, schistosomiasis, and hypersensitivity pneumonitis and some autoim-mune disorders, such as rheumatoid arthritis and Wegener’s granulomatosis.

Initial exposure of a susceptible person to an antigen induces CD4+ T cells to lymphokines that activateand transform specific B lymphocytes into plasma cells, producing allergen-specific IgE antibodies (Figure 54–7). The Fc portion of these antibodies then associates with high affinity receptors on the cell surface of tissue mast cells and circulating baso-phils. During subsequent reexposure to the antigen, it binds the Fab portion of adjacent IgE antibodies on the mast cell surface, inducing degranulation and release of inflammatory lipid mediators and addi-tional cytokines from the mast cell. The end result is the release of histamine, tryptase, proteoglycans (heparin and chondroitin sulfate), and carboxy-peptidases. Prostaglandin (mainly prostaglandinD2) and leukotriene (B4, C4, D4, E4, and platelet-activating factor) synthesis is also increased. The combined effects of these mediators can produce arteriolar vasodilatation, increased vascular perme-ability, increased mucus secretion, smooth muscle contraction, and other clinical manifestations of type I reactions. 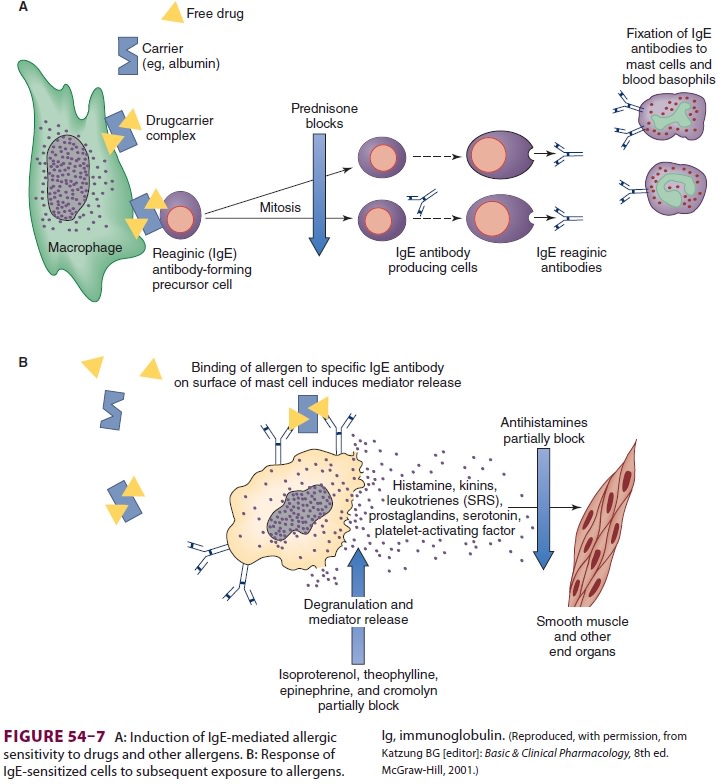 Type I hypersensitivity reactions are classified as atopic or nonatopic. Atopic disorders typically affect the skin or respiratory tract and include aller-gic rhinitis, atopic dermatitis, and allergic asthma. Nonatopic hypersensitivity disorders include urti-caria, angioedema, and anaphylaxis; when these reactions are mild, they are confined to the skin (urticaria) or subcutaneous tissue (angioedema), but when they are severe, they become generalized and a life-threatening medical emergency (ana-phylaxis). Urticarial lesions are characteristically well-circumscribed skin wheals with raised ery-thematous borders and blanched centers; they are intensely pruritic. Angioedema presents as deep, nonpitting cutaneous edema from marked vasodi-latation and increased permeability of subcutaneous blood vessels. When angioedema is extensive, it can be associated with large fluid shifts; when it involves the pharyngeal or laryngeal mucosa, it can rapidly compromise the airway.

Anaphylaxis isanexaggerated response to anallergen (eg, antibiotic) that is mediated by a type hypersensitivity reaction. The syndrome appears within minutes of exposure to a specific antigen in a sensitized person and characteristically presents as acute respiratory distress, circulatory shock, or both. Death may occur from asphyxiation or irreversible circulatory shock. The incidence of anaphylactic reactions during anesthesia has been estimated at a rate of 1:3500 to 1:20000 anesthetics. Mortality from anaphylaxis can be as frequent as 4% of cases with brain injury, occurring in another 2% of surviving patients. A French study evaluating 789 anaphylactic and anaphylactoid reactions reported that the most common sources of perioperative anaphylaxis were neuromuscular blockers (58%), latex (17%), and antibiotics (15%). 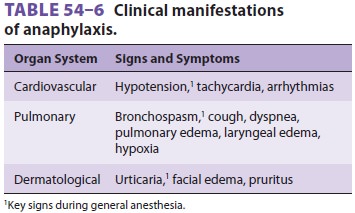 Factors that may predispose patients to these reactions include pregnancy, known atopy, and pre-vious drug exposure. Such reactions are more com-mon in younger than older patients. Laboratory identification of patients who have experienced an adverse allergic reaction or who may be particularly 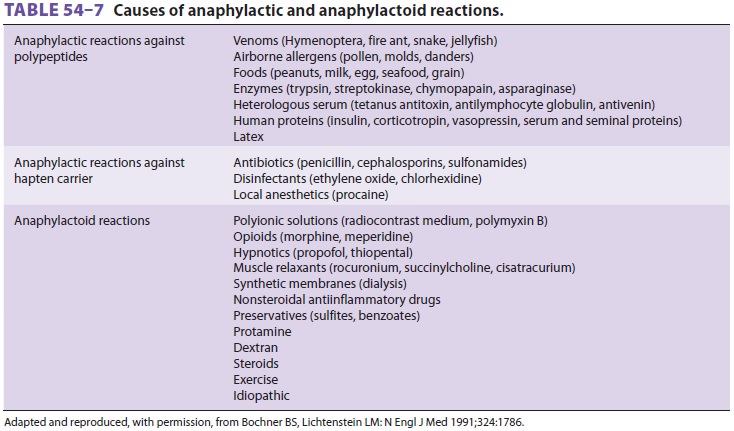 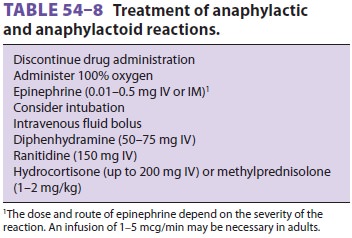 susceptible is often aided by intradermal skin testing, leukocyte or basophil degranulation testing (hista-mine release test), or radio-allergosorbent testing (RAST). The latter is capable of measuring the level of drug-specific IgE antibody in the serum. Serum tryptase measurement is helpful in confirming the diagnosis of an anaphylactic reaction. Prophylactic pretreatment with histamine receptor antagonists and corticosteroids decreases the severity of the reaction. Treatment must be immediate and tailored to the severity of the reaction ( Table 54–8).

True anaphylaxis due to anesthetic agents is rare; anaphylactoid reactions are much morecommon. Risk factors associated with hypersensitiv-ity to anesthetics include female gender, atopic his-tory, preexisting allergies, and previous anesthetic exposures. Muscle relaxants are the most common cause of anaphylaxis during anesthesia, with an esti-mated incidence of 1 in 6500 patients. They account for almost 60% of perioperative anaphylactic reac-tions. In many instances, there was no previous exposure to muscle relaxants. Investigators suggest that over-the-counter drugs, cosmetics, and food products, many of which contain tertiary or quater-nary ammonium ions, can sensitize susceptible indi-viduals. A French study found that, in decreasing order of frequency, rocuronium, succinylcholine, and atracurium were most often responsible; this likely reflects the propensity to cause anaphylaxis, together with frequency of use.Although rarer, hypnotic agents can also be responsible for some allergic reactions. The inci-dence of anaphylaxis for thiopental and propofol is 1 in 30,000 and 1 in 60,000, respectively. Allergic reactions to etomidate, ketamine, and benzodi-azepines are exceedingly rare. True anaphylactic reactions due to opioids are far less common than nonimmune histamine release. Similarly, ana-phylactic reactions to local anesthetics are much less common than vasovagal reactions, toxic reac-tions to accidental intravenous injections, and side effects from absorbed or intravenously injected epi-nephrine. IgE-mediated reactions to ester-type local anesthetics, however, are well described secondary to reaction to the metabolite, para-aminobenzoic acid, In contrast, true anaphylaxis due to amide-type local anesthetics is very rare; in some instances, the preservative (paraben or methylparaben) was believed to be responsible for an apparent anaphy-lactoid reaction to a local anesthetic. Moreover, the cross-reactivity between amide-type local anesthet-ics seems to be low. There are no reports of anaphy-laxis to volatile anesthetics.

The severity of allergic reactions to latex-containing products ranges from mild contact dermatitis to life-threatening anaphylaxis. Latex allergy is the second most common cause of anaphylaxis during anesthe-sia. Most serious reactions seem to involve a direct IgE-mediated immune response to polypeptides in natural latex, although some cases of contact derma-titis may be due to a type IV sensitivity reaction to chemicals introduced in the manufacturing process. Nonetheless, a relationship between the occurrence of contact dermatitis and the probability of future anaphylaxis has been suggested. Chronic exposure to latex and a history of atopy increases the risk of sen-sitization. Healthcare workers and patients undergo-ing frequent procedures with latex items (eg, repeated urinary bladder catheterization, barium enema examinations) should therefore be considered at increased risk. Patients with spina bifida, spinal cord injury, and congenitalabnormalities of the genitourinary tract have an increased incidence of latex allergy. The incidence of latex anaphylaxis in children is estimated to be 1 in 10,000. A history of allergic symptoms to latex should be sought in all patients during the preanes-thetic interview. Foods that cross-react with latex include mango, kiwi, chestnut, avacado, passion fruit, and banana.

IL-18 and IL-13 single nucleotide polymor-phisms may affect the sensitivity of individuals to latex and promote allergic responses.

Anaphylactic reactions to latex may be con-fused with reactions to other substances (eg, drugs, blood products) because the onset of symptoms can be delayed for more than 1 hr after initial exposure. Treatment is the same as for other forms of anaphy-lactic reactions. Skin-prick tests, intradermal tests, basophil histamine-release tests, and RAST have been used to evaluate high-risk patients. Prevent-ing a reaction in sensitized patients includes phar-macological prophylaxis and absolute avoidance of latex. Preoperative administration of H1 and H2 histamine antagonists and steroids may provide some protection, although their use is controver-sial. Although most pieces of anesthetic equipment are now latex-free, some may still contain latex (eg, gloves, tourniquets, some ventilator bellows, intravenous injection ports, and older reusable face masks). An allergic reaction has even been docu-mented from inhalation of latex antigen contained within aerosolized glove powder. Manufacturers of latex-containing medical products must label their products accordingly. Only devices specifi-cally known not to contain latex (eg, polyvinyl or neoprene gloves, silicone endotracheal tubes or laryngeal masks, plastic face masks) can be used in latex-allergic patients. Rubber stoppers should be removed from drug vials prior to use, and injec-tions should be made through plastic stopcocks, if latex has not been eliminated from containers and injection ports.

Many true drug allergies in surgical patients are due to antibiotics, mainly β-lactam antibiotics, such as penicillins and cephalosporins. Although 1% to 4% of β-lactam administrations result in allergic reac-tions, only 0.004% to 0.015% of these reactionsresult in anaphylaxis. Up to 2% of the general population is allergic to penicillin, but only 0.01% of penicillin administrations result in anaphylaxis. Cephalosporin cross-sensitivity in patients with penicillin allergy is estimated to be 2% to 7%, buthistory of an anaphylactic reaction to penicil-lin increases the cross-reactivity rate up to 50%. Patients with a prior history of an anaphylactic reaction to penicillin should therefore not receive a cephalosporin. Although imipenem exhibits similar cross-sensitivity, aztreonam seems to be antigen-ically distinct and reportedly does not cross-react with other β-lactams. Sulfonamide allergy is also relatively common in surgical patients. Sulfa drugs include sulfonamide antibiotics, furosemide, hydro-chlorothiazide, and captopril. Fortunately, the fre-quency of cross-reactivity among these agents is low.

Like cephalosporins, vancomycin is commonly used for antibiotic prophylaxis in surgical patients. Unfortunately, it is associated with adverse reac-tions. An anaphylactoid-type reaction, “red man syndrome,” consists of intense pruritus, flushing, and erythema of the head and upper torso, often with arterial hypotension; this syndrome seems to be related to a rapid rate of administration more than to dose or allergy. Isolated systemic hypoten-sion is a much more frequent side effect and seems to be primarily mediated by histamine release, because pretreatment with H1 and H2 antihistamines can prevent hypotension, even with rapid rates of administration.

Immunologic mechanisms are associated with other perioperative pathologies. Transfusion-related lung injury may be secondary to the activity of anti-bodies in the donor plasma, producing a hyper-sensitivity reaction that results in lung infiltrates and respiratory failure. IgG antibody formation directed at heparin–PF4 complexes results in plate-let activation, thrombosis, and heparin-induced thrombocytopenia.