In a review of the Pediatric Perioperative Cardiac Arrest Registry, which collects informa-tion from about 80 North American institutions that provide pediatric anesthesia, 193 arrests were reported in children between 1998 and 2004.

In a 2007 study reviewing 532 claims in pediatric patients aged <16 years in the ASA Closed Claims database from 1973–2000 (Figure 54–5), a decrease in the proportion of claims for death and brain dam-age was noted over the three decades. Likewise, the percentage of claims related to respiratory events also was reduced. Compared with before 1990, the percentage of claims secondary to respiratory events decreased during the years 1990–2000, account-ing for only 23 % of claims in the latter study years compared with 51% of claims in the 1970s. More-over, the percentage of claims that could be avoided by better monitoring decreased from 63% in the 1970s to 16% in the 1990s. Death and brain dam-age constitute the major complications for which claims are filed. In the 1990s, cardiovascular events joined respiratory complications in sharing the pri-mary causes of pediatric anesthesia litigation. In the study mentioned above, better monitoring and newer airway management techniques may have reduced the incidence of respiratory events leading to litigation-generating complications in the latter years of the review period. Additionally, the possi-bility of a claim being filed secondary to death or brain injury is greater in children who are in ASA classes 3, 4, or 5.

In a review of the Pediatric Perioperative Cardiac Arrest Registry, which collects informa-tion from about 80 North American institutions that provide pediatric anesthesia, 193 arrests were reported in children between 1998 and 2004. Dur-ing the study period, 18% of the arrests were “drug related,” compared with 37% of all arrests during the years 1994–1997. Cardiovascular arrests occurred most often (41%), with hypovolemia and hyperka-lemia being the most common causes. Respiratory arrests (27%) were most commonly associated with laryngospasm. Central venous catheter placement with resultant vascular injury also contributed to some perioperative arrests. Arrests from cardio-vascular causes occurred most frequently during surgery, whereas arrests from respiratory causes tended to occur after surgery. The reduced use of halothane seems to have decreased the incidence of arrests secondary to medication administration. However, hyperkalemia and electrolyte disturbances 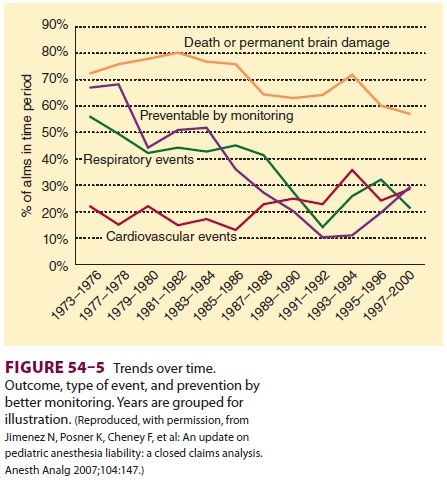 associated with transfusion and hypovolemia also contribute to sources of cardiovascular arrest in chil-dren perioperatively.