Nutrient cycling and transport by fishes

Fishes play an essential role in the processing, transformation, and movement of important nutrients in aquatic ecosystems (e.g., Vanni 2002). Phosphorus is often the nutrient that limits primary production in lakes.

Nutrient cycling and transport by fishes

Fishes play an essential role in the processing, transformation, and movement of important nutrients in aquatic ecosystems (e.g., Vanni 2002). Phosphorus is often the nutrient that limits primary production in lakes. Fishes excrete soluble reactive phosphorus (SRP), a form that is readily taken up by algae. Phosphorus excretion by fishes may be the major source of SRP in many lakes, enhancing phytoplankton production and altering algal community composition (Schindler et al. 1993). Although phytoplankton biomass may increase when zooplanktivorous fishes eat phytoplanktivorous invertebrates, nutrient cycling rather than herbivory may be responsible for a significant portion of this trophic cascade-associated increase in phytoplankton (e.g., Vanni & Layne 1997; Vanni et al. 1997).

Fishes also function to move nutrients between different compartments of a lake ecosystem. Benthic-feeding fishes disturb sediments, accelerating the rate of exchange of nutrients between the water and bottom muds. The concentration of dissolved nitrogen and phosphorus is greater in the water and reduced in sediments when more bottomfeeding fishes are active. Vertically migrating fishes serve as transporters of important nutrients between colder, deeper waters and surface layers where most primary productivity occurs. Peamouth Chub (Mylocheilus caurinus) feed on benthic invertebrates at depths greater than 20 m and then migrate to the surface at night during the summer and fall, where excretion and defecation can release nutrients in forms usable by plants. The movement of nutrients across the physical boundary of the thermocline is otherwise limited mostly to periods when the lake turns over, which may occur only once or twice annually in many temperate lakes and rarely in permanently stratified tropical lakes (Northcote et al. 1964; Northcote 1988).

Fishes can represent a major reservoir of nutrients that are essential for primary production and can therefore become part of the bottom-up pathway affecting ecosystem function. In some lentic habitats, 90% of the phosphorus in the water column may be bound up in Bluegill. These nutrients are released through excretion from the gills, through defecation, and through decomposition after death. Approximately 20% of the internal phosphorus entering a large Quebec lake during the spring could have come from decomposing fish that died after spawning (Nakashima & Leggett 1980). Excretion and defecation by Roach (Rutilus rutilus) contributed about 30% of the total phosphorus in the epilimnion of a deep Norwegian lake during the growing season (Brabrand et al. 1985). Fish feces and mucus could be important sources of iron in lakes where algal growth is iron-limited. Fish removal experiments often lead to reductions in phosphorus and nitrogen levels in lake waters, whereas fish additions generally lead to increases in nitrogen compounds, except where herbivorous fishes are involved. When macrophytes are eaten, nutrients become available for uptake by phytoplankton (Northcote 1988).

Fishes can act to link different ecosystems together, such as seasonal migrations by characins in Neotropical rivers that make it possible for unproductive, nutrient-poor rivers to house large numbers of piscivores (e.g., Hoeinghaus et al. 2006). Such linkages are illustrated nicely by the life cycles of Pacific salmons and their impact on the energy and nutrient budgets of the different systems they inhabit. Most salmon hatch in loworder (relatively small) headwater streams. After some time in the river or a lake, the fish move downstream and out to sea. Although abundant in numbers, their major impact on the stream or lake ecosystem while en route to the sea is as food for birds and other fishes, including larger salmon. As they move to sea, they represent a relatively minor loss of nutrients and energy from the river; about three times more phosphorus is gained during runs of adults into lakes than is lost when smolts emigrate (Stockner 1987). In the year or more they spend at sea, growth accelerates substantially. The 5 g Sockeye Salmon smolt that left its home river 2–4 years earlier may return as a 3 kg adult. In Babine Lake, British Columbia, 160 tons of smolts leave the lake each year. Despite 95% mortality while at sea, 3400 tons of maturing adults return to the lake. As thousands (historically millions) of these now mature salmon move back to their natal streams, they constitute a large proportion of the animal biomass present. Even Atlantic Salmon, many of which survive spawning at least once rather than dying, contribute significantly and positively to the nutrient and energy budgets of the rivers to which they return (e.g., Jonsson & Jonsson 2003).

Salmon, especially returning adults, also constitute a crucial food source for predators, including seals, sea lions, and killer whales in the nearshore zone, and other piscivores in the river itself (Fig. 25.15).

Willson and Halupka (1995) identified 40 species of inland mammals and birds that feed on salmon, including ducks, geese, gulls, dippers, and robins on eggs; loons, mergansers, herons, terns, kingfishers, and crows on juveniles; and eagles, hawks, magpies, ravens, and jays on adults and carcasses. 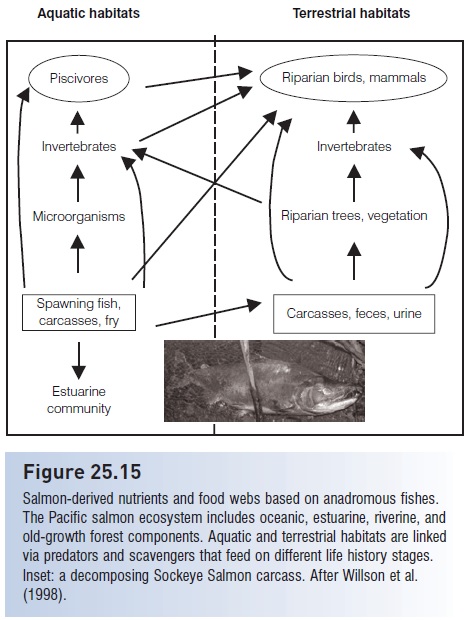 Mammalian piscivores and scavengers include bears, mink, otters, wolverines, wolves, foxes, seals, mice, squirrels, and deer (this does not include eight to 10 riverine fishes that eat eggs and juveniles, numerous stream invertebrates that scavenge salmon carcasses, and a rich community of bacterial and fungal decomposers that recycle salmon-derived nutrients).

It is in the later stages of the spawning migration, and even after the migration, that the major ecosystem impact of spawning adults is felt. Spawning fish, postspawning fish, and spent carcasses floating downstream or decaying in the river and on river banks are crucial to ecosystem processes. As carcasses decompose, they are attacked by microscopic and macroscopic scavengers, releasing carbon, nitrogen, phosphorus, and other nutrients acquired at sea, which leads to significant increases in primary and secondary production. The transfer of energy and nutrients eventually feeds back on the next generation of salmon because of the linkages between ecosystem components (Willson et al. 1998; Schindler et al. 2003). Growth of juvenile salmon is closely linked to the availability of salmon carcasses in a stream (Bilby et al. 1996), in part because young salmon feed on invertebrates that feed on salmon carcasses. But juvenile salmon also benefit because streams with well-developed riparian vegetation provide better salmon habitat for spawning adults and developing fry via temperature-regulating shade, insect inputs, and woody debris inputs that control flow, sediment filtration, and bank stabilization. Young salmon therefore depend on intact headwater streams embedded in old-growth forests, and the health of these forest ecosystems may be greatly influenced by the spawning migrations of adult fish. Bears and eagles that feed on salmon carry carcasses into the woods and also defecate there. These activities release phosphorus, nitrogen, carbon, and micronutrients that originated in the ocean. These marine-derived nutrients are taken up by riparian trees as far as 100 m from a stream (Helfield & Naiman 2001). Sitka spruce, an old-growth species, grows three times faster along salmon-bearing streams, producing the 50 cm trees that are most useful as woody debris inputs almost four times faster than trees along streams without spawning salmon (86 vs. 307 years). Hence, spawning salmon enhance the survivorship of subsequent salmonid generations in many ways besides direct, reproductive activity (Helfield & Naiman 2001).

Although less studied, the potentially important role of fishes in linking different ecosystems is becoming obvious as ecologists focus attention on nonsalmonid migratory species. Nutrients accumulate or are transformed as the result of spawning migrations, metabolic processes, predation, and the death and decomposition of spawning adults of other species, such as clupeids; these inputs can be linked to elevated ammonium concentrations and increased microbial and invertebrate production (Hall 1972; Durbin et al. 1979; Browder & Garman 1994). Alewives, Alosa pseudoharengus, migrate up rivers of the Atlantic coast of the USA to spawn. Juveniles spend their first half year of life in headwater lakes, and such lakes often produce trophy-size Largemouth Bass, Micropterus salmoides (Yako et al. 2000).Herring were the most important fish prey consumed by bass in such lakes, and bass grew better when herring were a diet component. Yako et al. concluded that juvenile herring were an energetically valuable, potentially key prey for Largemouth Bass. MacAvoy et al. (2000) similarly concluded that anadromous fish such as Blueback Herring, shad, and Alewife may be a significant source of nutrients to freshwater apex predators in tidal and freshwater regions. Garman and Macko (1998) used stable isotope analyses to investigate whether migrating clupeids (Alosa spp.) provided an important seasonal subsidy to energy and nutrient budgets of coastal waters. They found that predators in coastal streams derived a substantial proportion of their biomass carbon from marine sources during clupeid spawning runs.

Other reproductive migrations and life cycles may be equally important in transferring nutrients and energy between ecosystems. Catadromous fish migrations by eels and mullet export organic matter and nutrients to nearshore and offshore ecosystem components. Best studied are some fishes that utilize estuaries as part of a complex life cycle (Ray 2005). Gulf Menhaden (Brevoortia patronus) are the numerically dominant fish species in estuaries throughout the Gulf of Mexico (Deegan 1993). These fish spawn offshore in December and January, enter estuaries as larvae in February, spend about 9 months feeding and growing in the estuary, and then migrate offshore in the fall as juveniles, having increased in body mass 80-fold (from 0.15 to 13 g) over that time. Their emigration represents a net export of energy, carbon, nitrogen and phosphorus from the estuary, totaling 930 kJ energy, 38 g biomass, 22 g carbon, 3 g nitrogen, and 1 g phosphorus for every square meter of estuary.

Such calculations indicate that between 5% and 10% of the primary productivity of the Louisiana saltmarshes is exported in the form of emigrating Menhaden. Menhaden may transport half of the nitrogen and phosphorus that leaves these estuaries, the remaining half leaving passively in tidal currents in the form of detritus and dissolved substances. However, the high lipid and protein content of clupeids makes these nutrients much more available to offshore food chains than is the case for the nitrogen, phosphorus, and carbon tied up in detritus. In fact, the estuary’s loss is the nearshore environment’s gain, as Menhaden are the major prey of many predatory fishes. The carbon contained in Menhaden represents 25–50% of offshore production (Madden et al. 1988). Many other species of fishes, particularly various croakers, have life histories that include larval growth in estuaries followed by offshore migration of juveniles or adults (see Fig. 9.11).

Hence fishes link inshore and offshore ecosystems via their role in the exchange of energy, matter, and nutrients. Additionally, nutrient cycles and food webs are seldom limited to the particular habitat in which we find a species at any given moment. Ecosystems are connected to and intimately dependent on one another. 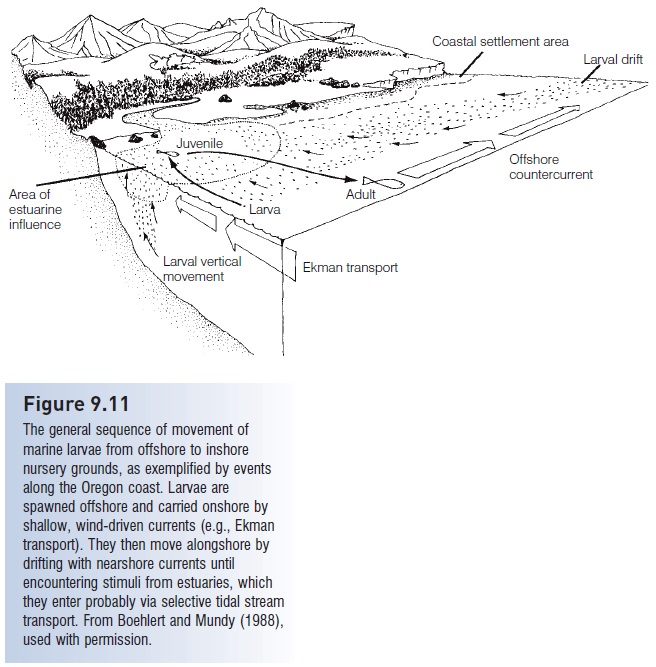 This complex interconnectedness of offshore, nearshore, and upstream habitats underscores the importance of an ecosystem perspective when managing fisheries or planning habitat-disturbing human activities. Because of the function of salmon and other migratory species (e.g., lampreys, sturgeons, clupeids, smelt, char, Striped Bass) as connectors and enhancers of ecosystems, Willson et al. (1998) referred to them as cornerstone species that provide a resource base that supports coastal and inland ecosystems. Overfishing, habitat destruction, or migration blockage due to dams erodes and eventually removes this cornerstone, which slows tree growth, produces shorter trees, reduces woody inputs, degrades riverine habitat, and eventually accelerates the decline of species important to humans. “The links between ocean and land mean that management of an ocean fishery can have far-reaching effects on distant ecosystems, and vice versa” (Gende et al. 2002, p. 924).