Effects of fishes on benthic invertebrates

Populations of benthic invertebrates in streams appear to be minimally influenced by predatory fishes, although results vary in different habitats .

Populations of benthic invertebrates in streams appear to be minimally influenced by predatory fishes, although results vary in different habitats . In Colorado, Brook Trout (Salvelinus fontinalis) were removed from a 1 km section of a stream. Invertebrate numbers and species composition were compared over 4 years in the removal section and in control sections both up- and downstream. No significant differences arose in experimental versus control sections, indicating that trout predation had little effect on invertebrate community dynamics. Similar results, involving fish removal or cages that excluded fish, have been found in streams in North Carolina, Kentucky, Czechoslovakia, England, and in ponds in New York and South Carolina (Allan 1982, 1983; Holomuzki & Stevenson 1992). In contrast, benthic invertebrate numbers were significantly depressed by the activities of Bluegill in lakes and by Creek Chub (Semotilus atromaculatus) in streams. Midges and stonefl ies declined in direct proportion to sculpin and dace abundance in one study, but midges were unaffected in another. Bluegill Sunfish can also reduce invertebrate biomass and density of pond invertebrates, and Yellow Perch as an introduced species can eliminate 50% of the benthic invertebrate biomass of small lakes. Bottom type, topographic complexity, and current strength all influence the outcome. Predation in many of these experiments was size selective, with fish preferentially eating larger individuals and species and hence affecting community composition as well as numbers (Crowder & Cooper 1982; Mittelbach 1988; Northcote 1988; Gilliam et al. 1989; Allan & Castillo 2007).

Predators can affect more than absolute and relative prey numbers. Distributional changes arise as a result of behavioral adjustments to the threat of predation, which can have population consequences for prey. In the presence of predatory fishes such as sculpins, insect larvae such as mayfl ies avoid the surfaces of rocks where food availability is highest and instead are found under rocks (Kohler & McPeek 1989; Culp et al. 1991). When Smallmouth Bass (Micropterus dolomieu) are present, crayfish reduce both locomotory and foraging activities and select bottom types that provide more protection (Stein 1977). Drift, the movement of invertebrate larvae and adults downstream in the water column of lotic systems (streams and rivers), is also affected by fish activity. In the presence of Longnose Dace, Rhinichthys cataractae, mayfly drift first increases and then decreases compared with situations when predators are absent. Hence invertebrates may first move out of an area where predators occur and then later settle and take refuge. Amphipods respond to sculpin by reducing general activity, including drift (Andersson et al. 1986; Culp et al. 1991). Cooper (1984) showed that predation by trout can have both negative and positive effects on water striders. By preying on water striders, trout increase intraspecific competition by increasing the relative density of striders in refuges away from predation risk. However, trout predation benefits water striders in that trout prey on both competitors and predators of the water striders.

Disagreements about the responses of benthic invertebrates to fish predation may reflect differences in prey mobility in different areas (Cooper et al. 1990). In streams containing highly mobile or drifting prey, or in cage studies where mesh size is large enough to allow invertebrates to recolonize, prey that are eliminated by predators will be replaced by immigration. Where minimal exchange of prey occurs between habitats, or where cage mesh sizes are too small to allow recolonization, predators have a stronger depressing effect on prey populations. Not surprisingly then, drift-feeding fishes (e.g., salmonids) have lesser effects on prey, whereas benthic-feeding fishes (e.g., some minnows, sculpins, sunfishes) tend to reduce prey populations. Lakes, ponds, and pool communities with their reduced flow regimes will be more affected by predation than will be riffl es and runs. Current speed in lotic systems will operate analogously, fast currents serving to transport immigrants and slow currents tending to delay replacement. Predatory fishes therefore play different roles depending on whether the habitat is relatively open or closed.

The apparent minimal effect that fishes have on stream invertebrate populations may be interpreted as a lack of influence of fishes on their prey. However, the flip side of this situation is that stream fishes are therefore unlikely to limit their own food supply and are thus unlikely to find themselves competing for food. Insect abundance does, however, vary significantly and can be limiting. Seasonal cycles of insect abundance, driven by insect life histories more than by fish predation, include a midsummer low after many adults have emerged from the stream and before the next cohort of prey has reached edible size. Growth rates of fishes decrease during this midsummer period. Experimental additions of food to streams during midsummer can increase growth, survival, and energy stores of juvenile stream fishes, indicating that food was in fact limiting (Mason 1976; Schlosser 1982; Karr et al. 1992).

Fishes can also affect the numbers, species composition, and distribution of sessile and mobile marine invertebrates.

Some corals appear to be restricted to shallow water habitats by the grazing activity of fishes. Triggerfish (Balistapus undulatus) occur on reef slopes and deep reef areas and eat corals such as Pocillopora damicornis. Pocillopora can be successfully transplanted to deeper water on reefs if placed in cages that exclude the triggerfish. Corals transplanted outside of cages are consumed (Neudecker 1979). Damselfish actively kill corals within their territories, which creates a growth surface for the algae on which the fish feed (Kaufman 1977). Since damselfish territories can cover a significant proportion of some shallow reefs, habitat modification by damselfish can influence the amount of coral cover. At the same time, damselfish algal turfs are important habitats for small crustaceans, polychaetes, and mollusks, and the territoriality of the damselfish protects these invertebrates from predatory fishes (Lobel 1980). Fish predation can also affect the diversity of encrusting species. Tunicates in caves on the Great Barrier Reef are heavily grazed by fishes. Inside enclosures, tunicates dominate other forms, whereas outside enclosures, removal of tunicates by fishes allows for growth of bryozoans. Tunicates grow successfully only where they have natural protection, such as at the base of stinging hydroids (Day 1985).

Fish predation can limit the distribution of such mobile invertebrates as polychaetes, burrowing sea urchins, snails, stomatopods, and hermit crabs on and near reefs. Predation by stingrays may reduce snail abundance on sandy substrates near reefs. The reef itself often provides a refuge from and for fishes. Herbivorous sea urchins shelter in the reef by day and venture into surrounding grass beds at night. Patch reefs in the Caribbean typically have a denuded ring of sand 2–10 m wide at their base which results from the nocturnal forays of the urchins. The width of this “halo” apparently reflects the distance that urchins can move from the reef and still return safely at dawn before diurnal predaceous fishes become active. The region around the reef, including the halo, is also relatively devoid of infaunal invertebrates. Invertebrate-feeding fishes venture off the reef and forage in the reef ’s vicinity, returning to the reef when threatened by predators and when resting. Invertebrate densities increase as one travels farther from the reef, unless another reef is close enough that the foraging regions of fishes from both reefs overlap (Ogden 1974; Randall 1974; Ambrose & Anderson 1990; Jones et al. 1991; Posey & Ambrose 1994).

Similar, dramatic fish–urchin–algae interactions have also been observed at high latitudes. In the Bering Sea, expansion of the Walleye Pollock fishery occurred concurrently with large declines among Steller sea lions, northern fur seals, and harbor seals (Goñi 1998). Reductions in pinnipeds have apparently caused orcas to feed on sea otters as alternative prey, thus releasing sea urchins from predation by the otters, and culminating in a loss of kelp forests because of overgrazing by the urchins (Estes et al. 1998). Many nearshore, high-latitude marine fishes are dependent on kelp forests as habitat (Stephens et al. 2006). 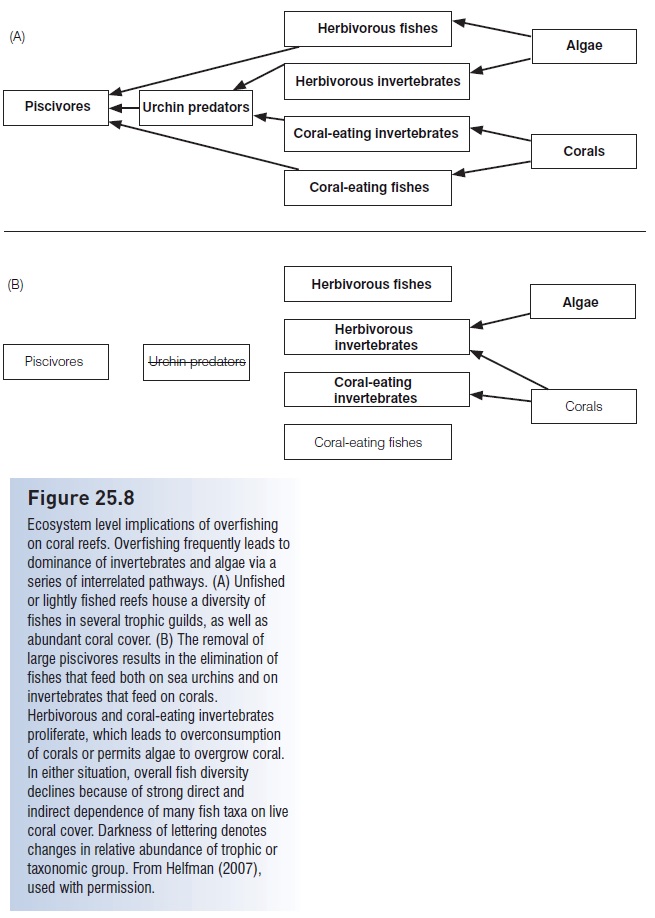 Ecosystem level implications of overfishing on coral reefs. Overfishing frequently leads to dominance of invertebrates and algae via a series of interrelated pathways. (A) Unfished or lightly fished reefs house a diversity of fishes in several trophic guilds, as well as abundant coral cover. (B) The removal of large piscivores results in the elimination of fishes that feed both on sea urchins and on invertebrates that feed on corals. Herbivorous and coral-eating invertebrates proliferate, which leads to overconsumption of corals or permits algae to overgrow coral. In either situation, overall fish diversity declines because of strong direct and indirect dependence of many fish taxa on live coral cover. Darkness of lettering denotes changes in relative abundance of trophic or taxonomic group. From Helfman (2007), used with permission