Indirect effects and trophic cascades - Fishes in the ecosystem

The impact of fish predation on both plants and animals extends beyond the direct effects of reduction in biomass and shifts in species and size composition.

The impact of fish predation on both plants and animals extends beyond the direct effects of reduction in biomass and shifts in species and size composition. Indirect effects on other components of the food web have received considerable attention in recent years. Only about half of the variation in annual primary production in lakes can be explained by changes in the amounts and types of nutrients that occur there. The other half results from the indirect but important role that fishes, both piscivores and zooplanktivores, play in determining plant production in lakes. This effect can be described as a cascade of influences down through the food web of a lake from secondary consumers to primary producers (Fig. 25.10). A typical trophic cascade involves piscivorous fishes (salmons, Pike, basses) feeding on zooplanktivorous fishes (herrings, minnows), which feed on herbivorous zooplankton, which eat phytoplankton. Increasing the number of piscivores reduces the number of zooplanktivores, which increases zooplankton abundance, which leads to more removal of phytoplankton from the water column. Hence experimental additions of top predators lead to greater water clarity. The previously mentioned increase in average size of zooplankton due to size-selective feeding of fishes occurs as an incidental result of such a manipulation. Fish predators on zooplankton are reduced, favoring larger zooplankton that would otherwise be taken by fishes and that may be too large for invertebrate predators to handle. A reversed chain of events occurs if piscivore abundance is reduced, either experimentally, through overfishing, or from fish kills such as occur during winter deoxygenation. Fewer piscivores mean more phytoplankton because of the reduction in herbivorous zooplankters. In reality, herbivorous zooplankton are never entirely eliminated(Carpenter et al. 1985; Carpenter & Kitchell 1988,1993; Kufel et al. 1997).

Trophic cascades are not limited to the open water communities of lakes. Benthic communities in shallow water may also be structured by fish-mediated cascades. A fish– snail–epiphyte–macrophyte cascade was found in a Tennessee lake where Redear Sunfish (Lepomis microlophus) ate snails that grazed on epiphytes (filamentous blue-greens and diatoms), which normally infest lake weeds (Martin et al. 1992). When fish were excluded, snail abundance increased, snails depressed the epiphyte populations, and macrophyte growth increased. Strong trophic cascades similar to those found in lakes can also develop in lotic ecosystems. During the summer, low-flow conditions create a series of pools in seasonally flowing rivers.

Trophic cascades. (A) The various components of a trophic cascade as postulated for a lake or pond over a growing season. Solid lines represent changes in biomass or density resulting from a strong year class or the experimental addition of piscivores; dashed lines show the effects of winterkill or overfishing of piscivores. In North America, piscivores would include salmonids, Pike, black basses, and Walleye; vertebrate planktivores would include herrings, minnows, whitefishes, Bluegill, and Perch; invertebrate planktivores would be copepods and many insect larvae; and most herbivores are crustacean zooplankton. (B) An actual trophic cascade. This is the one producing the outcome in the Eel River, California, depicted in Fig. 25.11. See text for explanation. (A) from Carpenter et al. (1985), used with permission; (B) after Allan and Castillo (2007).

In the Eel River, California, turfs of filamentous algae up to several meters long and covered with diatoms and blue-green alga ecover most of the bottom (Fig. 25.11). Through the summer, these turfs are grazed down to small tufts by midges. The midges are the major prey of predatory damselfly nymphs and the fry of California Roach (Hesperoleucas symmetricus) and Three-spined Stickleback (Gasterosteus aculeatus). Fish fry and damselfly nymphs are in turn eaten intensively by large roach and Steelhead Trout (Oncorhynchus mykiss). When algae are allowed to grow in cages that exclude the trout and large Roach, fry and damselfly nymphs abound, cropping down the midges. This allows the algae to maintain fairly luxuriant growth through the summer. Hence the feeding activities of predaceous fishes cascade down through the food web and eventually determine the growth form and extent of primary producers in the river (Power 1990).

Trophic cascades in rivers mediated by fish. (A) During early summertime low flow conditions, filamentous algae develop long turfs on cobble bottoms. (B) By late summer, midges have consumed most of the algae and woven the remainder into small tufts. These midges are eaten by invertebrates and fish fry, which are in turn consumed by larger fish. When large fish are excluded, predators on the midges abound, the midges decline in numbers, and the algae reach abundances more like (A) than (B). Hence algal abundance is determined indirectly by the activities of large predatory fishes. From Power (1990), used with permission.

CaCO3 is less soluble at high pH and thus precipitates out of the water, causing the milkiness. Intensive stocking of salmonids (Coho and Chinook salmon, Lake, Rainbow, and Brown trout) in Lake Michigan during the 1970s led to high salmonid populations in 1983. Salmonids ate huge numbers of zooplanktivorous Alewives, allowing phytoplanktivorous cladocerans to develop large populations, which in turn ate phytoplankton. Lack of phytoplankton kept the pH low and hence no whiting event occurred that year (Stewart et al. 1981; Vanderploeg et al. 1987).Another physical result of trophic cascades involving fishes is the effect that plankton biomass has on temperatures, thermocline placement, and seasonal mixing depths in a lake. Lakes typically have an upper epilimnetic region of warmer water, a lower hypolimneticregion of cold water, and an intermediate metalimnion or thermocline where temperatures change from warm to cold. In experimental enclosures and small (<20 km2) lakes that lack zooplanktivorous fishes (and hence have zooplankton that remove phytoplankton), water is clearer, temperatures are 3–13°C higher in the metalimnion, and the greater penetration of light and heat leads to deeper thermoclines and a deeper mixed layer of epilimnetic water. Hence the heat content of a lake and all the biological and physical processes and interactions dependent on that heat may be strongly influenced by the top-down effects of fish predation(Mazumder et al. 1990).

Trophic cascades do not have to be unidirectional, e.g., either top-down or bottom-up. Flecker et al. (2002) added nitrogen and excluded grazing fishes from Andean streams. They found that excluding fishes had the strongest impact on algal biomass and composition, but that algae responded more strongly to nutrient addition when exposed to grazing fishes. Hence fishes affect primary producers directly through consumption and indirectly by infl uencing their response to nutrient availability, thus producing both topdown and bottom-up processes.

All of the above examples deal with relatively small- and medium-scale ecosystems involving a few species set in relatively simple food webs. We now know that large, complex, diverse oceanic systems are also driven by bottomup and top-down, cascading trophic interactions, and that human disruption of cascades in the form of global warming or overfishing can have far-reaching consequences. In the Northeast Pacific, the abundance and catches of valuable, predatory fish species is closely linked to a trophic cascade involving planktivorous fishes, zooplankton, and phytoplankton productivity. Phytoplankton production declines when warm water masses push into northern Pacific regions, eventually resulting in reduced fish yields (Ware & Thomson 2005). In the North Atlantic, accelerated overfishing of groundfishes (especially Atlantic Cod, but also Haddock, White and Silver Hake, Pollock, Redfish, and flatfishes) occurred in the 1980s and 1990s; these species were the top predators in the benthic and near-benthic communities. Cod stocks were reduced by more than 90%. The removal of these top predators had effects across five trophic levels (Frank et al. 2005). Small pelagic fishes and benthic invertebrates – the primary prey of the top carnivores – increased markedly. Their prey, large-bodied herbivorous zooplankton, decreased. In response, phytoplankton, chlorophyll levels, and nitrate concentrations increased.

Disruption of the trophic cascade has apparently affected ecological interactions within the North Atlantic food web, to the detriment of the ecosystem and its utility to humans. Altered conditions, especially the removal of the top predators, helped to release dogfish and skates from predation by and competition with groundfish species. As (desirable)

groundfish decreased through the latter 20th century, (less desirable) skate and dogfish increased (Anderson et al. 1999; Reynolds & Jennings 2000) (Fig. 25.12). Unfortunately, the dogfish and skate increases may be irreversible. Despite bans on fishing, cod are not rebounding (Hutchings & Reynolds 2004; Olsen et al. 2004). The upsurge in their former prey may have turned the tables because these benthic, intermediate- level carnivores are predators on the young of the formerly abundant, top-level predators (although stomach contents analysis indicates that groundfish are uncommon food items of the elasmobranches; Link et al. 2002). Regardless, the prognosis for a rebounding cod fishery is not promising: “the time required for population recovery in many marine fishes appears to be considerably longer than previously believed” (Hutchings 2000a, p. 885). 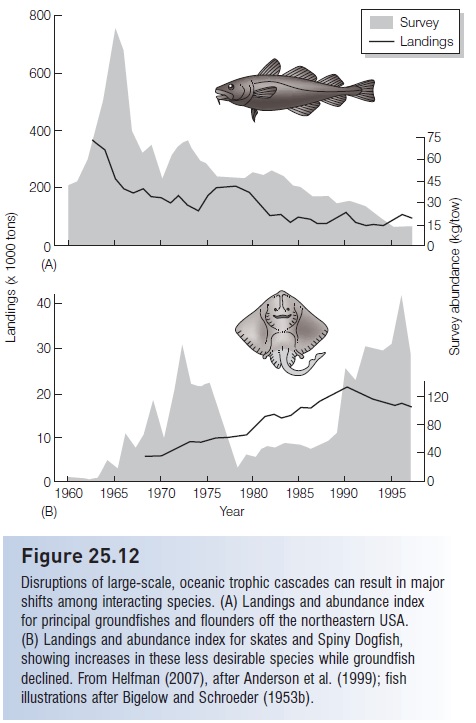 Disruptions of large-scale, oceanic trophic cascades can result in major shifts among interacting species. (A) Landings and abundance index for principal groundfishes and flounders off the northeastern USA. (B) Landings and abundance index for skates and Spiny Dogfish, showing increases in these less desirable species while groundfish declined. From Helfman (2007), after Anderson et al. (1999); fish illustrations after Bigelow and Schroeder (1953b).

Trophic cascades are of interest beyond the insight they give us into the function of aquatic ecosystems. They have been directly applied to problems associated witheutrophication in lakes, where excessive nutrient input such as from fertilizers leads to blooms of undesirable phytoplankton (Kitchell 1992; Carpenter & Kitchell 1993). Primary production and turbidity can be reduced by stocking piscivores that eat zooplanktivores or by selectively removing zooplanktivorous fishes. Both practices have the same theoretical result at the end of the trophic cascade: fewer zooplanktivores mean more zooplankton, which means more consumption of phytoplankton and clearer water, assuming that planktivores are not too big to eat and that phytoplankters are edible.

Direct application also occurs in the context of marine protected areas (MPAs) on coral reefs. MPAs are created in part to restore large predators, such as groupers. A potential negative outcome of increased predator biomass could be reduced prey numbers, which could be problematic if the prey were herbivores such as parrotfishes that consumed benthic algae that competed with corals for space. However, actual measurements of parrotfish numbers and algal biomass in successful reserves indicates that, despite increases among large predators, parrotfish also increase in size and number. This leads to a doubling of grazing and a four-fold reduction in macroalgal cover, which “highlights the potential importance of reserves for coral reef resilience” (Mumby et al. 2006) (Fig. 25.13). 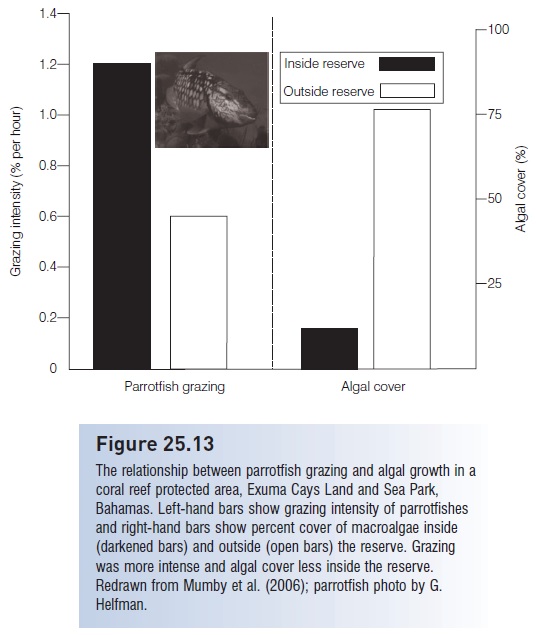 Finally, failing to understand how trophic cascades function can lead to misapplications and unintended consequences (Fig. 25.14). Concern over shark attacks along South African beaches led to an extensive gill netting effort targeted at large sharks. This netting effort was very successful and reduced shark attack frequency, but had a deleterious, cascade effect on sportfishes. Large sharks are predators on smaller sharks, and smaller sharks compete with humans for sportfishes. Hence by reducing the abundance of large predatory sharks, smaller shark species and the young of large sharks experienced a population boom, which in turn strongly depressed the abundance of finfishes in the region (Van der Elst 1979).