·              The essential mechanism of action of all NMBs is inhibition of the effects of acetylcholine (ACH) on nicotinic receptors at the neuromuscular junction (NMJ).

·              The depolarising NMBs (or DNMBs) such as succinyl- choline (suxamethonium) produce muscle depolarisation in the same way as ACH. The action of succinylcholine is prolonged because it is relatively resistant to hydrolysis by true acetylcholinesterase.

·              The nondepolarising NMBs (or NDNMBs) act by competi- tive inhibition of ACH at nicotinic receptors, and their action is in general of shorter duration.

·              Succinylcholine is rapidly hydrolysed by plasma pseudocho- linesterase to an intermediate metabolite succinylmonocho- line. This metabolite is weaker in action than succinylcholine, but because of its slower rate of hydrolysis may accumulate and cause prolonged paralysis of the patient.

·              Succinylmonocholine is hydrolysed to succinic acid and choline, neither of which has pharmacologic action.

·              Therapeutic doses produce the following sequence of skel- etal muscle depression: heaviness to the eyelids, difficulty in swallowing and talking, diplopia, progressive weakness of the extremities, the neck, trunk, spine, intercostals, and diaphragm. The paralysis recedes in the reverse.

·              Cardiovascular collapse preceded by tachy- or bradycardia, and hypo- or hypertension. Gallamine has a shorter dura- tion of action than tubocurarine and, due to its blocking of the cardiac vagus, it may cause sinus tachycardia and, occasionally, arrhythmias and hypertension.

·              Hyperkalaemia (with succinylcholine): The potassium may originate from skeletal muscle, released by depolarisation at the neuromuscular junction or from damaged muscle fibres caused by incoordinate contractions The rise in potas- sium usually occurs 3 to 5 minutes after IV administration of succinylcholine, and is usually 0.5 to 1 mmol/L. The increase usually lasts less than 10 to 15 minutes.

·              Malignant hyperthermia: Malignant hyperthermia (MH) is a rare, genetically influenced, potentially lethal complica- tion associated with the use of inhalational anaesthetics, amino-amide local anaesthetics, and some muscle relaxants (succinylcholine, decamethonium, d-tubocurarine, and gallamine). It can also be precipitated in susceptible indi- viduals by stress, hot environment, emotional excitement, physical exertion, and infection. The genetic susceptibility to MH is due to a mutation of the ryanodine receptor gene located in the region of 12–13.2 of chromosome 19. This is responsible for decreased calcium uptake by the sarcoplasmic reticulum of muscle cells leading to increase in myoplasmic calcium, which is triggered by a nmber of agents. A number of aerobic and anaerobic metabolic processes are set in motion resulting in excessive heat and CO2 and lactic acid production. Indications of MH during anaesthesia include the following:

·     Persistent weakness (especially in critically ill patients subjected to prolonged ventilation) referred to as ICUneuromuscular syndrome. Recovery may take upto 6months. Precautionary measures are necessary to minimise the possibility of this distressing complication. 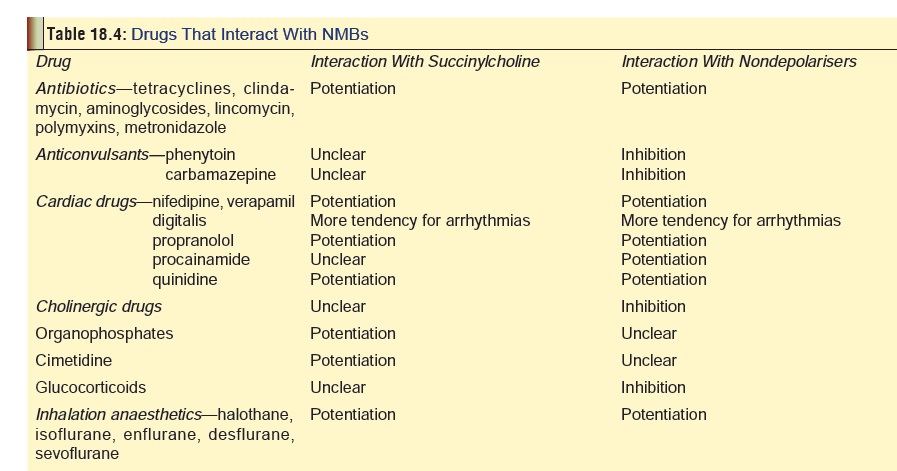 ·      Succinylcholine (succinyldicholine, diacetylcholine, or suxamethonium) is a bis-quaternary ammonium ion composed of two acetylcholine molecules connected by their acetate groups. The dose necessary to produce neuromuscular blockade and respiratory paralysis in adults ranges from 0.3 to 1.1 mg/kg in adults (mean 0.6 mg/kg). Succinylcholine use is sometimes associated with prolonged apnoea which may be due to genetically determined atypical pseudocholinesterase (incidence 1 : 2500), or due to exposure to cholinesterase inhibitors such as organophosphates.

Duchenne’s muscular dystrophy), acute rhabdomyol-ysis, severe hyperkalaemia, and cardiac arrest can occur, and hence it is advisable not to use succinylcholine in the paediatric age group (particularly boys under the age of 8 years) except for emergency intubation.

o     Succinylcholine is also well known for causing anaphy-laxis in susceptible individuals (mostly women) which manifests as rapid circulatory collapse without other conventional signs such as skin rash or wheezing.

·      Tubocurarine and all other curariform blocking agents are derived from curare (Fig 18.3), a large vine, found in the canopy of the South American rainforest. Overdose causes complete skeletal muscle paralysis without affecting consciousness. Initially the small muscles of the eyes, ears, fingers, and toes are paralysed, followed by face and neck, upper and lower limbs, and finally the diaphragm and inter-costal muscles, leading to respiratory failure. 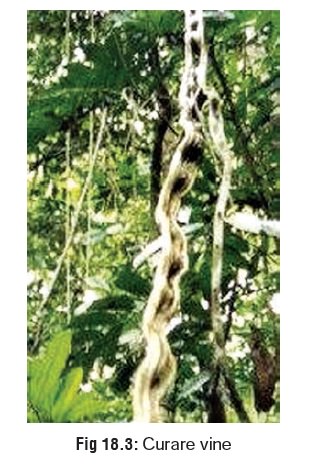 o     Metocurine produced by methylation of tubo­curarine is twice as potent while doxacurium is a long-acting NMB without histamine-releasing effects. Unlike the others, it is metabolised rapidly at first to laudanosine, and later to an acrylate moiety both of which do not possess NMB property.

o     cis-Atracurium is a purified atracurium isomer which is much more potent, and unlike its parent compound is not associated with histamine release.

o     Mivacurium is a short-acting drug composed of a mixture of 3 stereo-isomers, but may sometimes cause prolonged block.

o     Pancuronium is a synthetic bis-quaternary aminosteroid which has a selective cardiac antimuscarinic (atropine-like) action resulting in increased heart rate and blood pressure. It is partly metabolised and undergoes some degree of deacetylation in the liver, which is responsible for prolonged effects in the presence of hepatic insuf-ficiency.

o     Vecuronium is a derivative of pancuronium with similar potency, but is less prone to induce tachycardia and hypertension.

o     Pipecuronium is a long-acting analogue producing a block of long duration.

o     Rocuronium is known for its rapid onset of action and does not produce histamine release or significant cardiac effects.

·            Overdose with depolarising agents such as succinylcho-line cannot be reversed pharmacologically, and must be managed with prolonged assisted ventilation.

o     Give dantrolene sodium 2 to 3 mg/kg IV bolus, followed by increments upto a maximum of 10 mg/kg. Stop dantrolene when the signs of MH are controlled, and administer it subsequently at 1 mg/ kg IV 6th hourly for 1 to 2 days, and then the same dose orally for 1 more day.

o     Give sodium bicarbonate to correct metabolic acidosis (1 to 2 mEq/kg).

Lavage of stomach, bladder and rectum with iced saline.

o     Treat persistent arrhythmias with standard anti-arrhythmic drugs (except calcium channel blockers which can cause or aggravate hyperkalaemia).

·            For rhabdomyolysis: Early aggressive fluid replacement is the mainstay of therapy and may help prevent renal insufficiency. Diuretics such as mannitol or furosemide may be needed to maintain urine output. Urinary alka-linisation is NOT routinely recommended.

·             In patients with renal failure, haemodialysis may be effec-tive in reversing prolonged neuromuscular blockade due to tubocurarine or pancuronium. However, dialysis will not be effective for overdose of atracurium or vecuronium since these agents are not renally excreted.