Cocaine and Other Local Anaesthetics

Cocaine is present in the leaves of the coca plant (Erythroxyloncoca) and is an ester of benzoic acid and methylecgonine.

·              Cocaine is present in the leaves of the coca plant (Erythroxyloncoca) and is an ester of benzoic acid and methylecgonine.Local anaesthetic effect is due to blockade of nerve impulses. It also has local vasoconstrictive effect secondary to inhibition of norepinephrine re-uptake. Cocaine hydrochloride is used as a 1%, 4%, or 10% solution for topical application. Its use is greatly restricted because of its toxicity and abuse potential. Cocaine is mainly used as a local anaesthetic for the upper respiratory tract.

·              A third group of miscellaneous agents include diperidon, dyclonine, and pramoxine.

·              The most commonly used local anaesthetics are lignocaine and bupivacaine. A mixture of lignocaine (500 to 1000 mg/L), adrenaline (0.25 to 1 mg/L) and sodium bicarbonate (12.5 mmol/L) in 0.9% saline is usually infused into the surgical site for local anaesthesia, and to minimise blood loss during tumes-cent liposuction. Doses of lignocaine during this procedure can reach 55 mg/kg. Death can result from severe bradycardia and hypotension during such a procedure.

·              Local anaesthetics produce a conduction block at the cell membrane of the involved nerve. All nerves (sensory, motor, and autonomic) are affected, but small diameter pain/temperature (AS fibres) and autonomic ones (B and C fibres) are most susceptible. This conduction block is eventually reversible and is produced by a transient increasein sodium permeability, which would normally produce the action potential and permit its propagation.

·              Anaesthetics prevent the increase of sodium pump perme- ability which occurs during normal impulse transmission. They also interfere with permeability of potassium in the resting nerve. The permeability of both sodium and potas- sium are calcium dependant and it is believed that local anaesthetics compete with calcium for membrane binding sites.

·              Local anaesthetics are absorbed from mucosal surfaces as well as from parenteral sites. They are rapidly absorbed from the GI tract with peak plasma levels occurring within 30 to 60 minutes.

·     Agents of the ester type are rapidly metabolized mainly in the plasma by pseudocholinesterases yielding para— aminobenzoic acid derivatives. They are also metabolised to a small degree by liver esterases. Agents with an amide linkage are metabolised by hepatic microsomal enzymes.

·     Metabolites of both types of compounds are excreted in the urine. Only small amounts of parent drug are excreted unchanged.

·              Toxicity is due to an exaggerated pharmacological activity, primarily involving the cardiovascular and central nervous systems. High drug levels result in depressed membrane func-tion of all excitable tissues eventually resulting in membrane instability.

o     Local Effects—Accidental subarachnoid injection of chloroprocaine may cause adhesive arachnoiditis or cauda equina syndrome. Intravenous use is associated with venous thrombosis.

·              Systemic Toxicity: Toxicity may occur after ingestion, topical use, or parenteral administration. It may result from an excessive dose, mistaken drug identity, enhanced

o     CNS effects invariably precede significant cardiovas-cular toxicity, except following massive IV injection. Subjective effects after therapeutic doses or in mild toxicity include drowsiness, impending doom, head-ache, dizziness, paraesthesias, euphoria, numbness of the mouth, light-headedness, tinnitus, anxiety, confu-sion, tremors, agitation, disorientation, hallucinations and lethargy. While there is often a progression of symptoms after IM, SC, or continuous IV infusion, seizures and coma may occur suddenly after rapid IV administration. Most of the local anaesthetics are anti-convulsants at low doses and convulsants at high doses. Seizures can occur regardless of route of administration, though they are more common with IV use.

o     Lignocaine IV may cause sudden apnoea and asystole.

o     Bupivacaine is known to cause QRS prolongation even with proper administration of therapeutic dose. It is more cardiotoxic than lignocaine.

o     Prilocaine can cause methaemoglobinaemia since it is an aniline derivative.

o     Structurally different from the benzoate esters or the amides, pramoxine is reported to have relatively “low systemic toxicity”. It also does not cause sensitisation as frequently as benzocaine, yet is an equally effective anaesthetic.

o     Exposure to prilocaine, benzocaine, lignocaine, tetracaine, or cetacaine may result in methaemoglo-binaemia. The aetiology is metabolism to o-toluidine and 4-hydroxy-2- methylaniline, both known methae-moglobin inducers.

o     Local anaesthetics readily cross the placenta. Foetal or neonatal poisoning may occur as a result of spinal or regional nerve blocks, systemic maternal poisoning, or inadvertent intracranial injection of local anaesthetics into the foetus during labour and delivery. Bupivacaine is contraindicated in obstetrical paracervical block anaesthesia. Use of bupivacaine in obstetrical paracer-vical block has resulted in foetal bradycardia and death.

The minimum IV toxic doses of some local anaesthetics are listed in Table 18.1. The single dose limit for lignocaine is 2 mg/kg for IV doses and 3 to 4.5 mg/kg for infiltration, nerve block, or regional anaesthesia. When administered with adrenaline for local anaesthesia, the total dose should not exceed 7 mg/kg. Fatalities can occur upon intravascular injection of therapeutic (infiltration/nerve block) doses. 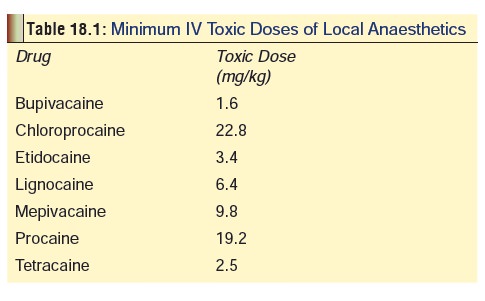 ·      Treat convulsions with thiopentone IV (50 to 100 mg), diazepam (10 mg), or midazolam (2 mg). Attempt initial control with a benzodiazepine. If seizures persist or recur administer barbiturates. Phenytoin may worsen cardiac arrhythmias and should be avoided.

·      Methaemoglobinaemia resulting from lignocaine and prilo-caine can be treated with methylene blue (1 to 2 mg/kg/dose or 0.1 to 0.2 ml/kg/dose IV over 5 minutes as needed every 4 hours).

·      Haemodialysis, exchange transfusion, AV haemofiltration and forced diuresis have not been shown to substantially increase clearance. Urinary acidification is not recom-mended. Although acidification of the urine will enhance the excretion of local anaesthetics, the contribution to overall elimination is small, and the risk of such therapy outweighs the benefit.

·              In contrast to earlier years, anaesthesia is asociated with low mortality today and is estimated to be just 1 in 10,000 with proper care in administration. 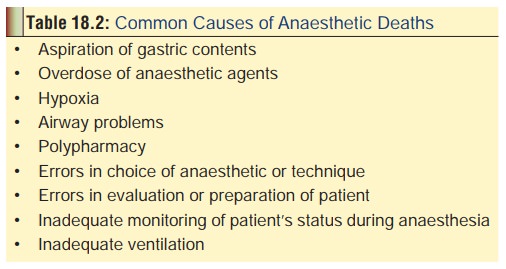 ·              Pregnancy is not associated with significant enhancement of mortality. However some studies suggests an increased risk for congenital anomalies (hydrocephalus and eye defects) in babies born to mothers who had been administred general anaesthetics in the first trimester.

·              There is evidence to suggest that operating room workers may suffer from the results of occupational exposure to general (inhalational) anaesthetics if precautions are not taken – proper connection of scavenging equipment, turning the gas off when breathing system is discon- nected from patient, and use of properly fitting masks on patients.

·              Anaesthetic agents are not uncommonly employed for suicide. Homicides are rare.

·              anaesthesia personnel in the Western countries, while similar data are not available in the Indian context.

·              Common agents abused include alcohol, narcotic drugs, barbiturates, tranquillisers, and nitrous oxide. Halothane and ketamine are also being increasingly abused. Even topical ocular anaesthetics may be abused by hospital personnel which may lead to keratitis, corneal damage, and visual loss.

·              Ketamine, as well as fentanyl and its derivatives are known for their abuse potential even among the general population (discussed in earlier sections). Ketamine, like phencyclidine, has become a popular drug of abuse in several Western countries. Users apparently desire the hallucinogenic side effects. Chronic use can result in tolerance requiring increasing dosages of ketamine to produce the same effects. The following long-term adverse effects have been associated with ketamine abuse: flashbacks, hallucinations, attentional dysfunction, memory impairment, tolerance, and a high degree of dependence. Signs and symptoms of ketamine withdrawal may include chills, autonomic arousal, lacrimation, restlessness, visual, olfactory, and tactile hallucinations, nightmares and psycho- logical cravings.

·              Nitrous oxide is used as a propellant gas in food aerosols (i.e. foaming agent for whipped cream). “Whippet” is a slang term for a cylinder or cartridge designed to charge whipped cream dispensers. The term “nanging” has also been used to describe the recreational use of this agent via cartridges of nitrous oxide. Widespread abuse of this agent has been reported in the United States. These cartridges may be commercially available in supermarkets (Australia), adult bookstores, bar supply shops, and by mail order. Individuals abusing this agent may also purchase it in a can of cooking oil preparation or whipping cream, where it is used as a propellant. The can is inverted and sprayed for a short time until no further oil or whipping cream comes out and only the gas is being emitted from the nozzle. The gas is sprayed into a plastic bag and breathed or sniffed directly. Fatalities are usually due to suffocation and a plastic bag may be found near the victim’s head.

·              Propofol is increasingly being used as an intravenous drug of abuse. In one report, several young males employed at health care centers were arrested for erratic driving behaviour and were found to be injecting themselves with propofol. The famous pop star Michael Jackson (Fig 18.2) is alleged to have died due to an overdose of propofol that was being administered to him by his personal physician to help him sleep, since he suffered from severe insomnia. 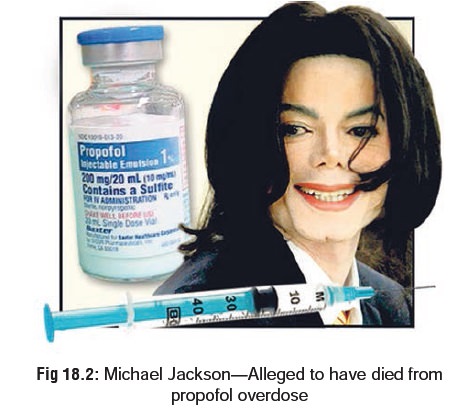 ·              Procaine may produce a stimulant effect, similar to cocaine, when inhaled and is sometimes called “synthetic cocaine”. Powdered procaine is commonly used to “cut” cocaine and has been sold as cocaine when mixed with mannitol or lactose.