·        Determine the intercepts of the plane along the axes X, Y and Z in terms of the Lattice Constant a, b, c.

·        Determine the reciprocals of these numbers.

·        Find the least common denominator (LCD) and multiply each by this lcd. The result is written in the form (hkl) and is called the Miller Indices of the plane. 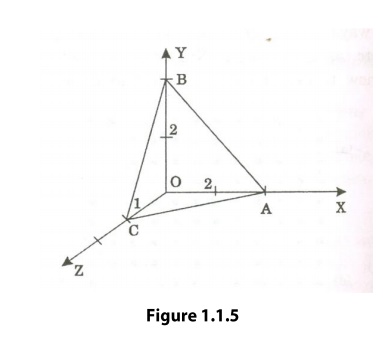 When a plane is parallel to any axis, the intercept of the plane on that axis is infinity. Hence The Miller Indices for that axis zero.

If a plane cuts an axis on the negative side of the origin, corresponding index is negative.

The indices (hkl) do not define a particular plane but a set of parallel planes. Thus the planes whose intercepts are 1, 1, 1;2, 2;-3,-3,-3 etc. are all represented by the same set of Miller Indices.

The Miller Indices should be enclosed only in this bracket.

There should not be any commas in between the numbers.

If the Miller Indices is say (2 6 3) means it should be read as two six three, and not as two hundred and sixty three.

The direction of plane can be represented by enclosing the Miller Indices in a square bracket. For example [2 6 3]

To represent the family of planes we can use this bracket i.e. ->

Putting a bar over the numbers can represent negative Miller Indices For an example (2 6 3) represents the plane with intercepts on negative axis, positive Y-axis and negative Z-axis.