Solids are of classified into two categories based on the arrangement o atoms or molecules.

Solids are of classified into two categories based on the arrangement o atoms or molecules.

A substance is said to be crystalline when the arrangement of the units of the matter inside it is regular or periodic or in an orderly fashion.

The crystalline solids may be classified into two types based on the arrangements of the crystal in the structure.

·        Single Crystal: the entire solid consists of only one crystal.

·        Poly Crystal: it has an aggregate of many small crystals that are separated by well-defined boundaries.

In amorphous solids, there is no order in the arrangement o their constituent particles.

1. They have a definite and regular geometrical shapes which extend throughout the crystal.

3. They have sharp melting point.

4. They are most stable.

1. They do not have definite geometrical shape.

3. They do not have sharp melting point.

Crystal is a regular polyhedral form bounded by surfaces, which is formed by chemical compound under the action of its inter atomic forces, when passing rom the state of the liquid (or) gas to that of a solid, under suitable conditions.

The phase change from liquid (or) gas to solid is called Crystallization.

The crystal structure gives the arrangement of the atoms with in a crystal.

Lattice is defined as an array of points which are imaginarily kept to represent the position of atoms in the crystal that every lattice point has got the same environment as that o the other and hence one lattice point cannot be distinguished from the other lattice point.

Space Lattice or Crystal Lattice is a three dimensional collection of points in space. The environment about any particular point is in everyway the same.

The regular pattern of points which describe the three dimensional arrangement of particles in a crystal structure is called the Crystal Lattice or Space lattice.

Basis is formed by associating with every lattice point a uint of assembly of atoms or molecules identical in composition. This unit assembly is called Basis.

The Crystal Structure is formed by the addition of a basis to every lattice point.

Unit Cell is defined as the smallest geometric figure or pattern, the repetition of which gives the actual crystal structure. This is also defined as undamental elementary pattern o minimum of atoms or molecules or groups of molecules, which represents total characteristics of the material or the crystal. 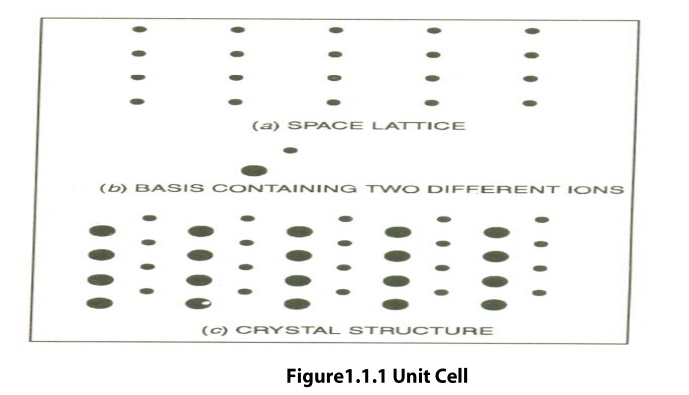