Parental behavior profoundly influences children’s behavior. Parents who engage in risky behaviors such as smoking, drinking, and ignoring their health are more likely to have children who also engage in risky behaviors, including early unprotected sex. Group-based parenting classes are effective to deal with problem behaviors in children and to prevent later development of conduct disorders (Turner & Sanders, 2006).

The SNAP-IV teacher and parent rating scale (Swanson, 2000) is an assessment tool that can be used for initial evaluation in many areas of concern such as ADHD, oppo-sitional defiant disorder (ODD), conduct disorder, and depression. Such tools can identify problems or potential problems that signal a need for further evalua-tion and follow-up. Early detection and successful inter-vention are often the key to mental health promotion. 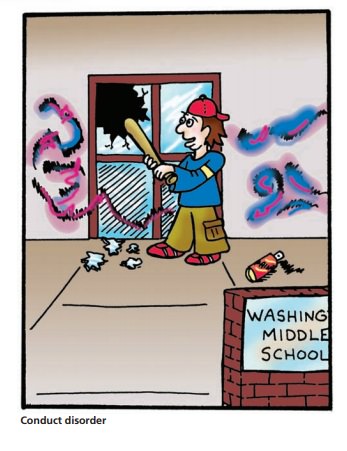 ODD consists of an enduring pattern of uncooperative, defiant, and hostile behavior toward authority figures without major antisocial violations. A certain level of oppositional behavior is common in children and adoles-cents; indeed, it is almost expected at some phases such as 2 to 3 years of age and in early adolescence. Table 20.2 contrasts acceptable characteristics with abnormal behav-ior in adolescents. ODD is diagnosed only when behaviors are more frequent and intense than in unaffected peers and cause dysfunction in social, academic, or work situations. This disorder is diagnosed in about 5% of the population and occurs equally among male and female adolescents. Most authorities believe that genes, temperament, and adverse social conditions interact to create ODD. Twenty-five percent of people with this disorder develop conduct disorder; 10% are diagnosed with antisocial personality disorder as adults (Thomas, 2005). ODD is often comor-bid with other psychiatric disorders such as ADHD, anxi-ety, and affective disorders that need to be treated as well. Treatment approaches for ODD are similar to those used for conduct disorder.

Feeding and Eating Disorders of Infancy and Early Childhood

The disorders of feeding and eating included in this cate-gory are persistent in nature and are not explained by underlying medical conditions. They include pica, rumi-nation disorder, and feeding disorder.

Pica is persistent ingestion of nonnutritive substances such as paint, hair, cloth, leaves, sand, clay, or soil. Pica is com-monly seen in children with mental retardation; it occasion-ally occurs in pregnant women. It comes to the clinician’s attention only if a medical complication develops such as a bowel obstruction or an infection or if a toxic condition develops such as lead poisoning. In most instances, the behavior lasts for several months and then remits.

Rumination disorder is the repeated regurgitation and rechew-ing of food. The child brings partially digested food up into the mouth and usually rechews and reswallows the food. The regurgitation does not involve nausea, vomiting, or any medical condition (APA, 2000). This disorder is relatively uncommon and occurs more often in boys than in girls; it results in malnutrition, weight loss, and even death in about 25% of affected infants. In infants, the disorder frequently remits spontaneously, but it may continue in severe cases.

Feeding disorder of infancy or early childhood is character-ized by persistent failure to eat adequately, which results in significant weight loss or failure to gain weight. Feeding dis-order is equally common in boys and girls and occurs most often during the first year of life. Estimates are that 5% of all pediatric hospital admissions are for failure to gain weight, and up to 50% of those admissions reflect a feeding disorder  with no predisposing medical condition. In severe cases, malnutrition and death can result, but most children have improved growth after some time (APA, 2000).

A tic is a sudden, rapid, recurrent, nonrhythmic, stereo-typed motor movement or vocalization (APA, 2000). Tics can be suppressed but not indefinitely. Stress exacerbates tics, which diminish during sleep and when the person is engaged in an absorbing activity. Common simple motor tics include blinking, jerking the neck, shrugging the shoulders, grimacing, and coughing. Common simple vocal tics include clearing the throat, grunting, sniffing, snorting, and barking. Complex vocal tics include repeat-ing words or phrases out of context, coprolalia (use of socially unacceptable words, frequently obscene), palilalia (repeating one’s own sounds or words), and echolalia (repeating the last-heard sound, word, or phrase; APA, 2000). Complex motor tics include facial gestures, jump-ing, or touching or smelling an object.

Tic disorders tend to run in families. Abnormal trans-mission of the neurotransmitter dopamine is thought to play a part in tic disorders (Scahill & Leckman, 2005). Tic disorders usually are treated with risperidone (Risperdal) or olanzapine (Zyprexa), which are atypical antipsychot-ics. It is important for clients with tic disorders to get plenty of rest and to manage stress because fatigue and stress increase symptoms.

Tourette’s disorder involves multiple motor tics and one or more vocal tics, which occur many times a day for more than 1 year. The complexity and severity of the tics change over time, and the person experiences almost all the pos-sible tics described previously during his or her lifetime. The person has significant impairment in academic, social, or occupational areas and feels ashamed and self- conscious. This rare disorder (4 or 5 in 10,000) is more common in boys and is usually identified by 7 years of age. Some people have lifelong problems; others have no symptoms after early adulthood (APA, 2000).

Chronic motor or vocal tic differs from Tourette’s disorder in that either the motor or the vocal tic is seen, but not both. Transient tic disorder may involve single or multiple vocal or motor tics, but the occurrences last no longer than 12 months.

Encopresis is the repeated passage of feces into inappro-priate places such as clothing or the floor by a child who is at least 4 years of age either chronologically or develop-mentally. It is often involuntary, but it can be intentional. Involuntary encopresis usually is associated with constipation that occurs for psychological, not medical, reasons. Intentional encopresis often is associated with ODD or conduct disorder.

Enuresis is the repeated voiding of urine during the day or at night into clothing or bed by a child at least 5 years of age either chronologically or developmentally. Most often enuresis is involuntary; when intentional, it is asso-ciated with a disruptive behavior disorder. Seventy-five percent of children with enuresis have a first-degree rela-tive who had the disorder. Most children with enuresis do not have a coexisting mental disorder.

Impairment associated with elimination disorders depends on the limitations on the child’s social activities, effects on self-esteem, degree of social ostracism by peers, and anger, punishment, and rejection on the part of par-ents or caregivers (APA, 2000).

Enuresis can be treated effectively with imipramine (Tof-ranil), an antidepressant with a side effect of urinary reten-tion. Both elimination disorders respond to behavioral approaches such as a pad with a warning bell and to positive reinforcement for continence. For children with a disruptive behavior disorder, psychological treatment of that disorder may improve the elimination disorder (Mikkelsen, 2005).

Other Disorders of Infancy, Childhood, or Adolescence

Separation anxiety disorder is characterized by anxiety exceeding that expected for developmental level related to separation from the home or those to whom the child is attached (APA, 2000). When apart from attachment fig-ures, the child insists on knowing their whereabouts and may need frequent contact with them, such as phone calls. These children are miserable away from home and may fear never seeing their homes or loved ones again. They often follow parents like a shadow, cannot be in a room alone, and have trouble going to bed at night unless some-one stays with them. Fear of separation may lead to avoid-ance behaviors such as refusal to attend school or go on errands. Separation anxiety disorder often is accompanied by nightmares and multiple physical complaints such as headaches, nausea, vomiting, and dizziness.

Separation anxiety disorders are thought to result from an interaction between temperament and parenting behav-iors. Inherited temperament traits such as passivity, avoid-ance, fearfulness, or shyness in novel situations coupled with parenting behaviors that encourage avoidance as a way to deal with strange or unknown situations are thought to cause anxiety in the child (Bernstein & Layne, 2005).

Depending on the severity of the disorder, children may have academic difficulties and social withdrawal if their avoidance behavior keeps them from school or relation-ships with others. Children may be described as demand-ing, intrusive, and in need of constant attention, or they may be compliant and eager to please. As adults, they may be slow to leave the family home or overly concerned about and protective of their own spouses and children. They may continue to have marked discomfort when sepa-rated from home or family. Parent education and family therapy are essential components of treatment; 80% of children experience remission at 4-year follow-up (Bernstein & Layne, 2005).

Selective mutism is characterized by persistent failure to speak in social situations where speaking is expected such as school (APA, 2000). Children may communicate by gestures, nodding or shaking the head, or occasionally one-syllable vocalizations in a voice different from their natural voice. These children are often excessively shy, socially withdrawn or isolated, and clinging; they may have temper tantrums. Selective mutism is rare and slightly more common in girls than in boys. It usually lasts only a few months but may persist for years.

Reactive attachment disorder involves a markedly dis-turbed and developmentally inappropriate social related-ness in most situations. This disorder usually begins before 5 years of age and is associated with grossly patho-genic care such as parental neglect, abuse, or failure to meet the child’s basic physical or emotional needs. Repeated changes in primary caregivers, such as multiple foster care placements, also can prevent the formation of stable attachments (APA, 2000). The disturbed social relatedness may be evidenced by the child’s failure to ini-tiate or respond to social interaction (inhibited type) or indiscriminate sociability or lack of selectivity in choice of attachment figures (disinhibited type). In the first type, the child will not cuddle or desire to be close to anyone. In the second type, the child’s response is the same to a stranger or to a parent.

Initially, treatment focuses on the child’s safety, includ-ing removal of the child from the home if neglect or abuse is found. Individual and family therapy (either with par-ents or foster caregivers) is most effective. With early identification and effective intervention, remission or considerable improvements can be attained. Otherwise, the disorder follows a continuous course, with relation-ship problems persisting into adulthood.

Stereotypic movement disorder is associated with many genetic, metabolic, and neurologic disorders and often accompanies mental retardation. The precise cause is unknown. It involves repetitive motor behavior that is nonfunctional and either interferes with normal activities or results in self-injury requiring medical treatment (APA, 2000). Stereotypic movements may include waving, rock-ing, twirling objects, biting fingernails, banging the head, biting or hitting oneself, or picking at the skin or body orifices. Generally speaking, the more severe the retarda-tion, the higher the risk for self-injury behaviors. Stereo-typic movement behaviors are relatively stable over time but may diminish with age (Shah, 2005).

No specific treatment has been shown effective. Clomipramine (Anafranil) and desipramine (Norpramin) are effective in treating severe nail biting; haloperidol (Haldol) and chlorpromazine (Thorazine) have been effective for stereotypic movement disorder associated with mental retardation and autistic disorder.