Conduct disorder is characterized by persistent antisocial behavior in children and adolescents that significantly impairs their ability to function in social, academic, or occupational areas.

Conduct disorder is characterized by persistent antisocial behavior in children and adolescents that significantly impairs their ability to function in social, academic, or occupational areas. Symptoms are clustered in four areas:

aggression to people and animals, destruction of property, deceitfulness and theft, and serious violation of rules (Thomas, 2005). People with conduct disorder have little empathy for others; they have low self-esteem, poor frus-tration tolerance, and temper outbursts. Conduct disorder frequently is associated with early onset of sexual behav-ior, drinking, smoking, use of illegal substances, and other reckless or risky behaviors. It occurs three times more often in boys than in girls. As many as 30% to 50% of these children are diagnosed with antisocial personality disorder as adults.

Two subtypes of conduct disorder are based on age at onset. The childhood-onset type involves symptoms before 10 years of age, including physical aggression toward oth-ers and disturbed peer relationships. These children are more likely to have persistent conduct disorder and to develop antisocial personality disorder as adults. Adoles-cent-onset type is defined by no behaviors of conduct dis-order until after 10 years of age. These adolescents are less likely to be aggressive, and they have more normal peer relationships. They are less likely to have persistent con-duct disorder or antisocial personality disorder as adults (APA, 2000). 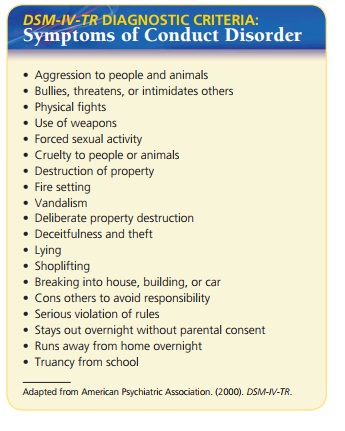 Conduct disorders can be classified as mild, moderate, or severe (APA, 2000):

·    Mild: The person has some conduct problems that cause relatively minor harm to others. Examples in-clude lying, truancy, and staying out late without permission.

·    Moderate: The number of conduct problems increases as does the amount of harm to others. Examples include vandalism and theft.

·    Severe: The person has many conduct problems that cause considerable harm to others. Examples include forced sex, cruelty to animals, use of a weapon, bur-glary, and robbery.

The course of conduct disorder is variable. People with the adolescent-onset type or mild problems can achieve adequate social relationships and academic or occupational success as adults. Those with the childhood-onset type or more severe problem behaviors are more likely to develop antisocial personality disorder as adults. Even those who do not have antisocial personality disorder may lead trou-bled lives with difficult interpersonal relationships, unhealthy lifestyles, and an inability to support themselves (Thomas, 2005).

There is a genetic risk for conduct disorder, although no specific gene marker has been identified (Thomas, 2005). The disorder is more common in children who have a sibling with conduct disorder or a parent with anti-social personality disorder, substance abuse, mood disor-der, schizophrenia, or ADHD (APA, 2000).

A lack of reactivity of the autonomic nervous system has been found in children with conduct disorder; this nonresponsiveness is similar to adults with antisocial per-sonality disorder. The abnormality may cause more aggression in social relationships as a result of decreased normal avoidance or social inhibitions. Research into the role of neurotransmitters is promising (Thomas, 2005).

Poor family functioning, marital discord, poor parent-ing, and a family history of substance abuse and psychiat-ric problems are all associated with the development of conduct disorder. Prenatal exposure to alcohol causes an increased risk for conduct disorder (Disney, Iacono, McGue, Tully, & Legrand, 2008). Child abuse is an espe-cially significant risk factor. The specific parenting pat-terns considered ineffective are inconsistent parental responses to the child’s demands and giving in to demands as the child’s behavior escalates. Exposure to violence in the media and community is a contributing factor for the child at risk in other areas. Socioeconomic disadvantages, such as inadequate housing, crowded conditions, and pov-erty, also increase the likelihood of conduct disorder in at-risk children (McGuinness, 2006).

Academic underachievement, learning disabilities, hyper-activity, and problems with attention span are all associated with conduct disorder. Children with conduct disorder have difficulty functioning in social situations. They lack the abil-ities to respond appropriately to others and to negotiate con-flict, and they lose the ability to restrain themselves when emotionally stressed. They are often accepted only by peers with similar problems (Thomas, 2005).

Concerns have been raised that “difficult” children may be mistakenly labeled as having conduct disorder. Knowing the client’s history and circumstances is essential for accu-rate diagnosis. In high-crime areas, aggressive behavior may be protective and not necessarily indicative of con-duct disorder. In immigrants from war-ravaged countries, aggressive behavior may have been necessary for survival, so these individuals should not be diagnosed with conduct disorder (APA, 2000).

Many treatments have been used for conduct disorder with only modest effectiveness. Early intervention is more effec-tive, and prevention is more effective than treatment. Dra-matic interventions, such as “boot camp” or incarceration, have not proved effective and may even worsen the situa-tion (Thomas, 2005). Treatment must be geared toward the client’s developmental age; no one treatment is suitable for all ages. Preschool programs, such as Head Start, result in lower rates of delinquent behavior and conduct disor-der through use of parental education about normal growth and development, stimulation for the child, and parental support during crises.

For school-aged children with conduct disorder, the child, family, and school environment are the focus of treatment. Techniques include parenting education, social skills training to improve peer relationships, and attempts to improve academic performance and increase the child’s ability to comply with demands from authority figures. Family therapy is considered to be essential for children in this age group (Thomas, 2005).

Adolescents rely less on their parents and more on peers, so treatment for this age group includes individual therapy. Many adolescent clients have some involvement with the legal system as a result of criminal behavior, and consequently they may have restrictions on their freedom. Use of alcohol and other drugs plays a more significant role for this age group; any treatment plan must address this issue. The most promising treatment approach includes keeping the client in his or her environment with family and individual therapies. The plan usually includes conflict reso-lution, anger management, and teaching social skills.

Medications alone have little effect but may be used in conjunction with treatment for specific symptoms. For example, the client who presents a clear danger to others may be prescribed an antipsychotic medication, or a client with a labile mood may benefit from lithium or another mood stabilizer such as carbamazepine (Tegretol) or valp-roic acid (Depakote) (Thomas, 2005).