Attention deficit hyperactivity disorder (ADHD) is characterized by inattentiveness, overactivity, and impulsiveness. ADHD is a common disorder, especially in boys, and probably accounts for more child mental health referrals than any other single disorder (Hechtman, 2005). The essential feature of ADHD is a persistent pattern of inatten-tion and/or hyperactivity and impulsivity more common than generally observed in children of the same age.

ADHD affects an estimated 3% to 5% of all school-aged children. The ratio of boys to girls ranges from 3:1 in non-clinical settings to 9:1 in clinical settings (Hechtman, 2005). To avoid overdiagnosis of ADHD, a qualified spe-cialist such as a pediatric neurologist or a child psychia-trist must conduct the evaluation for ADHD. Children who are very active or hard to handle in the classroom can be diagnosed and treated mistakenly for ADHD. Some of these overly active children may suffer from psychosocial stressors at home, inadequate parenting, or other psychiatric disorders. Distinguishing bipolar disorder from ADHD can be difficult but is crucial in order to prescribe the most effective treatment (Hojman, 2008). 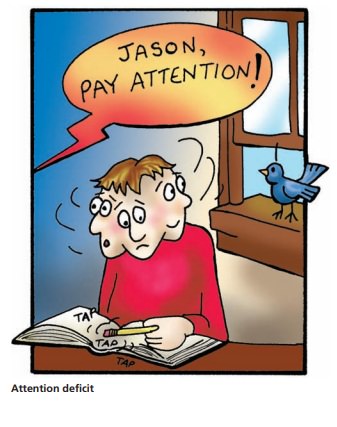 ADHD usually is identified and diagnosed when the child begins preschool or school, although many parents report problems from a much younger age. As infants, children with ADHD are often fussy and temperamental and have poor sleeping patterns. Toddlers may be described as “always on the go” and “into everything,” at times disman-tling toys and cribs. They dart back and forth, jump and climb on furniture, run through the house, and cannot tol-erate sedentary activities such as listening to stories. At this point in a child’s development, it can be difficult for parents to distinguish normal active behavior from exces-sive hyperactive behavior.

By the time the child starts school, symptoms of ADHD begin to interfere significantly with behavior and perfor-mance (Dang, Warrington, Tung, Baker, & Pan, 2007). The child fidgets constantly, is in and out of assigned seats, and makes excessive noise by tapping or playing with pen-cils or other objects. Normal environmental noises, such as someone coughing, distract the child. He or she cannot listen to directions or complete tasks. The child interrupts and blurts out answers before questions are completed.

Socially, peers may ostracize or even ridicule the child for his or her behavior. Forming positive peer relation-ships is difficult because the child cannot play coopera-tively or take turns and constantly interrupts others (APA, 2000). Studies have shown that both teachers and peers perceive children with ADHD as more aggressive, more bossy, and less likable (Hechtman, 2005). This perception results from the child’s impulsivity, inability to share or take turns, tendency to interrupt, and failure to listen to and follow directions. Thus, peers and teachers may exclude the child from activities and play, may refuse to socialize with the child, or may respond to the child in a harsh, punitive, or rejecting manner.

Approximately two thirds of children diagnosed with ADHD continue to have problems in adolescence. Typical impulsive behaviors include cutting class, getting speed-ing tickets, failing to maintain interpersonal relationships, and adopting risk-taking behaviors, such as using drugs or alcohol, engaging in sexual promiscuity, fighting, and vio-lating curfew. Many adolescents with ADHD have disci-pline problems serious enough to warrant suspension or expulsion from high school (Hechtman, 2005). The sec-ondary complications of ADHD, such as low self-esteem and peer rejection, continue to pose serious problems.

Previously, it was believed that children outgrew ADHD, but it is now known that ADHD can persist into adulthood. Estimates are that 30% to 50% of children with ADHD have symptoms that continue into adulthood. In one study, adults who had been treated for hyperactivity 25 years ear-lier were three to four times more likely than their brothers to experience nervousness, restlessness, depression, lack of friends, and low frustration tolerance. Approximately 70% to 75% of adults with ADHD have at least one coexisting psychiatric diagnosis, with social phobia, bipolar disorder, major depression, and alcohol dependence being the most common (Antai-Otong, 2008).

Although much research has taken place, the definitive causes of ADHD remain unknown. There may be cortical-arousal, information-processing, or maturational abnor-malities in the brain (Rowe & Hermens, 2006). Combined factors, such as environmental toxins, prenatal influences, heredity, and damage to brain structure and functions, are likely responsible (Hechtman, 2005). Prenatal exposure to alcohol, tobacco, and lead and severe malnutrition in early childhood increase the likelihood of ADHD. Although the relation between ADHD and dietary sugar and vitamins has been studied, results have been incon-clusive ( Hechtman, 2005).

Brain images of people with ADHD suggest decreased metabolism in the frontal lobes, which are essential for attention, impulse control, organization, and sustained goal-directed activity. Studies also have shown decreased blood perfusion of the frontal cortex in children with ADHD and frontal cortical atrophy in young adults with a history of childhood ADHD. Another study showed decreased glucose use in the frontal lobes of parents of children with ADHD who had ADHD themselves (Hechtman, 2005). Evidence is not conclusive, but research in these areas seems promising.

There seems to be a genetic link for ADHD that is most likely associated with abnormalities in catecholamine and possibly serotonin metabolism. Having a first-degree rela-tive with ADHD increases the risk of the disorder by four to five times more than that of the general population (Hechtman, 2005). Despite the strong evidence support-ing a genetic contribution, there are also sporadic cases of ADHD with no family history of ADHD; this furthers the theory of multiple contributing factors.

ADHD is known to occur in various cultures. It is more prevalent in Western cultures, but that may be the result of different diagnostic practices rather than the actual differ-ences in existence (APA, 2000).

The Child Behavior Checklist, Teacher Report Form, and Youth Self Report (for ages 11 to 18 years) are rating scales frequently used to determine problem areas and competencies. These scales are often part of a comprehen-sive assessment of ADHD in children. They have been determined to be culturally competent and are widely used in various countries (King et al., 2005).

Pierce and Reid (2004) found that an increasing number of children from culturally diverse groups are diagnosed with ADHD. They believe this increase may represent overidentification of ADHD in culturally diverse children and urge practitioners to consider cultural con-text before making the diagnosis.

Yeh, Hough, McCabe, Lau, and Garland (2004) stud-ied parental beliefs about the causes of mental illness in their children. They found that African-American, Asian/ Pacific Islander American, and Latino parents were less likely to endorse biopsychosocial causes of mental illness than non-Hispanic white parents and were more likely to believe in sociologic causes. The authors believe this may affect participation in and compliance with prescribed treatment.

No one treatment has been found to be effective for ADHD; this gives rise to many different approaches such as sugar-controlled diets and megavitamin therapy. Parents need to know that any treatment heralded as the cure for ADHD is probably too good to be true (Hechtman, 2005). ADHD is chronic; goals of treatment involve managing symptoms, reducing hyperactivity and impulsivity, and increasing the child’s attention so that he or she can grow and develop normally. The most effective treatment combines pharma-cotherapy with behavioral, psychosocial, and educational interventions (Dang et al., 2007).

Medications often are effective in decreasing hyperactivity and impulsiveness and improving attention; this enables the child to participate in school and family life. The most common medications are methylphenidate (Ritalin) and an amphetamine compound (Adderall) (Hechtman, 2005; Lehne, 2006). Methylphenidate is effective in 70% to 80% of children with ADHD; it reduces hyperactivity, impulsiv-ity, and mood lability and helps the child to pay attention more appropriately. Dextroamphetamine (Dexedrine) and pemoline (Cylert) are other stimulants used to treat ADHD. The most common side effects of these drugs are insomnia, loss of appetite, and weight loss or failure to gain weight. Methylphenidate, dextroamphetamine, and amphetamine compounds are also available in a sustained-release form taken once daily; this eliminates the need for additional doses when the child is at school. Methylphenidate is also available in a daily transdermal patch, marketed as Daytrana. Because pemoline can cause liver damage, it is the last of these drugs to be prescribed.

Giving stimulants during daytime hours usually effec-tively combats insomnia. Eating a good breakfast with the morning dose and substantial nutritious snacks late in the day and at bedtime helps the child to maintain an adequate dietary intake. When stimulant medications are not effective or their side effects are intolerable, anti-depressants are the second choice for treatment . Atomoxetine (Strattera) is the only nonstim-ulant drug specifically developed and tested by the U.S. Food and Drug Administration for treatment of ADHD. It is an antidepressant, specifically a selective norepi-nephrine reuptake inhibitor. The most common side effects in children during clinical trials were decreased appetite, nausea, vomiting, tiredness, and upset stom-ach. In adults, side effects were similar to those of other antidepressants, including insomnia, dry mouth, urinary retention, decreased appetite, nausea, vomiting, dizzi-ness, and sexual side effects. In addition, atomoxetine can cause liver damage, so individuals taking the drug need to have liver function tests periodically (Cheng, Chen, Ko, & Ng, 2007). Table 20.1 lists drugs, dosages, and nursing considerations for clients with ADHD. 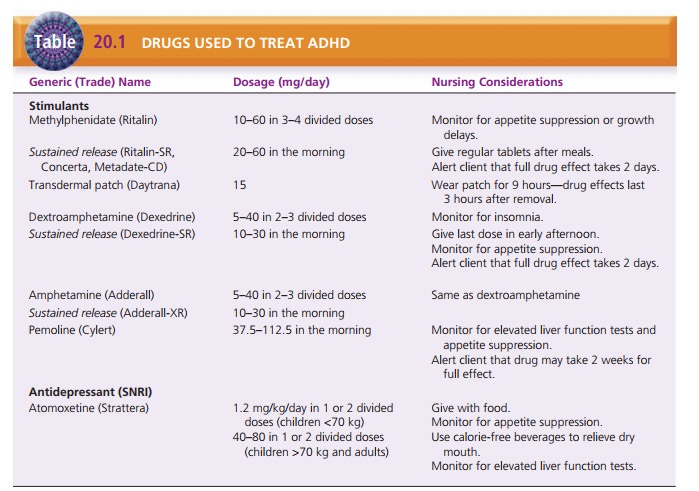 Strategies for Home and School

Medications do not automatically improve the child’s aca-demic performance or ensure that he or she makes friends. Behavioral strategies are necessary to help the child to master appropriate behaviors. Environmental strategies at school and home can help the child to succeed in those settings. Educating parents and helping them with parent-ing strategies are crucial components of effective treatment of ADHD. Effective approaches include providing consis-tent rewards and consequences for behavior, offering con-sistent praise, using time-out, and giving verbal reprimands. Additional strategies are issuing daily report cards for behavior and using point systems for positive and negative behavior (Hechtman, 2005).

In therapeutic play, play techniques are used to under-stand the child’s thoughts and feelings and to promote communication. This should not be confused with play therapy, a psychoanalytic technique used by psychiatrists. Dramatic play is acting out an anxiety-producing situation such as allowing the child to be a doctor or use a stetho-scope or other equipment to take care of a patient (a doll). Play techniques to release energy could include pounding pegs, running, or working with modeling clay. Creative play techniques can help children to express themselves, for example, by drawing pictures of themselves, their family, and peers. These techniques are especially useful when children are unable or unwilling to express themselves verbally.