PSYCHIATRIC DISORDERS ARE not diagnosed as easily in children as they are in adults.

PSYCHIATRIC DISORDERS ARE not diagnosed as easily in children as they are in adults. Children usually lack the abstract cognitive abilities and verbal skills to describe what is happening. Because they are constantly changing and developing, children have limited sense of a stable, normal self to allow them to discriminate unusual or unwanted symptoms from normal feelings and sensations. Additionally, behaviors that are normal in a child of one age may indicate problems in a child of another age. For example, an infant who cries and wails when separated from his or her mother is normal. If the same child at 5 years of age cries and shows extreme anxiety when separated only briefly from the mother, however, this behavior would warrant investigation.

Children and adolescents experience some of the same mental health problems as adults, such as mood and anxiety disorders, and are diagnosed with these disorders using the same criteria as for adults. Eating disorders, especially anorexia, usually begin in adolescence and continue into adult-hood. Mood, anxiety, and eating disorders are discussed in separate chap-ters of this book. 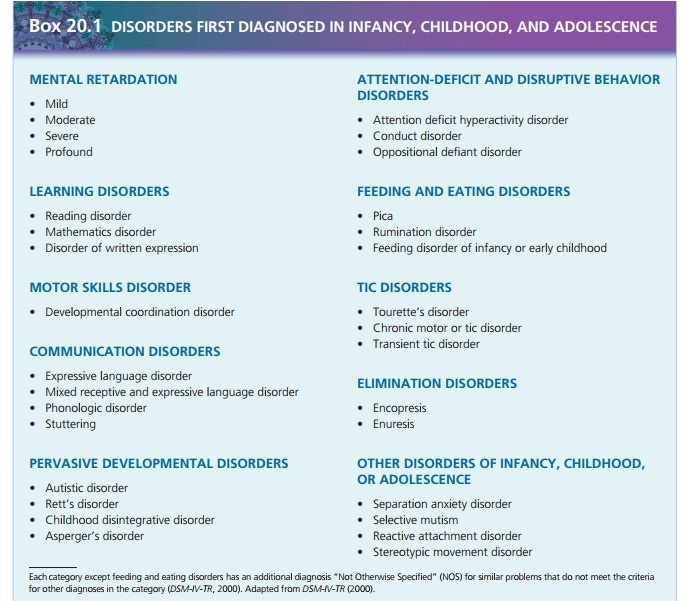 The essential feature of mental retardation is below-average intellectual functioning (intelligence quotient [IQ] less than 70) accompanied by significant limitations in areas of adaptive functioning such as communication skills, self-care, home living, social or interpersonal skills, use of community resources, self-direction, academic skills, work, leisure, and health and safety (King, Hodapp, & Dykens, 2005). The degree of retardation is based on IQ and greatly affects the person’s ability to function:

Causes of mental retardation include hereditary condi-tions such as Tay–Sachs disease or fragile X chromosome syndrome; early alterations in embryonic development, such as trisomy 21 or maternal alcohol intake, that cause fetal alcohol syndrome; pregnancy or perinatal problems such as fetal malnutrition, hypoxia, infections, and trauma; medical conditions of infancy such as infection or lead poisoning; and environmental influences such as depriva-tion of nurturing or stimulation.

A learning disorder is diagnosed when a child’s achieve-ment in reading, mathematics, or written expression is below that expected for age, formal education, and intel-ligence. Learning problems interfere with academic achievement and life activities requiring reading, math, or writing (American Psychiatric Association [APA], 2000). Reading and written expression disorders usually are iden-tified in the first grade; math disorder may go undetected until the child reaches fifth grade. Approximately 5% of children in U.S. public schools are diagnosed with a learn-ing disorder. The school dropout rate for students with learning disorders is 1.5 times higher than the average rate for all students (APA, 2000).

Low self-esteem and poor social skills are common in children with learning disorders. As adults, some have prob-lems with employment or social adjustment; others have minimal difficulties. Early identification of the learning dis-order, effective intervention, and no coexisting problems is associated with better outcomes. Children with learning disorders are assisted with academic achievement through special education classes in public schools.

The essential feature of developmental coordination disorder is impaired coordination severe enough to interfere with academic achievement or activities of daily living (APA, 2000). This diagnosis is not made if the problem with motor coordination is part of a general medical condition such as cerebral palsy or muscular dystrophy. This disor-der becomes evident as a child attempts to crawl or walk or as an older child tries to dress independently or manip-ulate toys such as building blocks. Developmental coordi-nation disorder often coexists with a communication disorder. Its course is variable; sometimes lack of coordi-nation persists into adulthood (APA, 2000). Schools pro-vide adaptive physical education and sensory integration programs to treat motor skills disorder. Adaptive physical education programs emphasize inclusion of movement games such as kicking a football or soccer ball. Sensory integration programs are specific physical therapies pre-scribed to target improvement in areas where the child has difficulties. For example, a child with tactile defensiveness (discomfort at being touched by another person) might be involved in touching and rubbing skin surfaces (Pataki & Spence, 2005).

A communication disorder is diagnosed when a communi-cation deficit is severe enough to hinder development, academic achievement, or activities of daily living, includ-ing socialization. Expressive language disorder involves an impaired ability to communicate through verbal and sign languages. The child has difficulty learning new words and speaking in complete and correct sentences; his or her speech is limited. Mixed receptive-expressive language disor-der includes the problems of expressive language disorder along with difficulty understanding (receiving) and deter-mining the meaning of words and sentences. Both disor-ders can be present at birth (developmental) or may be acquired as a result of neurologic injury or insult to the brain. Phonologic disorder involves problems with articula-tion (forming sounds that are part of speech). Stuttering is a disturbance of the normal fluency and time patterning of speech. Phonologic disorder and stuttering run in families and occur more frequently in boys than in girls.

Communication disorders may be mild to severe. Dif-ficulties that persist into adulthood are related most closely to the severity of the disorder. Speech and language thera-pists work with children who have communication disor-ders to improve their communication skills and to teach parents to continue speech therapy activities at home ( Johnson & Beitchman, 2005).