Dementia is a mental disorder that involves multiple cog-nitive deficits, primarily memory impairment, and at least one of the following cognitive disturbances :

Dementia is a mental disorder that involves multiple cog-nitive deficits, primarily memory impairment, and at least one of the following cognitive disturbances (APA, 2000):

·    Aphasia, which is deterioration of language function Apraxia, which is impaired ability to execute motor functions despite intact motor abilities

·    Agnosia, which is inability to recognize or name ob-jects despite intact sensory abilities

·    Disturbance in executive functioning, which is the ability to think abstractly and to plan, initiate, sequence, monitor, and stop complex behavior 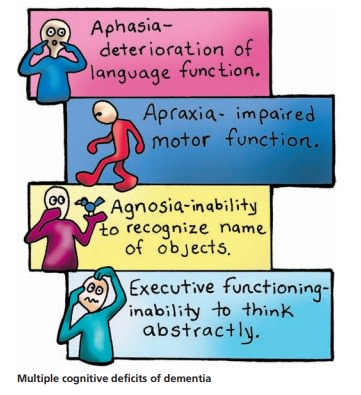 These cognitive deficits must be sufficiently severe to impair social or occupational functioning and must repre-sent a decline from previous functioning.

Dementia must be distinguished from delirium; if the two diagnoses coexist, the symptoms of dementia remain even when the delirium has cleared. Table 21.1 compares delirium and dementia.

Memory impairment is the prominent early sign of dementia. Clients have difficulty learning new material and forget previously learned material. Initially, recent memory is impaired—for example, forgetting where cer-tain objects were placed or that food is cooking on the stove. In later stages, dementia affects remote memory; cli-ents forget the names of adult children, their lifelong occu-pations, and even their names.

Aphasia usually begins with the inability to name familiar objects or people and then progresses to speech that becomes vague or empty with excessive use of terms such as it or thing. Clients may exhibit echolalia (echoing what is heard) or palilalia (repeating words or sounds over and over) (APA, 2000). Apraxia may cause clients to lose the ability to per-form routine self-care activities such as dressing or cooking. Agnosia is frustrating for clients: they may look at a table and chair but are unable to name them. Disturbances in execu-tive functioning are evident as clients lose the ability to learn new material, solve problems, or carry out daily activities such as meal planning or budgeting.

Clients with dementia also may underestimate the risks associated with activities or overestimate their ability to function in certain situations. For example, while driving, clients may cut in front of other drivers, sideswipe parked cars, or fail to slow down when they should. 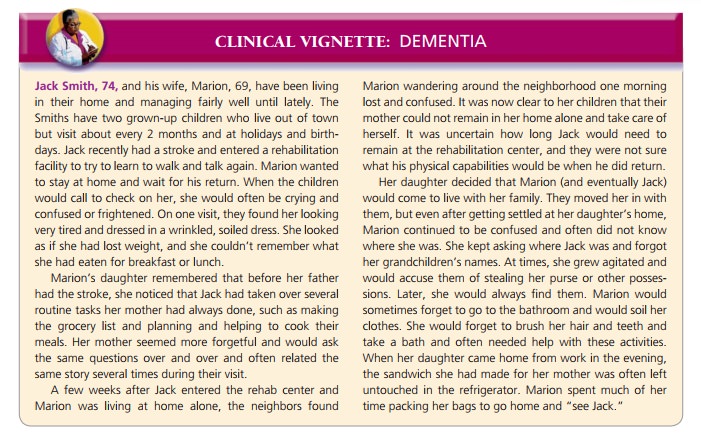 When an underlying, treatable cause is not present, the course of dementia is usually progressive. Dementia often is described in stages:

·        Mild: Forgetfulness is the hallmark of beginning, mild de-mentia. It exceeds the normal, occasional forgetfulness experienced as part of the aging process. The person has difficulty finding words, frequently loses objects, and be-gins to experience anxiety about these losses. Occupa-tional and social settings are less enjoyable, and the person may avoid them. Most people remain in the community during this stage.

·    Moderate: Confusion is apparent, along with progressive memory loss. The person no longer can perform com-plex tasks but remains oriented to person and place. He or she still recognizes familiar people. Toward the end of this stage, the person loses the ability to live indepen-dently and requires assistance because of disorientation to time and loss of information such as address and tele-phone number. The person may remain in the commu-nity if adequate caregiver support is available, but some people move to supervised living situations.

·    Severe: Personality and emotional changes occur. The person may be delusional, wander at night, forget the names of his or her spouse and children, and require assistance in activities of daily living (ADLs). Most peo-ple live in nursing facilities when they reach this stage unless extraordinary community support is available. 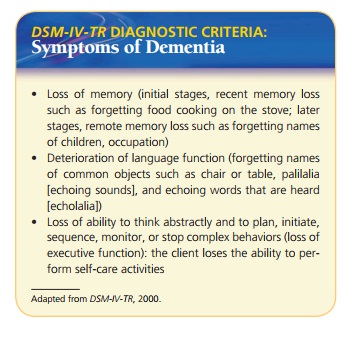 Causes vary, although the clinical picture is similar for most dementias. Often, no definitive diagnosis can be made until completion of a postmortem examination.

Metabolic activity is decreased in the brains of clients with dementia; it is not known whether dementia causes decreased metabolic activity or if decreased metabolic activity results in dementia. A genetic component has been identified for some dementias such as Huntington’s dis-ease. An abnormal APOE gene is known to be linked with Alzheimer’s disease. Other causes of dementia are related to infections such as human immunodeficiency virus (HIV) infection or Creutzfeldt–Jakob disease. The most common types of dementia and their known or hypothe-sized causes follow (APA, 2000; Neugroschl et al., 2005):

·    Alzheimer’s disease is a progressive brain disorder that has a gradual onset but causes an increasing decline in functioning, including loss of speech, loss of motor function, and profound personality and behavioral changes such as paranoia, delusions, hallucinations, in-attention to hygiene, and belligerence. It is evidenced by atrophy of cerebral neurons, senile plaque deposits, and enlargement of the third and fourth ventricles of the brain. Risk for Alzheimer’s disease increases with age, and average duration from onset of symptoms to death is 8 to 10 years. Dementia of the Alzheimer’s type, especially with late onset (after 65 years of age), may have a genetic component. Research has shown link-ages to chromosomes 21, 14, and 19 (APA, 2000).

·    Vascular dementia has symptoms similar to those of Alzheimer’s disease, but onset is typically abrupt, fol-lowed by rapid changes in functioning; a plateau, or leveling-off period; more abrupt changes; another level-ing-off period; and so on. Computed tomography or magnetic resonance imaging usually shows multiple vascular lesions of the cerebral cortex and subcortical structures resulting from the decreased blood supply to the brain.

·    Pick’s disease is a degenerative brain disease that par-ticularly affects the frontal and temporal lobes and re-sults in a clinical picture similar to that of Alzheimer’s disease. Early signs include personality changes, loss of social skills and inhibitions, emotional blunting, and language abnormalities. Onset is most commonly 50 to 60 years of age; death occurs in 2 to 5 years.

·    Creutzfeldt–Jakob disease is a central nervous system disorder that typically develops in adults 40 to 60 years of age. It involves altered vision, loss of coordination or abnormal movements, and dementia that usually pro-gresses rapidly (a few months). The cause of the encephalopathy is an infectious particle resistant to boiling, some disinfectants (e.g., formalin, alcohol), and ultraviolet radiation. Pressured autoclaving or bleach can inactivate the particle.

·        HIV infection can lead to dementia and other neuro-logic problems; these may result directly from invasion of nervous tissue by HIV or from other acquired immu-nodeficiency syndrome–related illnesses such as toxo-plasmosis and cytomegalovirus. This type of dementia can result in a wide variety of symptoms ranging from mild sensory impairment to gross memory and cogni-tive deficits to severe muscle dysfunction.

·    Parkinson’s disease is a slowly progressive neurologic condition characterized by tremor, rigidity, bradykine-sia, and postural instability. It results from loss of neu-rons of the basal ganglia. Dementia has been reported in approximately 20% to 60% of people with Parkinson’s disease and is characterized by cognitive and motor slowing, impaired memory, and impaired executive functioning.

·    Huntington’s disease is an inherited, dominant gene disease that primarily involves cerebral atrophy, demy-elination, and enlargement of the brain ventricles. Ini-tially, there are choreiform movements that are continuous during waking hours and involve facial contortions, twisting, turning, and tongue movements. Personality changes are the initial psychosocial mani-festations, followed by memory loss, decreased intellec-tual functioning, and other signs of dementia. The disease begins in the late 30s or early 40s and may last 10 to 20 years or more before death.

·    Dementia can be a direct pathophysiologic consequence of head trauma. The degree and type of cognitive impairment and behavioral disturbance depend on the location and extent of the brain injury. When it occurs as a single injury, the dementia is usually stable rather than progressive. Repeated head injury (e.g., from box-ing) may lead to progressive dementia.

An estimated 5 million people in the United States have moderate to severe dementia from various causes. World-wide, it is estimated there are 4.6 million new cases each year (Smith, 2008). Prevalence rises with age: estimated prevalence of moderate to severe dementia in people older than 65 years is about 5%; 20% to 40% of the general pop-ulation older than 85 years have dementia. Predictions are that by 2050, there will be 18 million Americans with dementia (Neugroschl et al., 2005) and 114 million people with dementia worldwide (Smith, 2008). Dementia of the Alzheimer’s type is the most common type in North America (60% of all dementias), Scandinavia, and Europe; vascular dementia is more prevalent in Russia and Japan. Dementia of the Alzheimer’s type is more common in women; vascular dementia is more common in men.

Clients from other cultures may find the questions used on many assessment tools for dementia difficult or impossible to answer. Examples include the names of former U.S. presidents. To avoid drawing erroneous conclusions, the nurse must be aware of differences in the person’s knowl-edge base.

The nurse also must be aware of different culturally influenced perspectives and beliefs about elderly family members. In many Eastern countries and among Native Americans, elders hold a position of authority, respect, power, and decision making for the family; this does not change despite memory loss or confusion. For fear of seeming disrespectful, other family members may be reluc-tant to make decisions or plans for elders with dementia. The nurse must work with family members to accomplish goals without making them feel they have betrayed the revered elder.

Whenever possible, the underlying cause of dementia is identified so that treatment can be instituted. For example, the progress of vascular dementia, the second most com-mon type, may be halted with appropriate treatment of the underlying vascular condition (e.g., changes in diet, exer-cise, control of hypertension, or diabetes). Improvement of cerebral blood flow may arrest the progress of vascular dementia in some people (Neugroschl et al., 2005).

The prognosis for the progressive types of dementia may vary as described earlier, but all prognoses involve progres-sive deterioration of physical and mental abilities until death. Typically, in the later stages, clients have minimal cognitive and motor function, are totally dependent on caregivers, and are unaware of their surroundings or people in the environment. They may be totally uncommunicative or make unintelligible sounds or attempts to verbalize.

For degenerative dementias, no direct therapies have been found to reverse or retard the fundamental pathophys-iologic processes. Levels of numerous neurotransmitters such as acetylcholine, dopamine, norepinephrine, and serotonin are decreased in dementia. This has led to attempts at replenishment therapy with acetylcholine precursors, cholinergic agonists, and cholinesterase inhib-itors. Donepezil (Aricept), rivastigmine (Exelon), and galantamine (Reminyl) are cholinesterase inhibitors and have shown modest therapeutic effects and temporarily slow the progress of dementia (Table 21.2). They have no effect, however, on the overall course of the disease. Tacrine (Cognex) is also a cholinesterase inhibitor; how-ever, it elevates liver enzymes in about 50% of clients using it. Lab tests to assess liver function are necessary every 1 to 2 weeks; therefore, tacrine is rarely prescribed. Memantine (Namenda) is an NMDA receptor antagonist that can slow the progression of Alzheimer’s in the moderate or severe stages (Facts and Comparisons, 2009).

Clients with dementia demonstrate a broad range of behaviors that can be treated symptomatically. Doses of medications are one half to two thirds lower than usually prescribed. Antidepressants are effective for significant depressive symptoms; however, they can cause delirium. SSRI antidepressants are used since they have fewer side effects. Antipsychotics, such as haloperidol (Haldol), olan-zapine (Zyprexa), risperidone (Risperdal), and quetiapine (Seroquel), may be used to manage psychotic symptoms of delusions, hallucinations, or paranoia, and other behav-iors, such as agitation or aggression. The potential benefit of antipsychotics must be weighed with the risks, such as an increased mortality rate, primarily from cardiovascular complications. Due to this increased risk, the FDA has not approved antipsychotics for dementia treatment, and there is a black box warning issued. Lithium carbon-ate, carbamazepine (Tegretol), and valproic acid (Depak-ote) help to stabilize affective lability and to diminish aggressive outbursts. Benzodiazepines are used cautiously because they may cause delirium and can worsen already compromised cognitive abilities (Neugroschl et al., 2005).