The cell division process of meiosis produces the gametes—sperm or egg cells.

Spermatogenesis is the process of meiosis as it takes place in the testes, the site of sperm production. Within each testis areseminiferous tubules that contain spermatogonia, which are stem cells that gen-erate sperm. A spermatogonium divides by mitosis to form two cells, one of which will remain in place as a stem cell, while the other differentiates (specializes) to become a primary spermatocyte that will undergo meiosis (Fig. 20–1). As you may recall, gamete formation is regulated by hormones Follicle-stimulating hormone (FSH) from the anterior pituitary gland initiates sperm production, and testos-terone, secreted by the testes when stimulated by luteinizing hormone (LH) from the anterior pituitary, promotes the maturation of sperm. Inhibin, also pro-duced by the testes, decreases the secretion of FSH. As you can see in Fig. 20–1, for each primary spermato-cyte that undergoes meiosis, four functional sperm cells are produced. 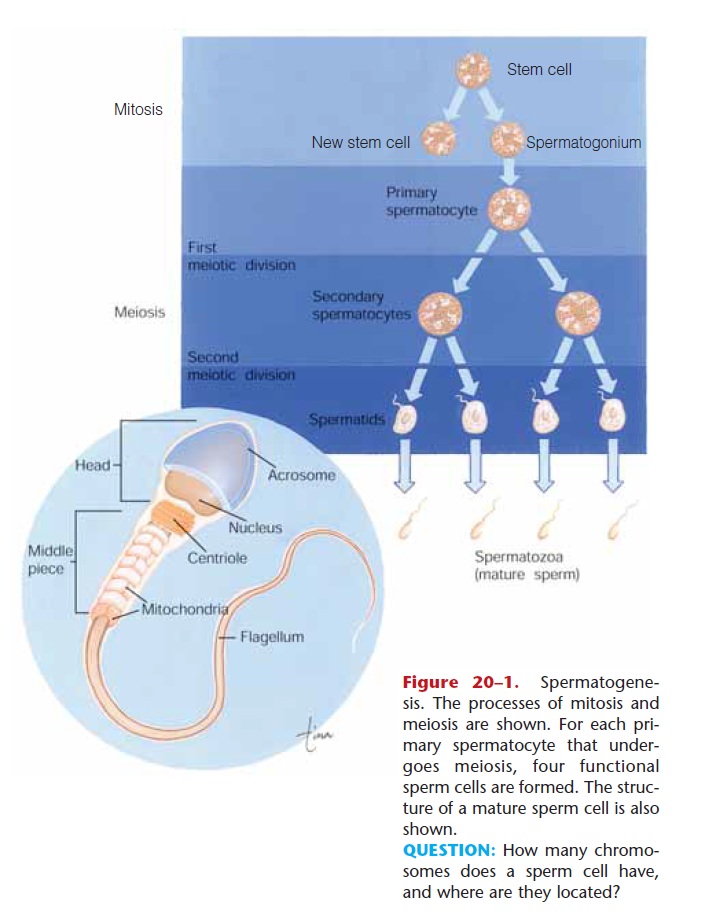 Sperm production begins at puberty (10 to 14 years of age), and millions of sperm are formed each day in the testes. Although sperm production dimin-ishes with advancing age, there is usually no complete cessation, as there is of egg production in women at menopause.

Oogenesis is the process of meiosis for egg cell for-mation; it begins in the ovaries and is also regulated by hormones. FSH initiates the growth of ovarian folli-cles, each of which contains an oogonium, a stem cell for egg cell production (Fig. 20–2). This hormone also stimulates the follicle cells to secrete estrogen, which promotes the maturation of the ovum. Notice that for each primary oocyte that undergoes meiosis, only one functional egg cell is produced. The other three cells produced are called polar bodies. They have no func-tion, and will simply deteriorate. A mature ovarian fol-licle actually contains the secondary oocyte; the second meiotic division will take place if and when the egg is fertilized. 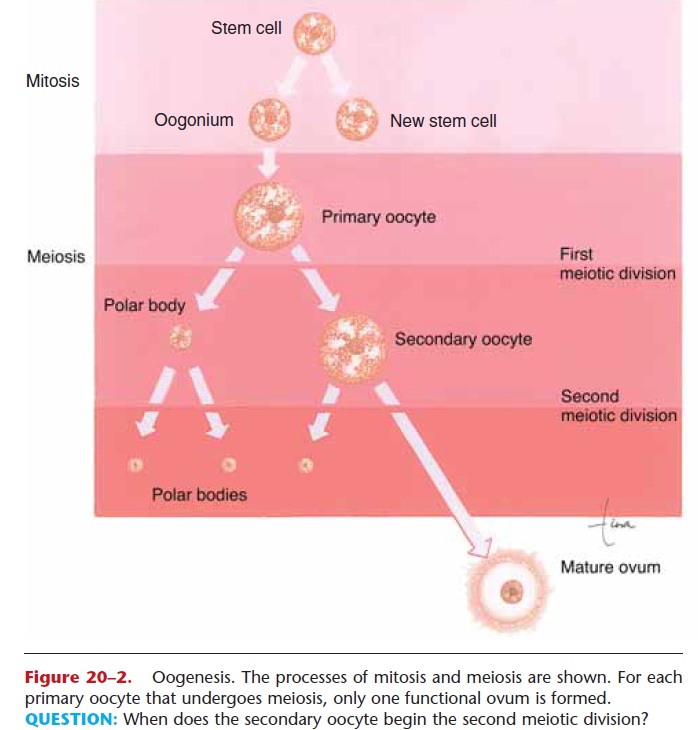 The production of ova begins at puberty (10 to 14 years of age) and continues until menopause (45 to 55 years of age), when the ovaries atrophy and no longer respond to pituitary hormones. During this 30- to 40-year span, egg production is cyclical, with a mature ovum being produced approximately every 28 days. Actually, several follicles usually begin to develop during each cycle. However, the rupturing (ovulation) of the first follicle to mature stops the growth of the others.

The process of meiosis is like other human proces-ses in that “mistakes” may sometimes occur. One of these, trisomy, is discussed.

The haploid egg and sperm cells produced by meiosis each have 23 chromosomes. When fertilization occurs, the nuclei of the egg and sperm merge, and the fertilized egg (zygote) has 46 chromosomes, the diploid number.

Thus, meiosis maintains the diploid number of the human species by reducing the number of chromosomes by half in the formation of gametes.