The medial longitudinal fasciculus is not a uniform fiber tract but contains different fiber systems that enter and exit at various levels.

The medial longitudinal fasciculus is not a uniform fiber tract but contains different fiber systems that enter and exit at various levels. It reaches from the rostral midbrain into the spinal cord and interconnects numerous nuclei of the brain stem. On cross sections through the brain stem, it is found in the middle of the tegmentum, ventrally from the central gray. 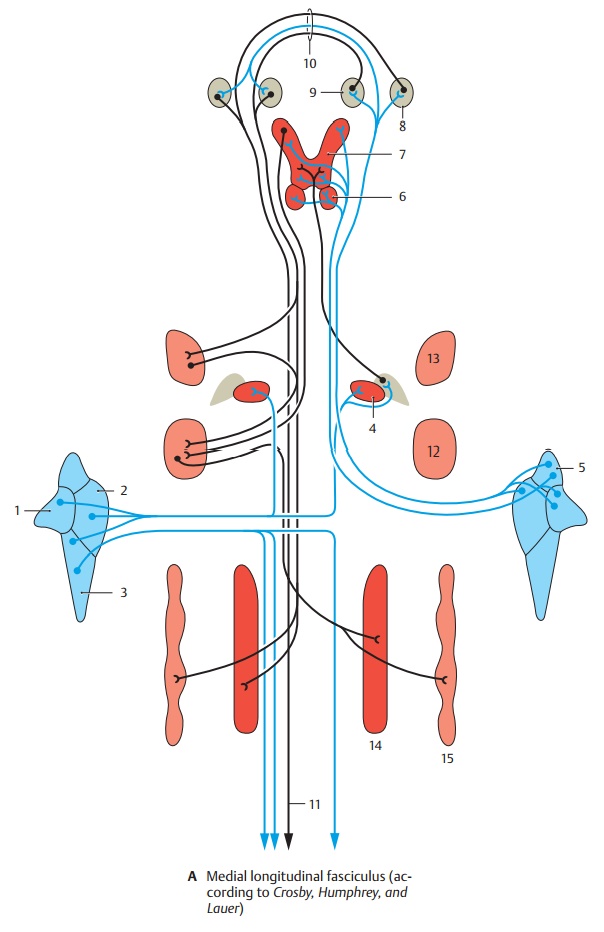 Vestibular part. Crossed and uncrossedfibers run in the longitudinal fasciculus from the lateral (A1), medial (A2), and infe-rior (A3) vestibular nuclei to the abducens nucleus (A4) and to the motor cells of the anterior horn of the cervical spinal cord. From the superior vestibular nucleus (A5), fibers ascend to the ipsilateral trochlear nu-cleus (A6) and oculomotor nucleus (A7). The vestibular fibers finally terminate in the ipsilateral or contralateral interstitial nu-cleus of Cajal (A8) and in Darkshevich’s nu-cleus (A9) (decussation of the epithalamic commissure [A10]). The longitudinal fasciculus connects the vestibular apparatus with the eye and neck muscles and with the extrapyramidal system.

The interconnections of motor nuclei of cranial nerves allow certain muscle groups to interact functionally, for example, during the coordination of eye muscles with themovements of the eyeball, coordination of eyelid muscles during opening and closing of the eyelids, and coordination of mastica-tory muscles and muscles of tongue and pharynx during swallowing and speaking.