Recent advances in the measurement of the molecular masses of proteins have made this technique an important analytical tool.

Recent advances in the measurement of the molecular masses of proteins have made this technique an important analytical tool. While this method was used in the past to analyze small volatile molecules, the molecular weights of highly charged proteins with masses of over 100 kilodaltons (kDa) can now be accurately determined.

Because of the precision of this method, post-translational modifications such as acetylation or glycosylation can be predicted. The masses of new protein forms that arise during stability studies provide information on the nature of this form. For example, an increase in mass of 16 Dalton suggests that an oxygen atom has been added to the protein as happens when a methionyl residue is oxidized to a methionyl sulfoxide residue. The molecular mass of peptides obtained after proteolytic digestion and separation by HPLC indicate from which region of the primary structure they are derived. Such HPLC chromatogram is called a “peptide map.” An example is shown in Figure 15. This is obtained by digesting a protein with pepsin and by subsequently separating the digested peptides by reverse HPLC. This highly characteristic pattern for a protein iscalled a “protein fingerprint.” Peaks are identified by elution times on HPLC. If peptides have molecular masses differing from those expected from the primary sequence, the nature of the modification to that peptide can be implicated. Moreover, molecular mass estimates can be made for peptides obtained from unfractionated pro-teolytic digests. Molecular masses that differ from expected values indicate that a part of the protein molecule has been altered, that glycosylation or another modification has been altered, or that the protein under investigation still contains contaminants.

Another way that mass spectrometry can be used as an analytical tool is in the sequencing of peptides. A recurring structure, the peptide bond, in peptides tends to yield fragments of the mature peptide which differ stepwise by an amino acyl residue. The difference in mass between two fragments indicates the amino acid removed from one fragment to generate the other. Except for leucine and isoleucine, each amino acid has a different mass and hence a sequence can be read from the mass spectrograph. Stepwise removal can occur from either the amino terminus or carboxy terminus. 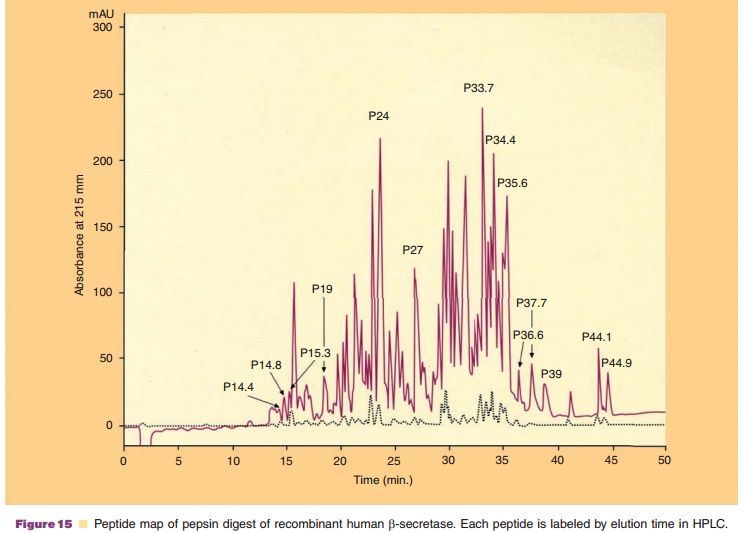 By changing three basic components of the mass spectrometer, the ion source, the analyzer and the detector, different types of measurement may be undertaken. Typical ion sources which volatilize the proteins are electrospray ionization (EI), fast atom bombardment and liquid secondary ion. Common analyzers include quadrupole, magnetic sector, and time of flight instruments. The function of the analyzer is to separate the ionized biomolecules based on their mass to charge ratio. The detector measures a current whenever impinged upon by charged particles. El and matrix-assisted laser desorption (MALDI) are two sources that can generate high molecular weight volatile proteins. In the former method, droplets are generated by spraying or nebulizing the protein solution into the source of the mass spectrometer. As the solvent evaporates, the protein remains behind in the gas phase and passes through the analyzer to the detector. In MALDI, proteins are mixed with a matrix which vaporizes when exposed to laser light, thus carrying the protein into the gas phase. An example of MALDI-mass analysis is shown in Fig. 16, indicating the singly charged ion (116118 Dalton) and the doubly charged ion (58036.2) for a purified protein. Since proteins are multi-charge compounds, a number of components are observed representing mass to charge forms, each differing from the next by one charge. By imputing various charges to the mass to charge values, a molecular mass of the protein can be estimated. The latter step is empirical since only the mass to charge ratio is detected and not the net charge for that particular particle. 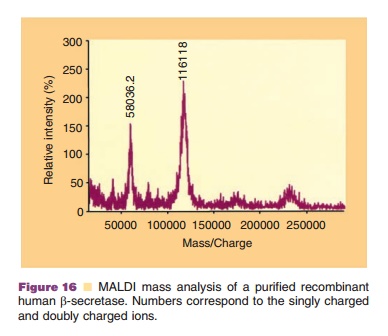