Blotting methods form an important niche in biotech-nology. They are used to detect very low levels of unique molecules in a milieu of proteins, nucleic acids, and other cellular components.

In one of the previous sections on “Techniques Specifically Suitable for Characterizing Folding” a number of (spectroscopic) techniques were mentioned that can be specifically used to monitor protein folding. These were: CD, FTIR, fluorescence spectroscopy, and DSC. Moreover, analytical ultracentrifugation and light scattering techniques were discussed in more detail. In this section other techniques will be discussed.

Blotting methods form an important niche in biotech-nology. They are used to detect very low levels of unique molecules in a milieu of proteins, nucleic acids, and other cellular components. They can detect aggregates or breakdown products occurring during long-term storage and they can be used to detect components from the host cells used in producing recombinant proteins.

Biomolecules are transferred to a membrane (“blotting”), and this membrane is then probed with specific reagents to identify the molecule of interest. Membranes used in protein blots are made of a variety of material including nitrocellulose, nylon, and polyvinylidine difluoride (PVDF), all of which avidly bind protein.

Liquid samples can be analyzed by methods called dot blots or slot blots. A solution containing the biomolecule of interest is filtered through a membrane which captures the biomolecule. The difference be-tween a dot blot and a slot blot is that the former uses a circular or disk format, while the latter is a rectangular configuration. The latter method allows for a more precise quantification of the desired biomolecule by scanning methods and relating the integrated results to that obtained with known amounts of material.

Often the sample is subjected to some type of fractionation, such as PAGE, prior to the blotting step. An early technique, Southern blotting, named after the discoverer, E.M. Southern, is used to detect DNA fragments. When this procedure was adapted to RNA fragments and to proteins, other compass coordinates were chosen as labels for these procedures, i.e., northern blots for RNA and western blots for proteins. Western blots involve the use of labeled antibodies to detect specific proteins.

Following PAGE, the transfer of proteins from the gel to the membrane can be accomplished in a number of ways. Originally, blotting was achieved by capillary action. In this commonly used method, the membrane is placed between the gel and absorbent paper. Fluid from the gel is drawn toward the absorbent paper and the protein is captured by the intervening membrane. A blot, or impression, of the protein within the gel is thus made.

The transfer of proteins to the membrane can occur under the influence of an electric field, as well. The electric field is applied perpendicularly to the original field used in separation so that the maximum distance the protein needs to migrate is only the thickness of the gel, and hence the transfer of proteins can occur very rapidly. This latter method is called electroblotting.

Once the transfer has occurred, the next step is to identify the presence of the desired protein. In addition to various colorimetric staining methods, the blots can be probed with reagents specific for certain proteins, as for example, antibodies to a protein of interest. This technique is called immuno-blotting. In the biotechnology field, immunoblotting is used as an identity test for the product of interest. An antibody that recognizes the desired protein is used in this instance. Secondly, immunoblotting is sometimes used to show the absence of host proteins. In this instance, the antibodies are raised against proteins of the organism in which the recombinant protein has been expressed. This latter method can attest to the purity of the desired protein. 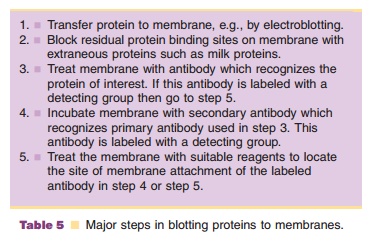 Table 5 lists major steps needed for the blotting procedure to be successful. Once the transfer of proteins is completed, residual protein binding sites on the membrane need to be blocked so that antibodies used for detection react only at the location of the target molecule, or antigen, and not at some non-specific location. After blocking, the specific antibody is incubated with the membrane. 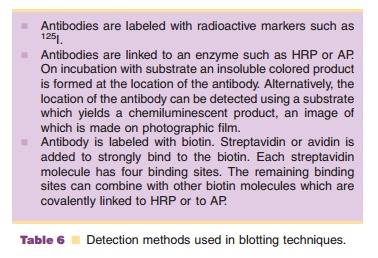 The antibody itself can be labeled with a radio-active marker such as 125I and placed in direct contact with X-ray film. After exposure of the membrane to the film for a suitable period, the film is developed and a photographic negative is made of the location of radioactivity on the membrane. Alternatively, the antibody can be linked to an enzyme which, upon the addition of appropriate reagents, catalyzes a color or light reaction at the site of the antibody. These procedures entail purification of the antibody and specifically label it. More often, “secondary” antibodies are used. The primary antibody is the one which recognizes the protein of interest. The secondary antibody is then an antibody that specifically recog-nizes the primary antibody. Quite commonly, the primary antibody is raised in rabbits. The secondary antibody may then be an antibody raised in another animal, such as goat, which recognizes rabbit anti-bodies. Since this secondary antibody recognizes rabbit antibodies in general, it can be used as a generic reagent to detect rabbit antibodies in a number of different