Although freshly isolated proteins may be folded into a distinct three-dimensional structure, this folded structure is not necessarily retained indefinitely in aqueous solution.

Although freshly isolated proteins may be folded into a distinct three-dimensional structure, this folded structure is not necessarily retained indefinitely in aqueous solution. The reason is that proteins are neither chemically nor physically stable. The protein surface is chemically highly heterogeneous and contains reactive groups. Long-term exposure of these groups to environmental stresses causes various chemical alterations. Many proteins, including growth factors and cytokines, have cysteine residues. If some of them are in a free or sulfhydryl form, they may undergo oxidation and disulfide exchange. Oxidation can also occur on methionyl residues. Hydrolysis can occur on peptide bonds and on amides of asparagine and glutamine residues. Other chemical modifications can occur on peptide bonds, tryptophan, tyrosine, and amino and carboxyl groups. Table 4 lists both a number of reactions that can occur during purification and storage of proteins and methods that can be used to detect such changes.

Physical stability of a protein is expressed as the difference in free energy, ∆GU, between the native and denatured states. Thus, protein molecules are in equilibrium between the above two states. As long as this unfolding is reversible and ∆GU is positive, it does not matter how small the ∆GU is. In many cases, this reversibility does not hold. This is often seen when ∆GU is decreased by heating. Most proteins denature upon heating and subsequent aggregation of the denatured molecules results in irreversible denaturation. Thus, unfolding is made irreversible by aggregation:

Therefore, any stress that decreases ∆GU and increases k will cause the accumulation of irreversibly inactivated forms of the protein. Such stresses may include chemical modifications as described above and physical parameters, such as pH, ionic strength, protein concentration, and temperature. Development of a suitable formulation that prolongs the shelf-life of a recombinant protein is essential when it is to be used as a human therapeutic.

When unfolding is irreversible due to aggregation, minimizing the irreversible step should increase the stability, and often this may be attained by the addition of mild detergents. Prior to selecting the proper detergent concentration and type, however, their effects on∆GU must be carefully evaluated. 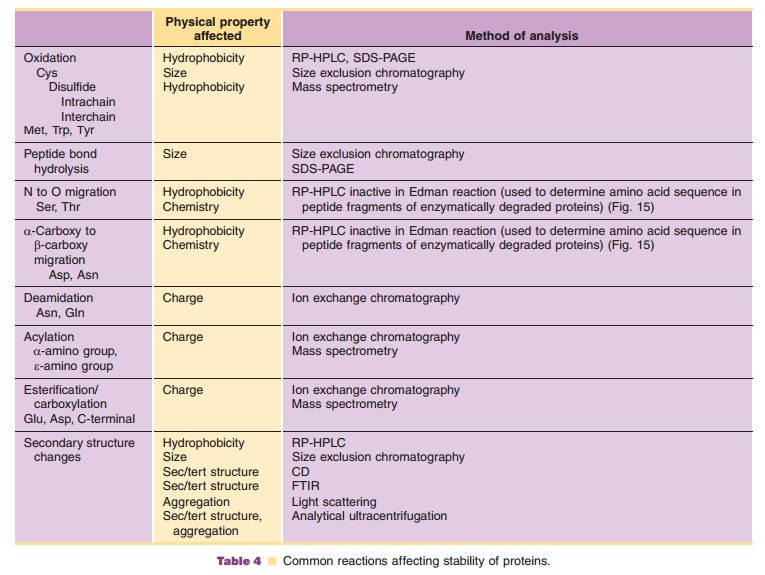 Another approach for enhancing storage stability of proteins is to lyophilize, or freeze-dry, the proteins. Lyophilization can minimize the aggregation step during storage, since both chemical modification and aggregation is reduced in the absence of water. The effects of a lyophilization process itself on ∆GU and k are not fully understoodand hence such a process must be optimized for each protein therapeutic.