Paramount to the development of a protein therapeu-tic is to have an assay that identifies its biological function.

Paramount to the development of a protein therapeutic is to have an assay that identifies its biological function. Chromatographic and electrophoretic methodologies can address the homogeneity of a biotherapeutic and be useful in investigating stability parameters. However, it is also necessary to ascertain whether the protein has acceptable bioactivity. Bioactivity can be determined either in vivo, i.e., by administering the protein to an animal and ascertain-ing some change within its body (function), or in vitro. Bioassays in vitro monitor the response of a specific receptor or microbiological or tissue cell line when the therapeutic protein is added to the system. An example of an in vitro bioassay is the increase in DNA synthesis in the presence of the therapeutic protein as measured by the incorporation of radio-actively labeled thymidine. The protein factor binds to receptors on the cell surface that triggers secondary messengers to send signals to the cell nucleus to synthesize DNA. The binding of the protein factor to the cell surface is dependent upon the amount of factor present. Figure 14 presents a dose response curve of thymidine incorporation as a function of concentration of the factor. At low concentrations, the factor is too low to trigger a response. As the concentration increases, the incorporation of thymidine occurs, and at higher concentrations the amount of thymidine incorporation ceases to increase as DNA synthesis is occurring at the maximum rate. A standard curve can be obtained using known quantities of the protein factor. Comparison of other solutions containing unknown amounts of the factor with this standard curve will then yield quantitative estimates of the factor concentration. Through experience during the development of the protein therapeutic, a value is obtained for a fully functional protein. Subsequent comparisons to this value can be used to ascertain any loss in activity during stability studies, or changes in activity when amino acyl residues of the protein are modified. Other in vitro bioassays can measure changes in cell number or production of another protein factor in response to the stimulation of cells by the protein therapeutic. The amount of the secondary protein produced can be estimated by using an ELISA. 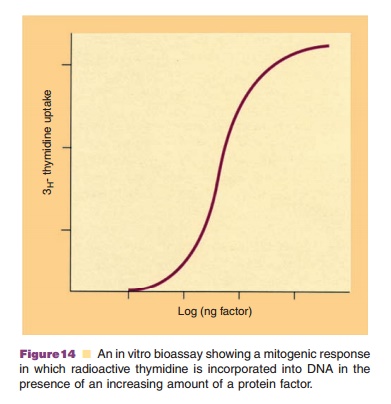