Most proteins which are developed for therapy perform specific functions by interacting with other small and large molecules, e.g., cell surface receptors, binding proteins, nucleic acids, carbohydrates and lipids.

Most proteins which are developed for therapy perform specific functions by interacting with other small and large molecules, e.g., cell surface receptors, binding proteins, nucleic acids, carbohydrates and lipids. The functional properties of proteins are derived from their folding into distinct three-dimensional structures. Each protein fold is based on its specific polypeptide sequence in which differ-ent amino acids are connected through peptide bonds in a specific way. This alignment of the 20 amino acids, called a primary sequence, has in general all the information necessary for folding into a distinct tertiary structure comprising different secondary structures such as α-helices and β-sheets (see below). Because the 20 amino acids possess different side chains, polypeptides with widely diverse properties are obtained. 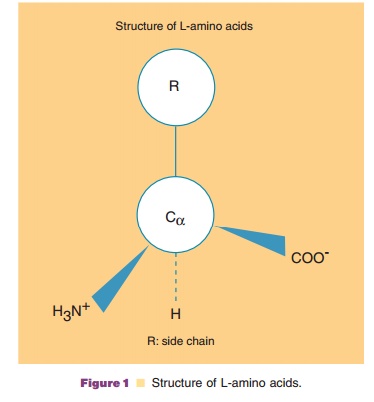 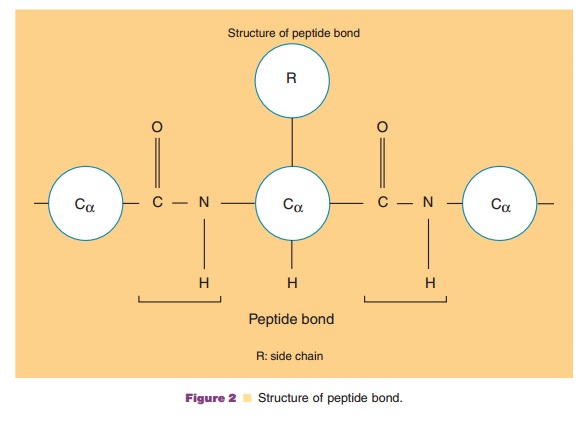 The condensation gives an amide group, NH, at the N-terminal side of Ca, and a carbonyl group, C¼O, at the C-terminal side. These groups, as well as the amino acyl side chains, play important roles in protein folding. Due to their ability to form hydrogen bonds, they make major energetic contributions to the formation of two important secondary structures, α-helix and β-sheet. The peptide bonds betweenvarious amino acids are very much equivalent, however, so that they do not determine which part of a sequence should form an α-helix or β-sheet. Sequence-dependent secondary structure formation is determined by the side chains. 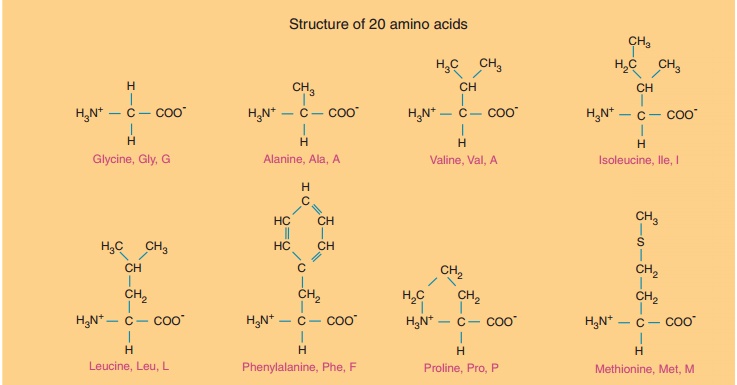 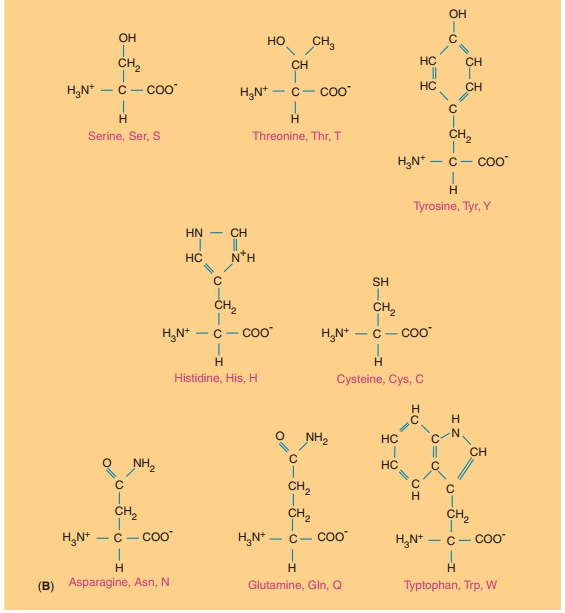 Polar amino acids consist of serine, threonine, asparagine, and glutamine, as well as cysteine, while nonpolar amino acids consist of alanine, valine, phenylalanine, proline, methionine, leucine, and iso-leucine. Glycine behaves neutrally while cystine, the oxidized form of cysteine, is characterized as hydro-phobic. Although tyrosine and tryptophan often enter into polar interactions, they are better characterized as nonpolar, or hydrophobic, as described later.

These twenty amino acids are incorporated into a unique sequence based on the genetic code, as the example in Figure 4 shows. This is an amino acid sequence of granulocyte-colony stimulating factor (G-CSF), which selectively regulates proliferation and maturation of neutrophils. Although the exact properties of this protein depend on the location of each amino acid and hence the location of each side chain in the three-dimensional structure, the average properties can be estimated simply from the aminoacid composition, as shown in Table 1; i.e., a list of the total number of each type of amino acid contained in this protein molecule.

Using the pKa values of these side chains and one amino and carboxyl terminus, one can calculate total charges (positive plus negative charges) and net charges (positive minus negative charges) of a protein as a function of pH, i.e., a titration curve. Since cysteine can be oxidized to form a disulfide bond or can be in a free form, accurate calculation above pH 8 requires knowledge of the status of cysteinyl residues in the protein. The titration curve thus obtained is only an approximation, since some charged residues may be buried and the effective pKa values depend on the local environment of each residue. Nevertheless, the calcu-lated titration curve gives a first approximation of the overall charged state of a protein at a given pH and hence its solution property. Other molecular para-meters, such as isoelectric point (pI; where the net charge of a protein becomes zero), molecular weight, extinction coefficient, partial specific volume and hydrophobicity, can also be estimated from the amino acid composition, as shown in Table 1. 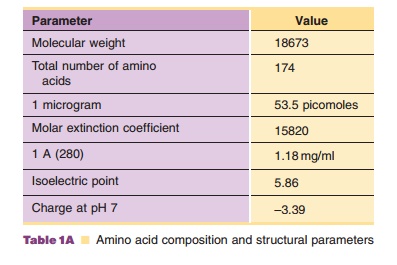 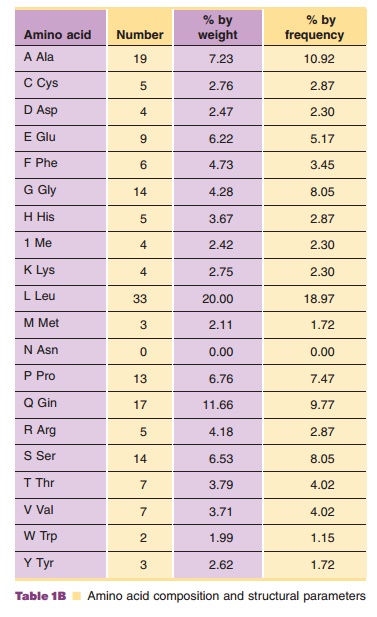 The primary structure of a protein, i.e., the sequence of the twenty amino acids, can lead to the three-dimensional structure because the amino acids have diverse physical properties. First, each type of amino acid has the tendency to be more preferentially incorporated into certain secondary structures. The frequencies with which each amino acid is found in a-helix, β-sheet and β-turn, secondary structures that are discussed later in this chapter, can be calculated as an average over a number of proteins whose three-dimensional structures have been solved. These frequencies are listed in Table 2. The ß-turn has a distinct configuration consisting of four sequential amino acids and there is a strong preference for specific amino acids in these four positions. For example, asparagine has an overall high frequency of occurrence in a ß-turn and is most frequently observed in the first and third position of a ß-turn. This characteristic of asparagine is consistent with its side chain being a potential site of N-linked glycosylation. Effects of glycosylation on the biological and physicochemical properties of proteins are extremely important; however, their contribution to structure is not readily predictable based on the amino acid composition. 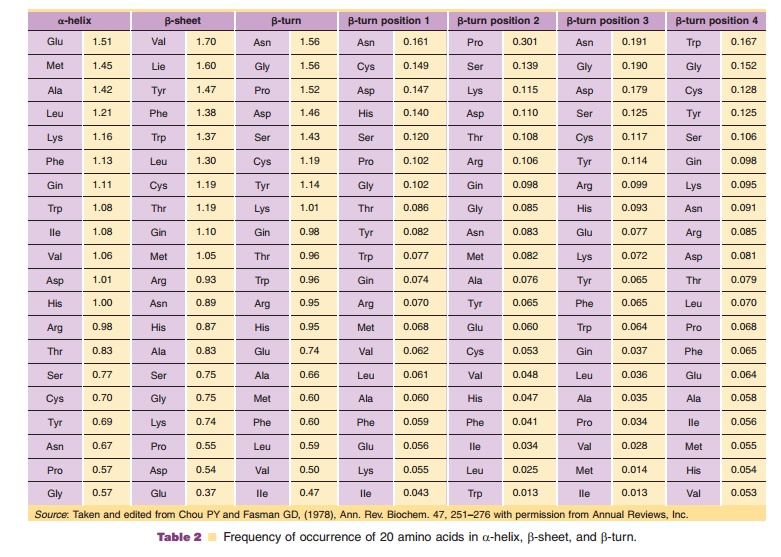 Based on these frequencies, one can predict for particular polypeptide segments which type of secondary structure they are likely to form. As shown in Figure 5A, there are a number of methods developed to predict the secondary structure from the primary sequence of the proteins. Using G-CSF (Fig. 5B) as an example, regions of α-helix, ß-sheets, turns, hydrophilicity, and antigen sites can be suggested. 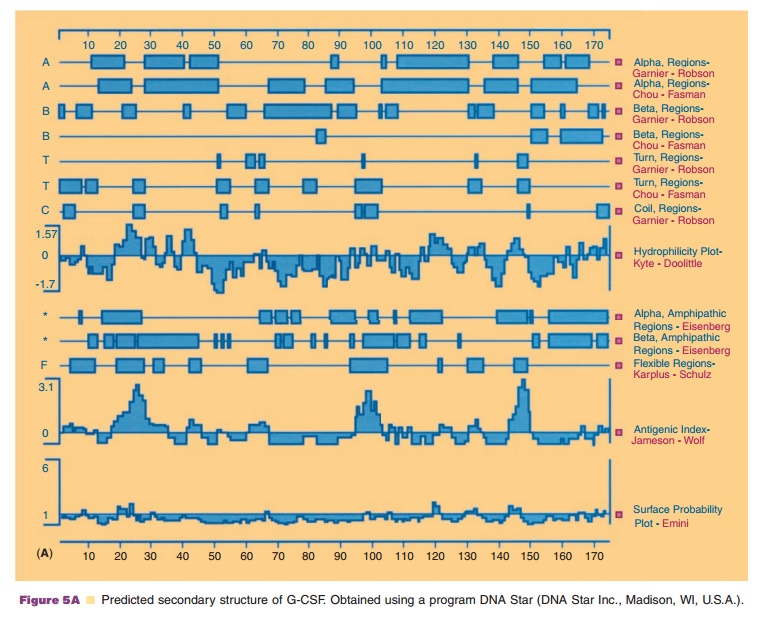 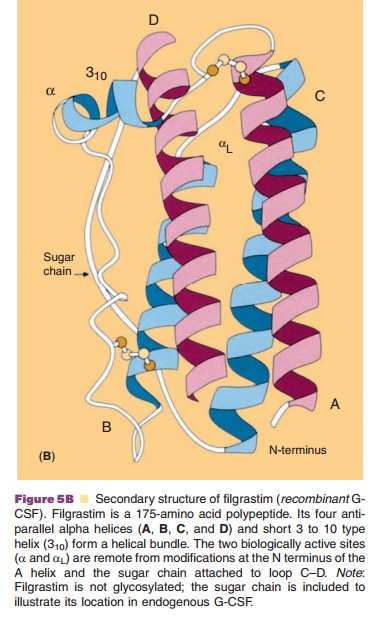