A magnitude comparator is a combinational circuit that compares two given numbers and determines whether one is equal to, less than or greater than the other.

A magnitude comparator is a combinational circuit that compares two given numbers and determines whether one is equal to, less than or greater than the other. The output is in the form of three binary variables representing the conditions A = B_A>B and A<B, if A and B are the two numbers being compared. Depending upon the relative magnitude of the two numbers, the relevant output changes state. If the two numbers, let us say, are four-bit binary numbers and are designated as (A3 A2 A1 A0) and (B3 B2 B1 B0), the two numbers will be equal if all pairs of significant digits are equal, that is, A3= B3, A2 = B2, A1= B1 and A0 = B0. In order to determine whether A is greater than or less than B we inspect the relative magnitude of pairs of significant digits, starting from the most significant position. The comparison is done by successively comparing the next adjacent lower pair of digits if the digits of the pair under examination are equal. The comparison continues until a pair of unequal digits is reached. In the pair of unequal digits, if Ai = 1 and Bi = 0, then A > B, and if Ai = 0, Bi= 1 then A < B. If X, Y and Z are three variables respectively representing the A = B, A > B and A < B conditions, then the Boolean expression representing these conditions are given by the equations

Magnitude comparators are available in IC form. For example, 7485 is a four-bit magnitude comparator of the TTL logic family. IC 4585 is a similar device in the CMOS family. 7485 and 4585 have the same pin connection diagram and functional table. The logic circuit inside these devices determines whether one four-bit number, binary or BCD, is less than, equal to or greater than a second four-bit number. It can perform comparison of straight binary and straight BCD (8-4-2-1) codes. These devices can be cascaded together to perform operations on larger bit numbers without the help of any external gates. This is facilitated by three additional inputs called cascading or expansion inputs available on the IC. These cascading inputs are also designated as A = B, A > B and A < B inputs. Cascading of individual magnitude comparators of the type 7485 or 4585 is discussed in the following paragraphs. IC 74AS885 is another common magnitude comparator. The device is an eight bit magnitude comparator belonging to the advanced Schottky TTL family. It can perform high-speed arithmetic or logic comparisons on two eight-bit binary or 2‘s complement numbers and produces two fully decoded decisions at the output about one number being either greater than or less than the other. More than one of these devices can also be connected in a cascade arrangement to perform comparison of numbers of longer lengths. 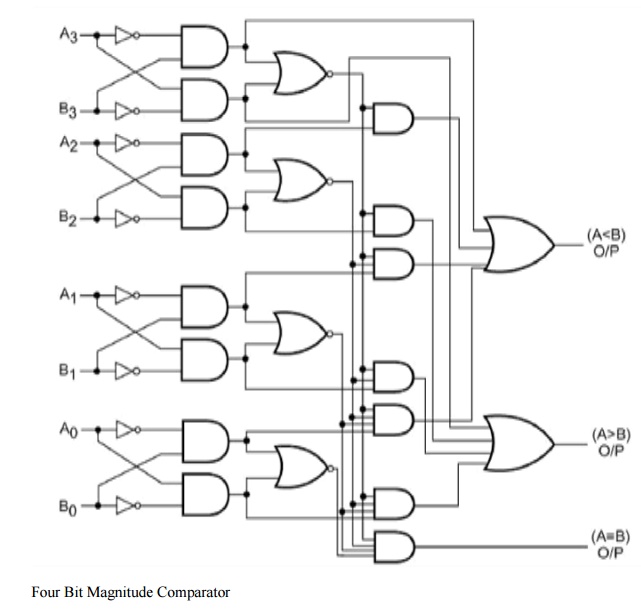