Immune system of an organism consists of several structurally and functionally different organs and tissues that are widely dispersed in the body.

Immune system of an organism consists of several structurally and functionally different organs and tissues that are widely dispersed in the body. The organs involved in the origin, maturation and proliferation of lymphocytes are called lymphoid organs (Fig. 8.3). Based on 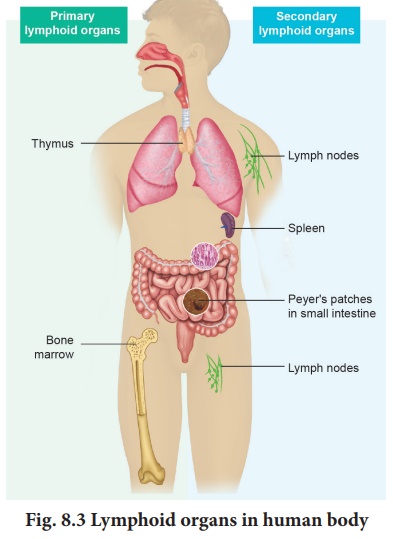 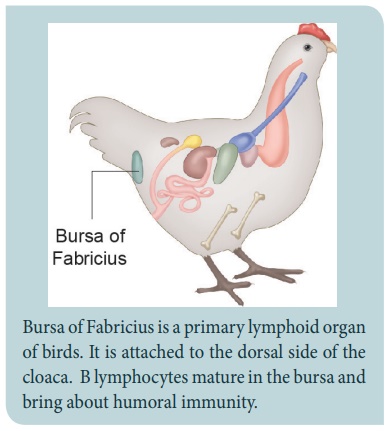 Bursa of Fabricius of birds, bone marrow and thymus gland of mammals constitute the primary lymphoid organs involved in the production and early selection of lymphocytes. These lymphocytes become dedicated to a particular antigenic specificity. Only when the lymphocytes mature in the primary lymphoidal organs, they become immunocompetent cells. In mammals, B cell maturation occurs in the bone marrow and T cells maturation occurs in the thymus.

The thymus is a flat and bilobed organ located behind the sternun, above the heart. Each lobe of the thymus contains numerous lobules, separated from each other by connective tissue called septa. Each lobule is differentiated into two compartments, the outer compartment or outer cortex, is densely packed with immature T cells called thymocytes, whereas the inner compartment or medulla is sparsely populated with thymocytes. One of its main secretions is the hormone thymosin. It stimulates the T cell to become mature and immunocompetent. By the early teens, the thymus begins to atrophy and is replaced by adipose tissue (Fig. 8.4). Thus thymus is most active during the neonatal and pre-adolescent periods. 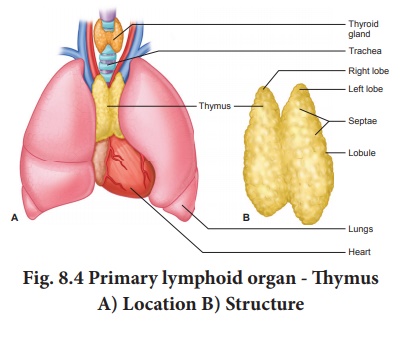 Bone marrow is a lymphoid tissue found within the spongy portion of the bone. Bone marrow contains stem cells known as haematopoietic cells. These cells have the potential to multiply through cell division and either remain as stem cells or differentiate and mature into different kinds of blood cells.

Peyer’s patches are oval-shaped areas of thickened tissue that are embedded in the mucus-secreting lining of the small intestine of humans and other vertebrate animals. Peyer’s patches contain a variety of immune cells, including macrophages, dendritic cells, T cells, and B cells.

The tonsils (palatine tonsils) are a pair of soft tissue masses located at the back of the throat (pharynx). The tonsils are part of the lymphatic system, which help to fight infections. They stop invading germs including bacteria and viruses.

Spleen is a secondary lymphoid organ located in the upper part of the abdominal cavity close to the diaphragm. Spleen contains B and T cells. It brings humoral and cell mediated immunity.

Lymph node is a small bean-shaped structure and is part of the body’s immune system. It is the first one to encounter the antigen that enters the tissue spaces. Lymph nodes filter and trap substances that travel through the lymphatic fluid. They are packed tightly with white blood cells, namely lymphocytes and macrophages. There are hundreds of lymph nodes found throughout the body. They are connected to one another by lymph vessels. Lymph is a clear, transparent, colourless, mobile and extracellular fluid connective tissue. As the lymph percolates through the lymph node, the particulate antigen brought in by the lymph will be trapped by the phagocytic cells, follicular and interdigitating dendritic cells. 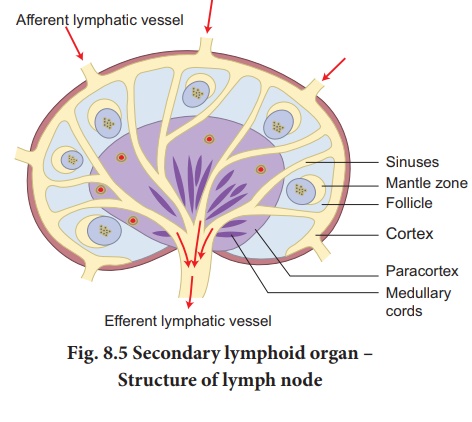 Lymph node has three zones (Fig. 8.5). They are the cortex, paracortex and medulla. The outer most layer of the lymph node is called cortex, which consists of B-lymphocytes, macrophages, and follicular dendritic cells. The paracortex zone is beneath the cortex, which is richly populated by T lymphocytes and interdigitating dendritic cells. The inner most zone is called the medulla which is sparsely populated by lymphocytes, but many of them are plasma cells, which actively secrete antibody molecules. As the lymph enters, it slowly percolates through the cortex, paracortex and medulla, giving sufficient chance for the phagocytic cells and dendritic cells to trap the antigen brought by the lymph. The lymph leaving a node carries enriched antibodies secreted by the medullary plasma cells against the antigens that enter the lymph node. Sometimes visible swelling of lymph nodes occurs due to active immune response and increased concentration of lymphocytes. Thus swollen lymph nodes may signal an infection. There are several groups of lymph nodes. The most frequently enlarged lymph nodes are found in the neck, under the chin, in the armpits and in the groin.

The mucosa-associated lymphoid tissue (MALT) is a diffuse system of small concentrations of lymphoid tissue in the alimentary, respiratory and urino-genital tracts. MALT is populated by lymphocytes such as T and B cells, as well as plasma cells and macrophages, each of which is well situated to encounter antigens passing through the mucosal epithelium.

Bronchus Associated Lymphoid Tissues (BALT) also a component of MALT is made of lymphoid tissue (tonsils, lymph nodes, lymph follicles) is found in the respiratory mucosae from the nasal cavities to the lungs.

Cells of the immune system

The immune system is composed of many interdependent cells that protect the body from microbial infections and the growth of tumour cells. The cellular composition of adult human blood is given in Table 8.4. 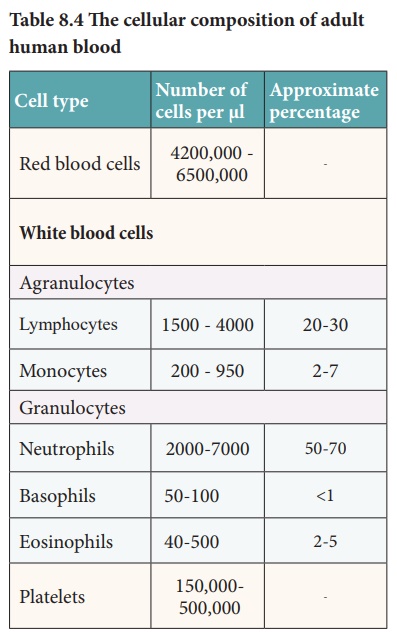 All these cells are derived from pluripotent haematopoetic stem cells. Each stem cell has the capacity to produce RBC, WBC and platelets.

The only cells capable of specifically recognising and producing an immune response are the lymphocytes. The other types of white blood cells play an important role in non specific immune response, antigen presentation and cytokine production.

About 20-30% of the white blood cells are lymphocytes. They have a large nucleus filling most of the cell, surrounded by a little cytoplasm. The two main types of lymphocytes are B and T lymphocytes. Both these are produced in the bone marrow. B lymphocytes (B cells) stay in the bone marrow until they are mature. Then they circulate around the body. Some remain in the blood, while others accumulate in the lymph nodes and spleen. T lymphocytes leave the bone marrow and mature in the thymus gland. Once mature, T cells also accumulate in the same areas of the body as B cells. Lymphocytes have receptor proteins on their surface. When receptors on a B cell bind with an antigen, the B cell becomes activated and divides rapidly to produce plasma cells. The plasma cells produce antibodies. Some B cells do not produce antibodies but become memory cells. These cells are responsible for secondary immune response. T lymphocytes do not produce antibodies. They recognize antigen-presenting cells and destroy them. The two important types of T cells are Helper T cells and Killer T cells. Helper T cells release a chemical called cytokine which activates B cells. Killer cells move around the body and destroy cells which are damaged or infected (Fig. 8.6).

Apart from these cells neutrophils and monocytes destroy foreign cells by phagocytosis. Monocytes when they mature into large cells, they are called macrophages which perform phagocytosis on any foreign organism.

Dendritic cells are called so because its covered with long, thin membrane extensions that resemble dendrites of nerve cells. These cells present the antigen to T-helper cells. Four types of dendritic cells are known. They are langerhans, interstitial cells, myeloid and lymphoid cells 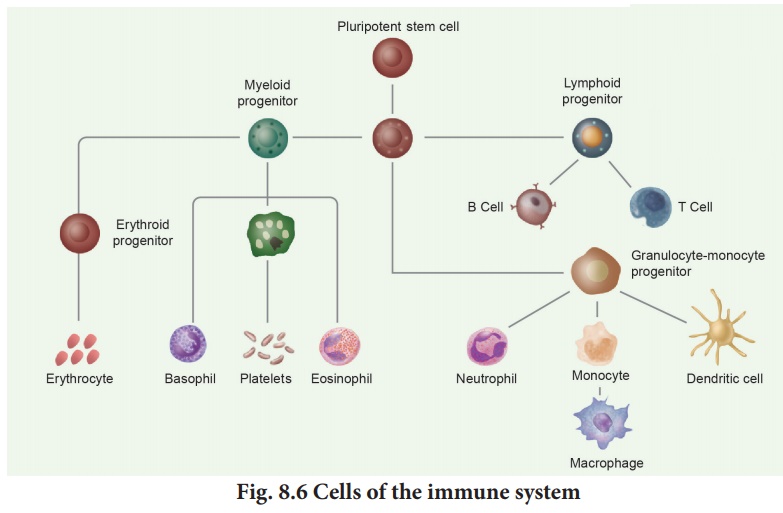