Antibodies are immunoglobulin (Ig) protein molecules synthesized on exposure to antigen that can combine specifically with the antigen.

Antibodies are immunoglobulin (Ig) protein molecules synthesized on exposure to antigen that can combine specifically with the antigen. Whenever pathogens enter our body, the B-lymphocytes produce an army of proteins called antibodies to fight with them. Thus, they are secreted in response to an antigen (Ag) by the effect of B cells called plasma cells. The antibodies are classified into five major categories, based on their physiological and biochemical properties. They are IgG (gamma), IgM (mu), IgA (alpha), IgD (delta) and IgE (epsilon).

In the 1950s, experiments by Porter and Edelman revealed the basic structure of the immunoglobulin. An antibody molecule is Y shaped structure that comprises of four polypeptide chains, two identical light chains (L) of molecular weight 25,000 Da (approximately 214 amino acids) and two identical heavy chains (H) of molecular weight 50,000 Da (approximately 450 amino acids). The polypeptide chains are linked together by di-sulphide (S-S) bonds. One light chain is attached to each heavy chain and two heavy chains are attached to each other to form a Y shaped (Fig. 8.7) structure. Hence, an antibody is represented by H2 L2. The heavy chains have a flexible hinge region at their approximate middles. 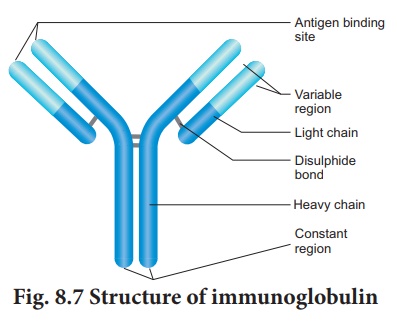 Each chain (L and H) has two terminals. They are C - terminal (Carboxyl) and amino or N-terminal. Each chain (L and H) has two regions. They have variable (V) region at one end and a much larger constant (C) region at the other end. Antibodies responding to different antigens have very different regions but their (C) regions are the same in all antibodies. In each arm of the monomer antibody, the (V) regions of the heavy and light chains combines to form an antigen – binding site shaped to ‘fit’ a specific antigenic determinant. Consequently each antibody monomer has two such antigen – binding regions. The (C) regions that forms the stem of the antibody monomer determine the antibody class and serve common functions in all antibodies.

The functions of immunoglobulin are agglutination, precipitation, opsonisation, neutralization etc.,