Immunodeficiency results from the failure of one or more components of the immune system.

Immunodeficiency results from the failure of one or more components of the immune system. Primary immune deficiencies are caused by genetic developmental defects. Secondary immune deficiencies arise due to various reasons like radiation, use of cytolytic and immunosuppressive drugs and infections. AIDS is an acronym for Acquired Immuno Deficiency Syndrome. It is the deficiency of immune system, acquired during the life time of an individual indicating that it is not a congenital disease. AIDS is caused by Human Immuno Deficiency Virus (HIV). It selectively infects helper T cells. The infected helper T cells will not stimulate antibody production by B-cells resulting in loss of natural defence against viral infection. On the basis of genetic characteristics and differences in the viral antigens, HIV is classified into the types 1 and 2 (HIV-1, HIV-2).

The human immunodeficiency virus belongs to the genus Lentivirus. When observed under the electron microscope, HIV is seen as a spherical virus, 100-120 nm in diameter, containing a dense core surrounded by a lipoprotein envelope. The envelope has glycoprotein (gp) spikes termed gp 41 and gp 120. At the core, there are two large single stranded RNA. Attached to the RNA are molecules of reverse transcriptase. It also contains enzymes like protease and ribonuclease. The core is covered by a capsid made of proteins. This is followed by another layer of matrix proteins as shown in the Fig 8.10. 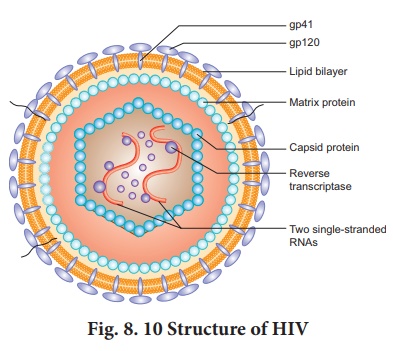 The HIV is often located within the cells especially in macrophages. HIV can survive for 1.5 days inside a cell but only about 6 hours outside a cell. Routes of HIV transmission include unsafe sexual contact, blood-contaminated needles, organ transplants, blood transfusion and vertical transmission from HIV infected mother to child. HIV is not transmitted by insects or by casual contact.

After getting into the body of the person, the virus enters into macrophages where RNA genome of the virus replicates to form viral DNA with the help of the enzyme reverse transcriptase. This viral DNA gets incorporated into the DNA of host cells and directs the infected cells to produce viral particles. The macrophages continue to produce virus and in this way acts like a HIV factory. Simultaneously, HIV enters into helper T-lymphocytes, replicates and produces progeny viruses. The progeny viruses released in the blood attack other helper T-lymphocytes. This is repeated, leading to a progressive decrease in the number of helper T lymphocytes in the body of the infected person. During this period, the person suffers from bouts of fever, diarrhoea and weight loss. Due to decrease in the number of helper T lymphocytes, the person starts suffering from infections and becomes immune deficient and unable to protect against any infection.

A simple blood test is available that can determine whether the person has been infected with HIV. The ELISA test (Enzyme Linked ImmunoSorbent Assay) detects the presence of HIV antibodies. It is a preliminary test. Western blot test is more reliable and a confirmatory test. It detects the viral core proteins. If both tests detect the presence of the antibodies, the person is considered to be HIV positive.

AIDS has no cure. Prevention of AIDS is the best option. Advocating safe sex and promoting regular check-up, safe blood for transfusion, use of disposable needles, use of condoms during sexual contact, prevention of drug abuse, AIDS awareness programme by NACO (National AIDS Control Organisation), NGOs (Non-Governmental Organisations) and WHO are to prevent the spreading of AIDS.