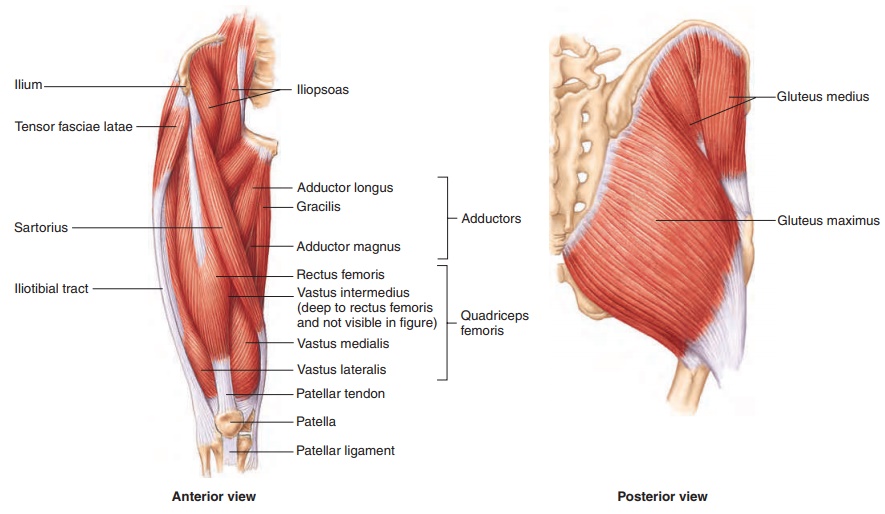 The muscles of the lower limb include those located in the hip, the thigh, the leg, and the foot.

The muscles of the lower limb include those located in the hip, the thigh, the leg, and the foot.

Several hip muscles originate on the coxal bone and insert onto the femur (figure 7.26 and table 7.16). The anterior muscle, the iliopsoas (il′ē-ō-sō′ŭs), flexes the hip (figure 7.26a). The posteriorand lateral hip muscles consist of the gluteal muscles and the tensor fasciae latae. The tensor fasciae latae (ten′sōr fa′shē-ă la′tē) is so named because it tenses a thick band of fascia on the lateral side of the thigh called the iliotibial tract. By so doing, it helps steady the femur on the tibia when a person is standing. The gluteus (glū′tē-us; buttock) maximus, which extends the hip and abducts and later-ally rotates the thigh, contributes most of the mass that can be seen as the buttocks. The gluteus medius, which abducts and medially rotates the thigh, creates a smaller mass just superior and lateral to the maximus (see figure 7.27b). The gluteus maximus functions optimally to extend the hip when the thigh is flexed at a 45-degree angle. The gluteus medius is a common site for injections in the buttocks because the sciatic nerve lies deep to the gluteus maximus and could be damaged during an injection. 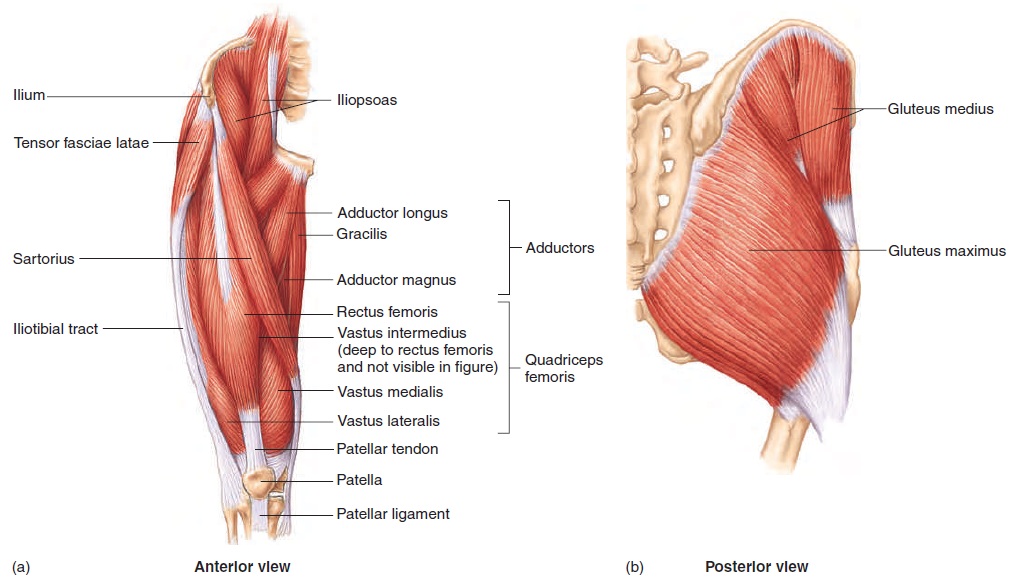 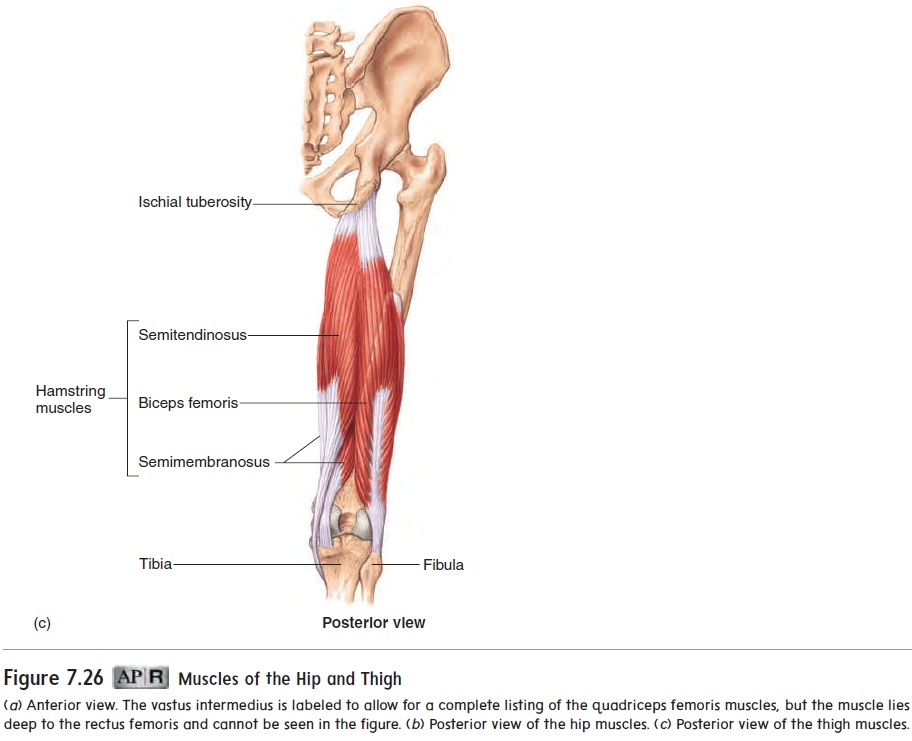 The anterior thigh muscles are the quadriceps femoris (kwah′dri-seps fe-mōr ′is; four muscles) and the sartorius (sar-tōr′ē-ŭs) (table 7.17; figures 7.26a and 7.27a). The quadriceps femoris muscles are the primary extensors of the knee. They have a common insertion, the patellar tendon, on and around the patella. The patel-lar ligament is an extension of the patellar tendon onto the tibial tuberosity. The patellar ligament is tapped with a rubber hammer when testing the knee-jerk reflex in a physical examination (see figure 8.18). Health professionals often use one of the quadriceps muscles, the vastus lateralis, as an intermuscular injection site. The sartorius, the longest muscle in the body, is called the “tailor’s muscle” because it flexes the hip and knee and rotates the thigh laterally for sitting cross-legged, as tailors used to sit while sewing.

The posterior thigh muscles are called hamstring muscles, and they are responsible for flexing the knee (table 7.17; see fig-ures 7.14b and 7.26c). Their tendons are easily felt and seen on the medial and lateral posterior aspect of a slightly bent knee (fig-ure 7.27b). The hamstrings are so named because these tendons in hogs or pigs could be used to suspend hams during curing 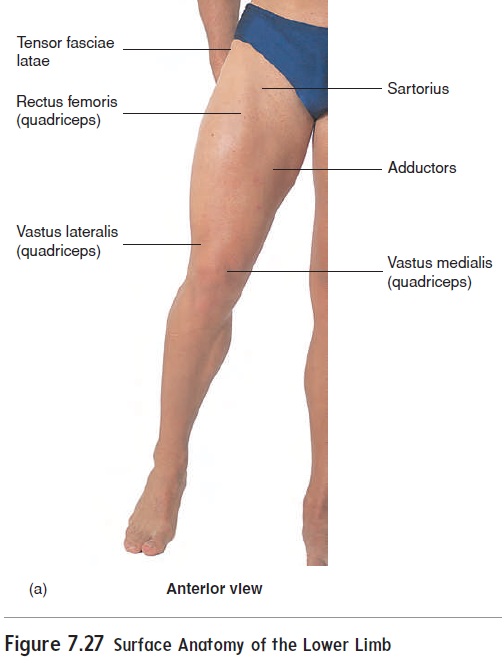 Animals such as wolves often bring down their prey by biting through the hamstrings, thus preventing the prey animal from run-ning. “To hamstring” someone is therefore to render him or her helpless. A “pulled hamstring” results from tearing one or more of these muscles or their tendons, usually where the tendons attach to the coxal bone.

The medial thigh muscles, the adductor (a′dŭk-ter) muscles, are primarily involved, as the name implies, in adducting the thigh (table 7.17).

The thirteen muscles in the leg, with tendons extending into the foot, can be divided into three groups: anterior, posterior, and lateral. As with the forearm, only the most superficial muscles are illustrated in figure 7.28 and listed in table 7.18. The anterior muscles (figure 7.28a) are extensor muscles involved in dorsiflex-ion (extension) of the foot and extension of the toes. 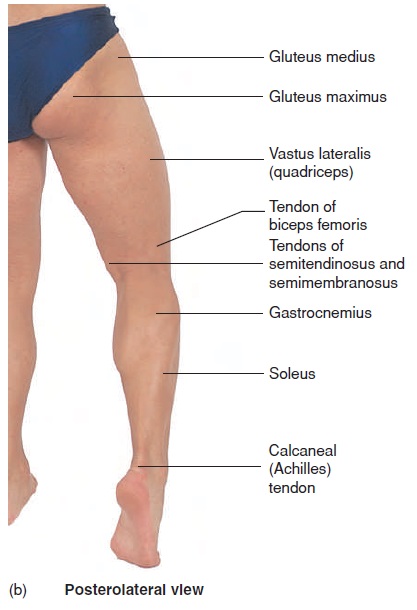 The superficial muscles of the posterior compartment of the leg (figure 7.28b), the gastrocnemius (gas′trok-nē′mē-us) and the soleus (sō′lē-ŭs), form the bulge of the calf (posterior leg; figure 7.28b). They join to form the common calcaneal (kal-kā′nē-ăl; heel) tendon, or Achilles tendon. These muscles are flexors and are involved in plantar flexion of the foot. The deep muscles of the posterior compartment plantar flex and invert the foot and flex the toes. 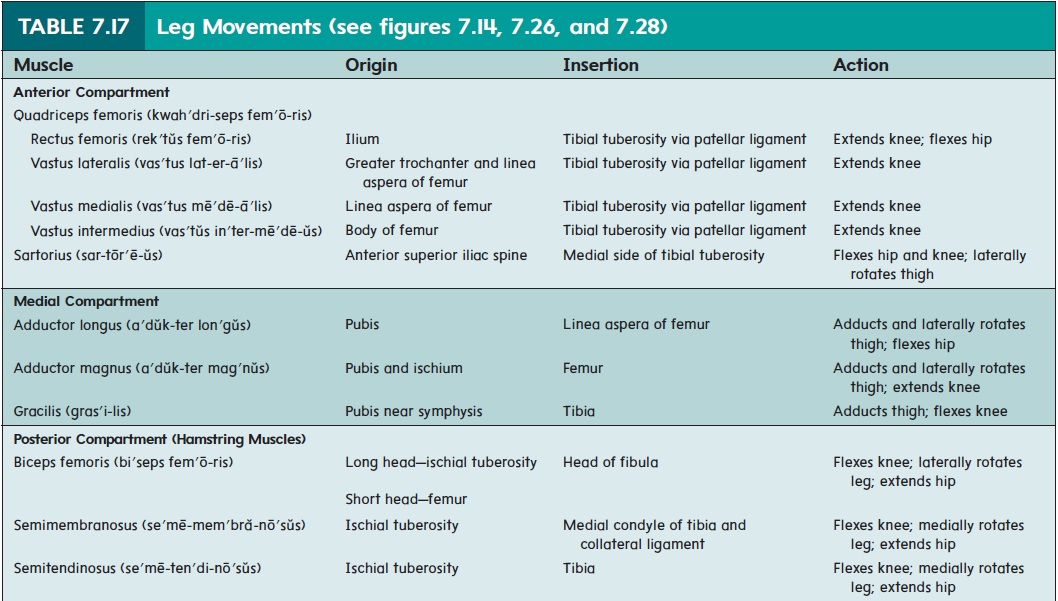 The lateral muscles of the leg, called the fibularis (fib-ū-lā′ris) muscles (figure 7.28c), are primarily everters (turning the lateral sideof the foot outward) of the foot, but they also aid in plantar flexion.

The twenty muscles located within the foot, called the intrinsic foot muscles, flex, extend, abduct, and adduct the toes.They are arranged in a manner similar to the intrinsic muscles of the hand. 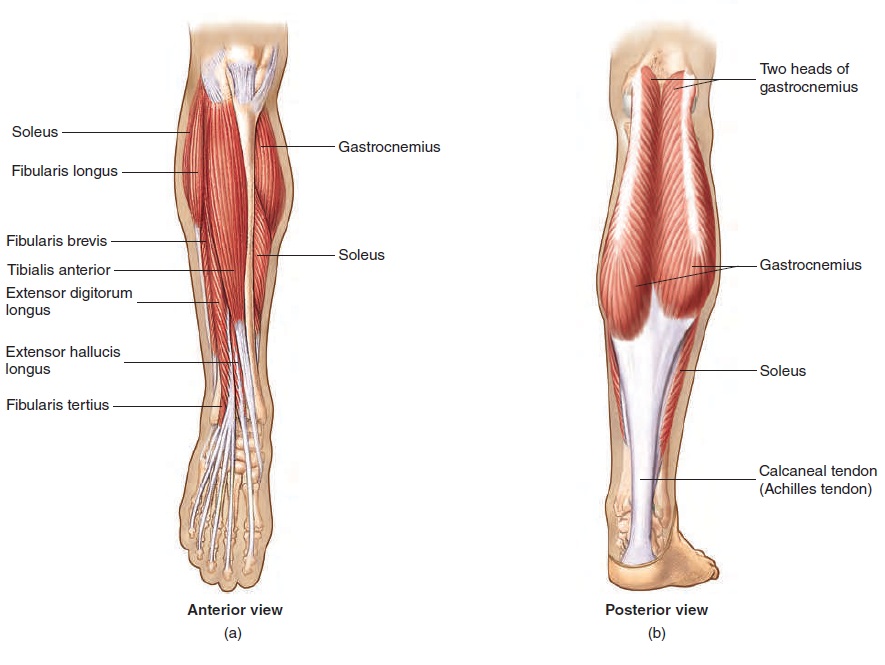 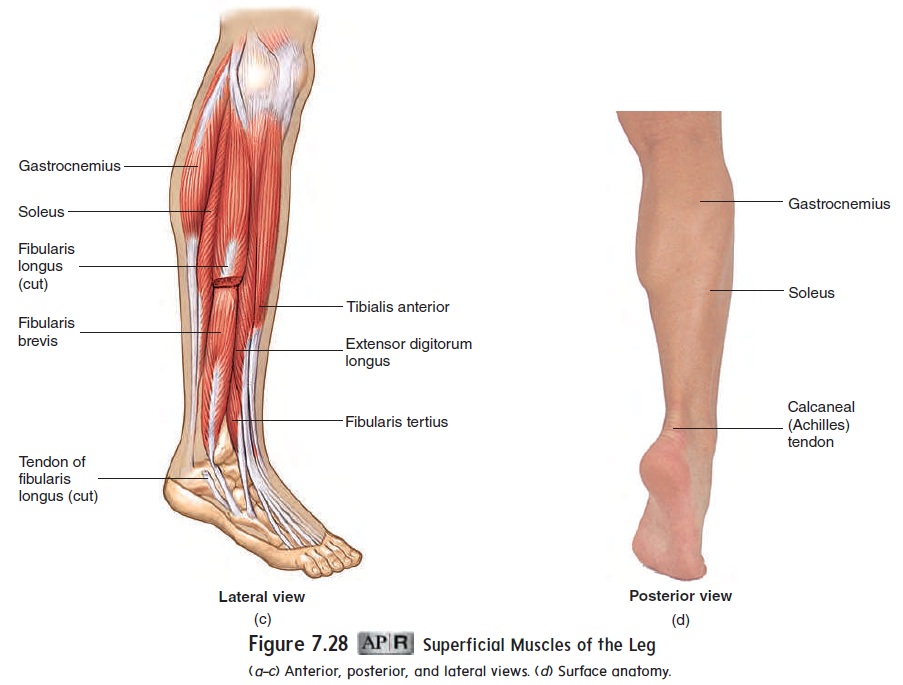 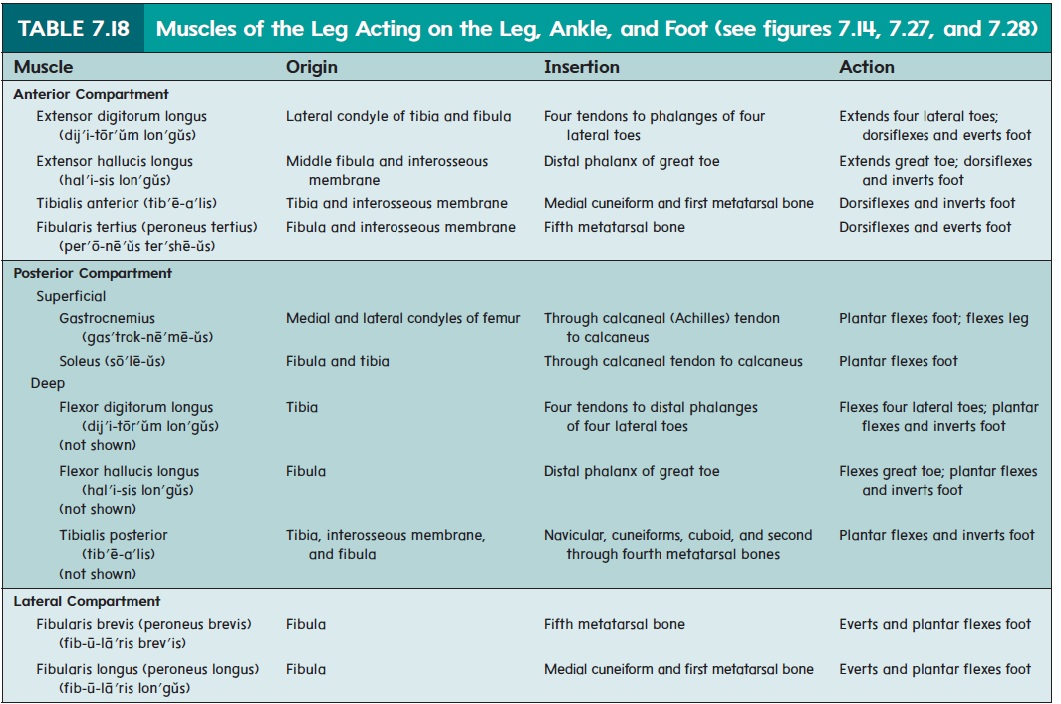 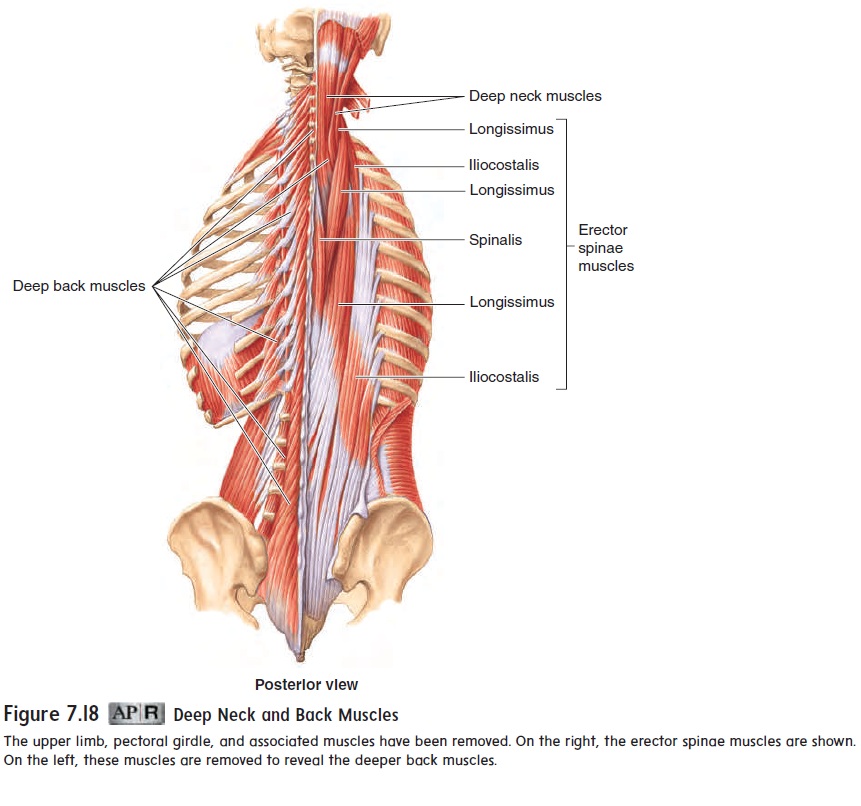