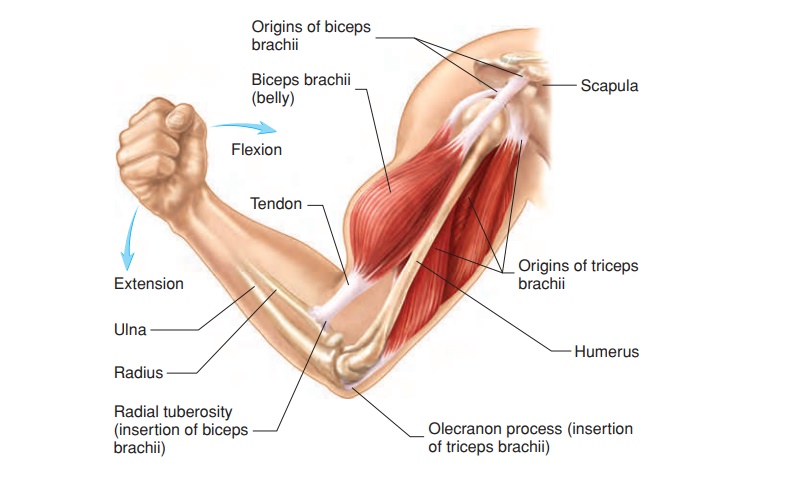 Most muscles extend from one bone to another and cross at least one joint. At each end, the muscle is connected to the bone by a tendon.

Most muscles extend from one bone to another and cross at least one joint. At each end, the muscle is connected to the bone by a tendon. Some broad, sheetlike tendons are called aponeuroses (ap′ō-noo-rō′sēz). A retinaculum (ret-i-nak′ū-lum; bracelet) is a band of con-nective tissue that holds down the tendons at each wrist and ankle. Muscle contraction causes most body movements by pulling one of the bones toward the other across the movable joint. Some muscles are not attached to bone at both ends. For example, some facial muscles attach to the skin, which moves as the muscles contract.

The two points of attachment of each muscle are its origin and insertion. The origin, also called the head, is the most stationary end of the muscle. The insertion is the end of the muscle attached to the bone undergoing the greatest movement. Origins are usually, but not always, proximal or medial to the insertion of a given muscle. The part of the muscle between the origin and the insertion is the belly (figure 7.13). Some muscles have multiple origins; for example,the biceps brachii has two, and the triceps brachii has three. 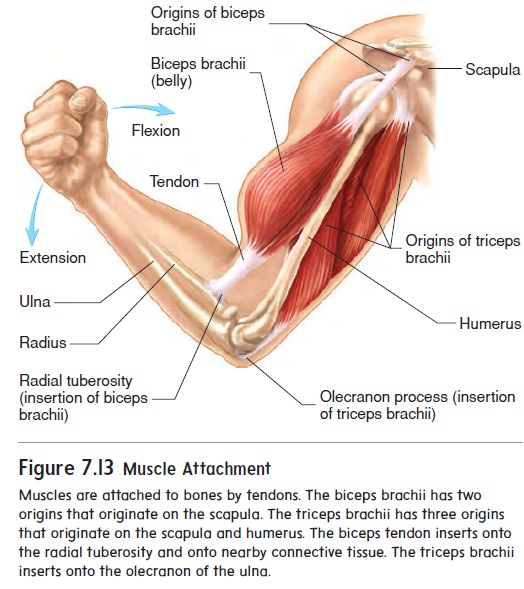 Muscles also tend to function in groups to accomplish specific movements. For example, the deltoid, biceps brachii, and pectoralis major all help flex the shoulder. Furthermore, many muscles are members of more than one group, depending on the type of move-ment being produced. For example, the anterior part of the deltoid muscle functions with the flexors of the shoulder, whereas the poste-rior part functions with the extensors of the shoulder. Members of a group of muscles working together to produce a movement are called synergists (sin′er-jistz). For example, the biceps brachii and the bra-chialis are synergists in elbow flexion. Among a group of synergists, if one muscle plays the major role in accomplishing the desired move-ment, it is called the prime mover. The brachialis is the prime mover in flexing the elbow.Fixators are muscles that hold one bone in place relative to the body while a usually more distal bone is moved. For example, the muscles of the scapula act as fixators to hold the scapula in place while other muscles contract to move the humerus.