Muscle fibers are very energy-demanding cells whether at rest or during any form of exercise.

Muscle fibers are very energy-demanding cells whether at rest or during any form of exercise. This energy comes from either aerobic (with O2) or anaerobic (without O2) ATP production .

Generally, ATP is derived from four processes in skeletal muscle:

1.         Aerobic production of ATP during most exercise and normal conditions

3.         Conversion of a molecule called creatine (krē′a-tēn) phosphate to ATP

4.         Conversion of two ADP to one ATP and one AMP (adenosine monophosphate) during heavy exercise

Historically, it was thought that ATP production in skeletal muscle was clearly delineated into either purely aerobic activities or purely anaerobic activities, and that the product of anaerobic respiration was principally lactic acid. Lactic acid was consid-ered to be a harmful waste product that must be removed from the body. However, it is now widely recognized that anaerobic respiration ultimately gives rise to lactic acid’s alternate chemical form, lactate. Moreover, it is now known that lactate is a critical metabolic intermediate that is formed and utilized continuously even under fully aerobic conditions. Lactate is produced by skeletal muscle cells at all times, but particularly during exercise, and is subsequently broken down (70–75%) or used to make new glucose (30–35%). Thus, the aerobic and anaerobic mechanisms of ATP production are linked through lactate.

Because muscle cells cannot store ATP, how do they generate enough ATP at a rate to keep pace with their high-energy demand? They store a different high-energy molecule called creatine phos-phate. Creatine phosphate provides a means of storing energy that can be rapidly used to help maintain adequate ATP in contracting muscle fibers. During periods of rest, as excess ATP is produced, the excess ATP is used to synthesize creatine phosphate. During exercise, especially at the onset of exercise, the small ATP reserve is quickly depleted. Creatine phosphate is then broken down to directly synthe-size ATP. Some of this ATP is immediately used, and some is used to restore ATP reserves. Figure 7.12 summarizes how aerobic and anaerobic respiration, lactic acid fermentation, and creatine phosphate production interact to produce a continuous supply of ATP. 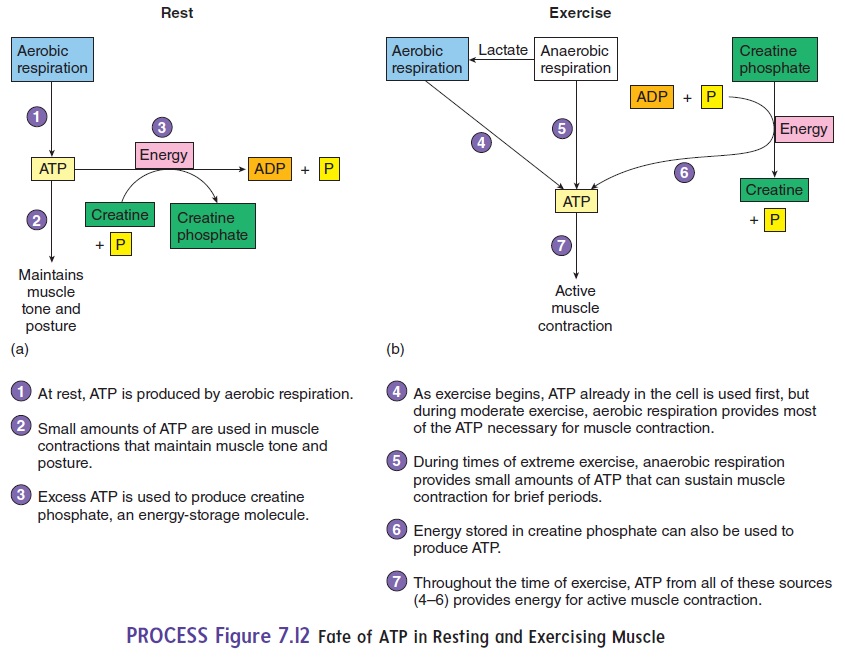 Ultimately, if the use of ATP is greater than the production of ATP, the ATP:ADP ratio decreases, which interferes with the func-tioning of all of the major ATP-dependent enzymes in the muscle fibers. The ATP-dependent enzymes include the myosin head, the sarcoplasmic reticulum Ca2+ re-uptake pump, and the Na+/K+ pump for the resting membrane potential maintenance, all of which are required for proper muscle functioning. If the ATP:ADP ratio declines, an enzyme transfers one phosphate from one ADP to another ADP, generating one ATP and one AMP (adenosine mono-phosphate). The presence of AMP triggers a switch from anaerobic respiration to aerobic respiration of blood glucose and fatty acids. If this switch were not to occur, the muscles could not maintain their activity and could ultimately fail (see “Fatigue” in the next section). Figure 7.12 summarizes how aerobic and anaerobic respiration and creatine phosphate production interact to keep the muscles supplied with the ATP they need.

After intense exercise, the respiratory rate and volume remain elevated for a time, even though the muscles are no longer actively contracting. This increased respiratory activity provides the O2 to pay back the oxygen deficit. The recovery oxygen consumption is the amount of O2 needed in chemical reactions that occur to (1) convert lactate to glucose, (2) replenish the depleted ATP and creatine phosphate stores in muscle fibers, and (3) replenish O2 stores in the lungs, blood, and muscles. After the lactate produced by anaerobic respiration is converted to glucose and creatine phosphate levels are restored, respiration rate returns to normal.

The magnitude of the oxygen deficit depends on the intensity of the exercise, the length of time it was sustained, and the physical condition of the individual. The metabolic capacity of an individual in poor physical condition is much lower than that of a well-trained athlete. With exercise and training, a person’s ability to carry out both aerobic and anaerobic activities is enhanced.