Line executives are the people who are directly involved in the basic activities of an organisation.

The Superiors at each level makes decisions within the scope of the authority delegated to him by his own boss. He communicates his decisions and orders to his subordinates, and it is the duty of the subordinates to follow the orders and instructions given by his superior.

Each position in the structure has general authority over lower positions. Similarly, each position derives authority from the one above. Every person in the organisation is supposed to be accountable to one and only, who delegates authority and assign duties to him. Any departure from this may create problems. For example, if the production manager by passes a foreman and gives instructions directly to a machine-man, he may put the machine-man in a difficult position of being accountable to two persons at one and the same time. This may also upset the foreman’s control over his subordinates (including this particular machine-man) in general.

In this type of organisation there is a vertical line of authority. For this reason, it is given the name “line organisation”.

Line organisation can be of two types: 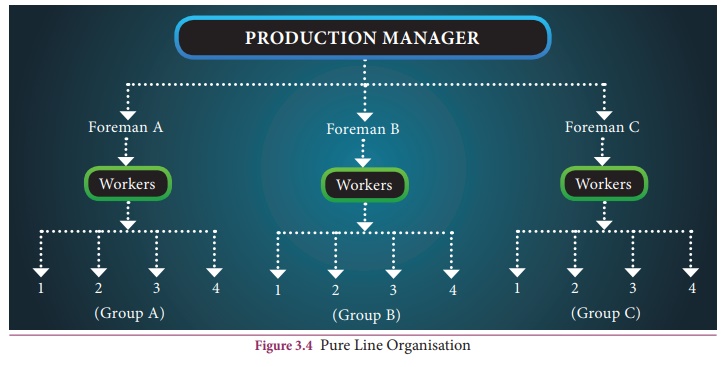 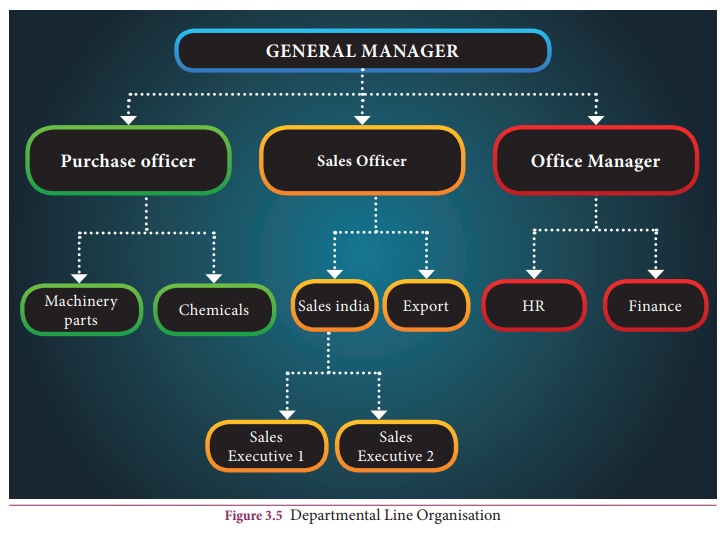 All departmental heads enjoy equal status and authority, also they function independently from one another. For example, the production manager will not interfere in the decision making of sales manager or finance manager and vice versa. Further, no executive in a line organisation should be burdened with supervising a large number of subordinates.

Simple: A line organisation is easy to establish. There are no complications in defining the relationships.

Clear  division  of  authority  and responsibility: Each individual has his area of authority clearly indicated. He also wants to know that he is responsible for his work performance.

Unity of control: Employees are given orders by only one superior and hence a subordinate does not want to carry out the orders of number of superiors.

Speedy action: Decisions can be made and executed promptly due to unity of command and clear division of authority and responsibility.

Flexibility: Each executive understands his role and responsibility and make suitable adjustment to realize the goals set for him.

Lack of specialisation: Line executives are responsible for both planning and execution of the work assigned to them which amounts for too much relying on the capacity and capability of individual executives.

Over burdening of key men: An executive with line authority has complete control over his unit and he is solely responsible for the performance of his subordinates. This places a great burden on a individual.

Limited communication: A Line organisation does not usually provide communication from the subordinate i.e. upward communication. This hinders creativity and capacity for independent thinking of the employee as they develop the habit of working as per orders of their superior.

Subjective approach: A line executive has monopoly over decision – making and he is not obliged to seek advice or listen to line organisation.

Even with its drawback, line system of organisation will be quite suitable for enterprises which are small in size or where the work involved is of a routine nature or machine based.