Formal organisation deliberately and consciously creates for the accomplishment of organisational goal.

According to M. P. Sharma, “Formal organisation means the organisation as deliberately planned, designed and duly sanctioned by competent authority”.

In the words of Barnard, “Formal organisation is a system of consciously coordinated activities or forces of two or more persons”.

4. Co-ordination: It results in coordinating the activities of various departments to attain the common goal.

5. Creation of chain of command: Formal organisational structure clearly defines superior subordinate relationship i.e., who should report to whom?

1. Delay: The actions will get delayed because of following chain of command and scalar chain.

3. Emphasis on work only: It ignores creativity, human relations, talents etc and give importance to work only.

Informal organisation is the outcome of personal and social relationship between the individuals and the organisation. It develops spontaneously as the result of interactions between persons. It exists outside the formal authority system, without any set of rigid rules. It was first systematically explored in the pioneering studies carried on by Elton Mayo and others at the Hawthorne plant of west ern Electric Company. It exists in all the offices such as Government, Private, Public and in business also. In Informal organisation there are no written rules like Formal organisation. It cannot be forced or controlled by the management. There is no defined structure for communication.

According to Chester Barnard, “Informal organisations as the aggregate of personal contacts and interactions and the associated group of people, such organisations is indefinite, structures less and are shapeless mass of varied densities”.

1. Fast Communication: It does follow scalar chain, so the communication will spread faster.

2. Fulfills social needs: It gives importance to psychological and social needs of employees which motivate the employees.

3. Correct feedback: Though the group is informal, they don’t have the fear of the boss, so the employers at top level may get the correct feedback from employees of various departments.

2. Spread rumours: The information may adopt a casual approach to work in an informal atmosphere. This may affect the quality of work.

Comparison between formal and informal organisation 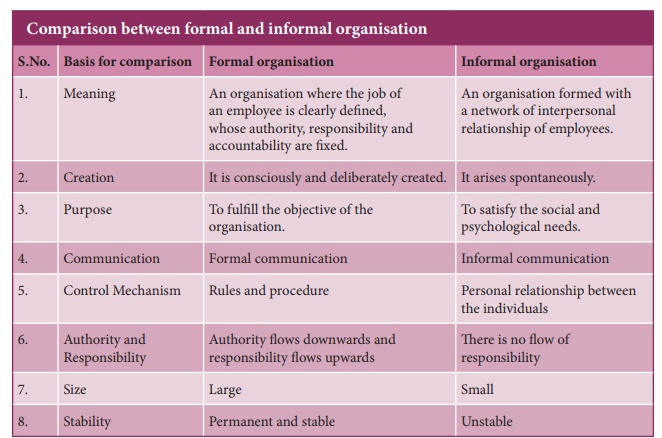