A functional organisation is one where the work is organised on the basis of specialization.

A functional organisation is one where the work is organised on the basis of specialization. In such an organisation, each specialist conveys his instructions direct to the line personnel, rather than through a formal chain of command. This type of organisation was devised by F.W. Taylor, the founder of the scientific management.

The various functional departments in such an organisation provide various services to the line mangers in respect of work study, maintenance, purchase of materials, control of stocks, quality control etc. In the absence of service provided by these departments, the line managers will be required to perform these functions on their own. 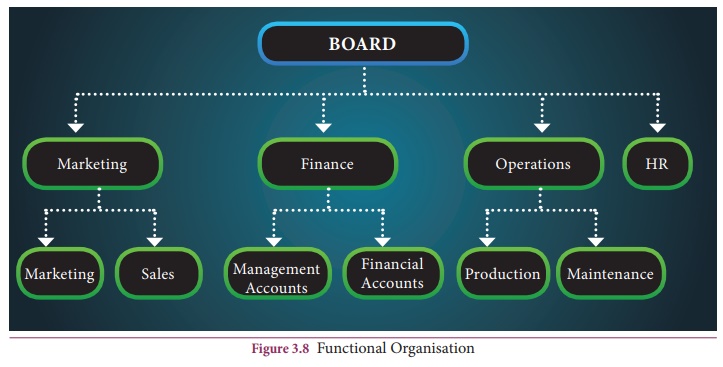 Application of expert knowledge: Functional organisation promotes logical division of work and leads to specialization at every work point.

Efficiency: Since the worker at each point concentrates on fewer activities, he acquires proficiency in his area of work.

Mass Production: Functional organisation leads to specialisation and standardisation which results in increase in production.

Economy: With each activity being in-charge of a number of specialists, there is no need to have well-trained line executives at each work point.

Complex relationships: Functional organisation leads to too many cross-relationships between persons and departments. Since a worker is placed under the charge of a number of bosses, he finds it difficult to link up the different and conflicting orders received from them.

Ineffective Coordination: Difficulty in determination of the limits of authority in case of each specialist creates coordination problems.

Centralisation: Decision making on part of the workers is very limited because of the availability of several specialists to guide and direct them at each work point.

Functional organisation can be suitable for all kinds of enterprises - big or small, machine-based or labour based. But to make a success of it, it should be practiced only at higher levels. If practiced at lower levels, it may create too many cross-relationships in which case it may become difficult to determine who has authority after whom, who is responsible to whom and what work each one is supposed to do.