Yellow pigmentation to the sclera and skin, it is clinically evident when the plasma bilirubin level is above 50 mcmol/L (2.5 mg/dL). - Definition, Incidence, Aetiology, Pathophysiology, Clinical features, Complications, Investigations, Management, Prognosis.

Yellow pigmentation to the sclera and skin, it is clinically evident when the plasma bilirubin level is above 50 mcmol/L (2.5 mg/dL).

Jaundice is due to an abnormality in the metabolism or excretion of bilirubin, which is derived from haem containing proteins such as haemoglobin.

Unconjugated (water insoluble) bilirubin is transported to the liver bound to albumin. It is taken up by hepatocytes and conjugated in a two-stage process to a water soluble form. Bile containing conjugated bilirubin, bile salts, cholesterol, phospholipids and electrolytes is secreted into the intrahepatic bile ducts and passes to the gallbladder via the common hepatic duct where it is stored. Gallbladder contraction (e.g. following a meal) causes bile to pass via the cystic duct into the common bile duct and hence into the duodenum through the ampulla of Vater (see Fig. 5.1). 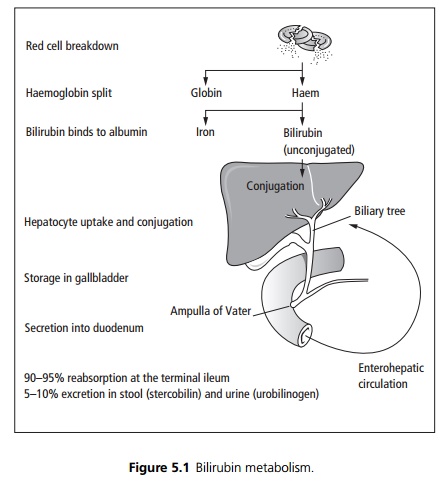 Prehepatic jaundice results from excess bilirubin production (e.g. haemolytic anaemia) or abnormalities in bilirubin conjugation such as occur in some forms of congenital hyperbilirubinaemia (Gilbert’s syndrome and Crigler–Najjar syndrome). The mildly raised serum bilirubin is unconjugated and other liver function tests are normal.

Hepatic jaundice results from hepatocyte damage with or without intrahepatic cholestasis. Causes include hepatitis of any cause, cirrhosis, drugs, liver metastases, sepsis, other liver diseases and some forms of congenital hyperbilirubinaemia (Dubin–Johnson syndrome and Rotor syndrome). There is raised conjugated and un-conjugated bilirubin, and often liver function tests are abnormal due to hepatocyte damage.

Posthepatic jaundice results from obstruction of the biliary tree distal to the bile canaliculi of the liver. Causes include gallstones in the common bile duct, pancreatic cancer, cholangiocarcinoma, primary biliary cirrhosis and primary sclerosing cholangitis. There is a conjugated hyperbilirubinaemia with increased urinary excretion of water-soluble conjugated bilirubin. If there is complete obstruction no bile reaches the bowel. This results in dark urine and pale stools. Liver function tests are usually abnormal. Obstruction of the bile system causes alkaline phosphatase to rise first and proportionally more than the aminotransferases.

A careful history should be taken including the following:

·        Prodromal ‘flulike’ illness up to 2 weeks before onset of jaundice suggests viral hepatitis.

·        Patients should also be asked about jaundiced contacts.

·        An ultrasound should be performed to look for dilated bile ducts, gallstones or other causes of biliary obstruction. Further imaging including ERCP and CT scan of the abdomen may be required.

·        Other investigations should be considered for specific causes such as autoimmune hepatitis, haemochromatosis, primary biliary cirrhosis and Wilson’s disease.